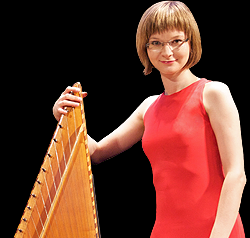 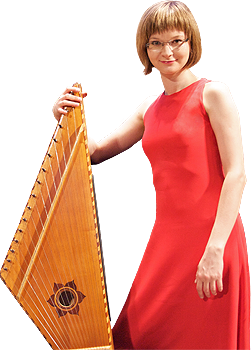 “In Russian tradition, when it comes to playing gusli, men have always been considered superior. Olga however proves that to be wrong, showing with her virtuosity  that women can be equally as good.” (Moscow Gate) 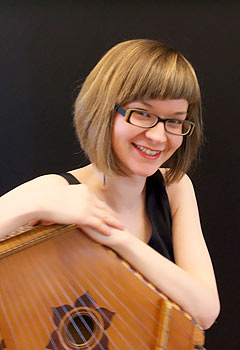 Olga Shishkina, sometimes also Ольга Шишкина or Olga Šiškina (b 1985 in Leningrad) is a prominent internationally active gusli artist. She studied gusli at St Petersburg State Rimsky-Korsakov Conservatoire, in the meantime doing secondary studies in piano, organ and orchestral conducting. In 2008 she graduated from there with the highest honors diploma. In the same year she started her Master’s degree studies in Finnish concert-kantele at Sibelius Academy. Since 2008 Olga has been living and working in Helsinki. At the age of 16 she was awarded 2nd prize at the prestigious 6th All-Russian Competition for professional folk instruments artists (2001, Tver) becoming the youngest prize-winner in the competition’s history. Olga is also the laureate of the International Andreev Competition for young folk instruments players (1996, 1998, 2000, St Petersburg). During her musical career she has been awarded many grants, for example, the special grant from the Russian Ministry of Culture and the scholarship from the New Names Foundation directed by Vladimir Spivakov. In 2001 she was awarded the title Hope of Russia and also got the award from The Worldwide Club of Petersburgers. Apart from performing in Finland and Russia, Olga has given concerts as a soloist and a chamber musician in the USA, the UK, Sweden, Belgium, Estonia, Latvia and Lithuania. She has been playing with the most prestigious Russian folk instruments orchestras such as, for example, Osipov National Academic Orchestra, The State Russian Orchestra of St Petersburg and Smolensk Russian Folk Orchestra. Olga is also the first gusli artist who started to use gusli actively as a solo instrument with a symphony orchestra. She has played with Lithuanian National Symphony Orchestra, St Petersburg Cappella Symphony Orchestra and others. Olga participated in Mariinsky Theatre settings, having played a gusli part in the Rimsky-Korsakov’s opera The Legend of the Invisible City of Kitezh and the Maiden Fevronia (conducted by Valery Gergiev). In autumn 2008 she appeared in Finnish première of Rodion Shchedrin’s opera Enchanted Wanderer with Helsinki Philharmonic Orchestra (conducted by John Storgårds) where she played chromatic gusli. Olga has written a numerous amount of arrangements and transcriptions for gusli with different instrumental combinations where her main goal was to expand the potential of this instrument, bringing it to the new level of virtuosity and expressivity. She invented many new playing techniques for gusli and explored it’s rich timbral opportunities. Being an important part of her repertoire, Olga’s arrangements are still otherwise rarely played by other musicians because of their demanding nature. 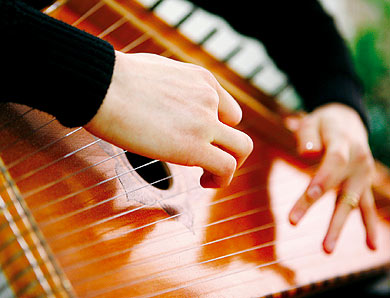 Gusli (гусли) is the oldest Russian string instrument which origins dates back to the 11th century. It may have derived from ancient Egyptian and later Greek lyres and kytharas. Instruments related to gusli can be found in many countries around the world – there is kantele in Finland, kannel in Estonia, kanklės and kokle in Lithuania and Latvia, autoharp in the USA… It’s Asian relatives are Chinese gǔzhēng and Japanese koto. All these instruments are important national symbols but altogether they represent our common global musical heritage. The instrument that you can hear on this CD is a 15 string wing-shaped gusli which is one of the three existing types of the instrument – the other ones are helmet-shaped and chromatic gusli. This model was developed in the beginning of the 20th century by O. Smolenski and N. Privalov who wanted to create a true concert instrument suitable for the acoustics of a big hall. The construction of gusli was changed, and the tension of the strings became much thicker enabling to produce loud sound resembling the bells. Personally, I feel gusli as a very powerful and at the same time sensitive instrument that can express all the richness of human emotions. Even though it has a diatonic scale, the amount of sound colours and technical opportunities is so vast that for me there are no longer any limitations! My goal has always been to make gusli a well-known instrument and I believe it will find more and more fans around the world in the next years. I hope you will enjoy the experience of gusli music as much as I do!

A Shirokov, Variations on a Russian Theme, fragm, 95 sec, mp3