Kannel as an Estonian folk music instrument is known since ages immemorial. Modern times, though, witness the rise of a kannel virtuoso generation that have been educated in Finland, France, Germany… For them kannel is neither a folk instrument nor an experimental or colorful addition to avant-garde music. Kannel stands equal to piano, harpsichord, organ, harp or whatever other instrument used in classical music. Two indisputable virtuosos stand out when it comes to playing Baroque music – they are Anna-Liisa Eller and Hedi Viisma, the latter less known to the Estonian audience owing to the fact that she lives and works mostly abroad. 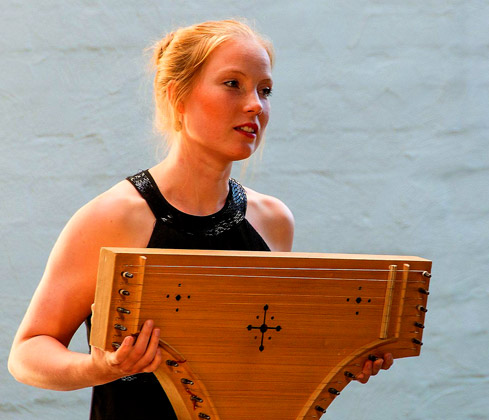 Anna-Liisa Eller graduated from the Estonian Academy of Music and Theatre with a master’s degree cum laude and has also studied in Conservatoire National Supérieur Musique et Danse de Lyon and Staatliche Hochschule für Musik in Trossingen. Since 2016, she continues her doctoral studies in the Estonian Academy of Music and Theatre. Eller has participated in numerous music festivals and achieved awards in international kannel competitions in Vilnius (2008) and Helsinki (2011) where she won frst prize and Koistinen kantele frst special prize. In 2020 her solo CD will be released under Harmonia Mundi. Eller teaches the kannel in Georg Ots Tallinn Music School and Tallinn Music School. Her main focus in music is on early and contemporary music and she works in close cooperation with several early music ensembles, such as Supersonus, Kapsberger, Oni Wytars, Vox Clamantis, Rondellus, Floridante etc.

Hedi Viisma has studied at the Georg Ots Music School and the Sibelius Academy in Helsinki which she graduated from in 2006. In 2019, she received a doctoral degree in the feld of chromatic kantele. Viisma has worked as a teacher at the Georg Ots Music School, Estonian Academy of Music and Theatre and Sibelius Academy. Presently, she lives and works mostly in Helsinki. Together with musicians and composers,  Viisma is actively developing the technical possibilities of the kannel. Her repertoire is very diverse, including music from different eras and styles. Together with Otto Koisti Viisma has developed her current 5-octave and 61-string chromatic kannel which still exists in only one copy, but will hopefully become a new instrument for professional kantele players in the future.