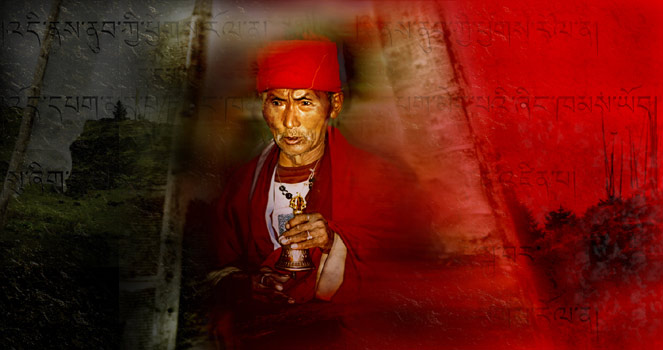 Exploring the Greater Himalayas of Kinnaur, Spiti, Lahaul & Kangra. During the journey, His Holiness the Dalai Lama will give a 2 day teaching and confer the Avalakotieshvera initiation (Chenrezig wangchen) at the Sakya monastery in Kaza. Time to reflect and cultivate loving-kindness and compassion to attain inner and outer peace. 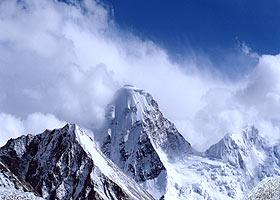 Tibet today has captured world imagination like never before. That Tibet is an integral part of China is an irrefutable fact. His Holiness has given up any thought of complete independence. He merely expects that Tibetans be provided autonomy of their culture and religion. Sadly almost all history and culture of Tibet in Tibet is by now destroyed by the Chinese.
But, Buddhism in the Himalayas began with Guru Padmasambhava the great Indian tantric and it all began in Spiti. During our journey we explore this land which is ‘Forgotten Tibet’. His Holiness has many times stated that if he is allowed to retire, he would like to spend the balance of his life in Tabo because this is closest to his memories of Tibet and this is the birth place of Tibetan Buddhism.
Join us for an intimate experience with the people, the culture, the land and the greatest living teacher of Tibetan Buddhism. This is a journey of solidarity for the Tibetans living in exile from the last 50 years.

July 2nd: arrival in Delhi in the midnight (night of July 1st)

Garland welcome and transfer with assistance to pre-booked hotel. Morning rest and recuperate from long flight. Those with energy can take a stroll around the area near the hotel which boasts café, bookstores and local bazaars. Afternoon sightseeing of Old and New Delhi including a rickshaw ride through the old Chandani Chowk bazaar. Overnight in the hotel.

Transfer to the train station for the Shatabadi Express to Chandigarh (deparfture 7.40 am / arrival 11.10 am). Drive to Shimla, the famous British hill station. Rest of afternoon, evening free on the mall. Overnight in the hotel.

Early morning breakfast, drive to the base of Jhaku (Hanuman) temple. It is a short 15 min climb uphill on well laid-out steps to the temple. Then we drive to Sarahan, a beautiful village surrounded by apple orchards and dominated by Shrikhand Mahadev Peak (5155 m) which resembles the Shiva lingam. We visit the Bhimakali temple, a wonderful mixture of Buddhist and Hindu architecture. It is very sacred to both communities. The Bhimakali goddess idol is approximately 200 years old. Overnight in the hotel.

Sangla valley, also known as Baspa valley, is by far the most beautiful valley of Himachal Pradesh, full of wooded slopes and surrounded by green fields and high mountain peaks as far away as Chitkul, the last inhabited village in this valley. After settling into our deluxe camp, walk across foot bridge to the enchanting village of Bisteri. Overnight in the camp.

Drive to Kalpa enroute visit Rakcham and Kamru villages in the Sangla valley. Looming above Kalpa village is the impressive Mt.Kinner Kailash(6050M/19850 feet). Arrive in time for lunch. Afternoon walk the Old Hindustan Road to Roghi Village. Overnight at the beautiful Kalpa Villa, situated at the base of Mt Kinner Kailash. Overnight in the Hotel.

Full day for walking the ancient and exquisite villages of Chitkul, Chini, Peo, Kothi, Pangi and Telangi. Overnight in the hotel.

The village of Nako lies at an altitude of 3625 m, high above the last stretch of the Spiti valley. It was once a very important centre of Buddhism in the region. There are at least seven temples belonging to different periods between the 11th and 12th centuries distributed all over the village, including a monastic complex on its western edge. Boasting four temples and a number of additional buildings, this complex preserves the earliest artistic heritage. The austere and unornamented exteriors of the buildings give little hint of the important artistic and religious legacy that lies within the walls. Overnight in the camp.

Today we enter the Spiti valley. Geographically and archeologically, Spiti is a living museum. The mountains are devoid of any vegetation due to erosion by wind, sun and snow over thousands of years.
Our vehicles climb up to the village of Tabo (3050 m). Built in the year 996 AD, the Chos Khor monastery at Tabo is the largest monastery in Spiti and one of the few remaining examples of the golden period of Buddhist culture in the Himalayan region. The wall frescos of the monastery are comparable in their antiquity and quality to those of the Ajanta caves, hence they are called the Ajanta of the Himalayas. It houses more than 100 lamas, a large number of scriptures and pieces of art, wall paintings, thangkas and stucco. This monastery follows the Dalai Lama’s sector of Buddhism. We will reach Tabo for lunch. In the afternoon and evening we will visit the Monastery and village. Overnight in the hotel.

Rise early if you want to join the monks in morning puja at Tabo monastery (5 min walk through the village).
We drive to Lhalung which is 14 km from the main road in Lingthi valley. It is a magnificent village of 45 houses. In this village stands the second most interesting monastery of Spiti. The compound consists of 5 buildings. At some spots fragmentary remains of a wall encircling all the buildings can be found. The monastic site of Lhalung once consisted of nine temples. Together with the usually rich interior of Lhalung’s main chapel and the fact that the building of the temples is also attributed to Rinchen Zangpo, it may suggest that the temple site of Lhalung, like Tabo, was designed as a Chokhor site, a place for learning and debate as opposed to a simple chapel for worship by the local people.
We drive onward to Dhankar, the ancient capital of Spiti. Dhankar gompa (3800 m) was built in the 12th century. This hilltop fort dominates the scene and once served as a jail. It contains more that 160 scriptures of lamas and Buddhists in the Bhoti language. A statue of dhyani-Buddha consisting of four complete figures seated back to back is the main attraction of this four to five century-old monastery. Unfortunately, the ancient gompa, situated on the very edge of the peak, is deteriorating. His Holiness the Dalai Lama inaugurated the nearby temple in June 2004. Overnight in the hotel. 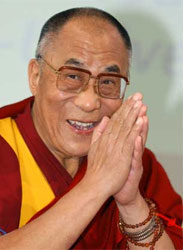 Morning attend the teachings by His Holiness the Dalai Lama: Avalakotieshvera initiation (Chenrezig wangchen). Afternoon, visit the ancient Ki and Kibber gompas and the village of Gete, which are among the highest inhabited villages in the world. Overnight in the hotel.

Morning drive over the famous Kunzum pass, enroute visit Lahaul valley, between Kunzum and Rohtang. The drive offers magnificent views. Continue to Manali over Rohtang la (3980 m). At Rohtang pass we relax and enjoy the breath-taking beauty, with a hot cup of tea. Overnight in the Hotel.

Explore the picturesque Valley of Gods at Manali and Nagar. An easy day of strolling around Manali. Visit Dhungri temple (also known as Hadimba temple by locals) and quaint village of Nagar with its many ancient temples, including the 11th– 12th century temple Gauri and the Tripura Sundri Devi temple. Overnight in the hotel.

Drive through Kullu to Kangra – the Valley of Temples. We visit the most ancient / oldest existing Shiva temples at Baijnath. Overnight in the hotel.

We start with a visit to Bir, a predominantly Buddhist town with some nice new monasteries. Just below the village, a road to the west leads to a tiny Tibetan settlement with a fine gompa which belongs to the nyingma order of Tibetan Buddhism. It is a beautiful and peaceful location. The monks, who are not used to visitors, are very friendly. Many peaks between 3500–5000 m of the Dhauladhar are clearly visible from here. Baijnath (5km) is a pleasant little town surrounded by tea plantations and the Dhauladhar range. It is the village with the oldest existing Shiva temple. Just below the village is the Tashijong gompa, which is the focus of a small Tibetan community who hail from Kham province in Tibet. This fine gompa also belongs to the nyingma order of Tibetan Buddhism. We will visit the Sherabling monastery and hear the award-winning chants of the monks (2003 Grammy Award Winner for Best Traditional World Music Album). Sherabling monastery is nestled in the gentle pine-forested foothills of northern India’s Kangra Valley, the seat of its founder His Eminence Ti Situpa XII, a leading Tibetan Buddhist teacher and peace campaigner. Here the monks perform prayer ceremonies as part of their daily lives, originating many centuries ago in the great Buddhists monasteries of Tibet. The monks begin their day with the Lineage Prayer, offering respect to a line of great meditation practitioners going back as far as the 7th century. The Mahakala ceremony is the part of each day’s closing ritual in which the monks ask for purification and dedicate their blessings to all sentient creatures. We will attend the evening chants beginning at approximately 3 pm. Overnight in the hotel.

Enroute we visit the Institute of Tibetan Arts and Handicrafts in Norbulingka. Upon arrival, we visit the center of Tibetan Medicines and Astrology, time permitting. Afternoon attend puja at the Karmapa monastery . Evening you are free to explore the Tibetan markets. Overnight in the hotel.

Early morning (6 am) walk to the Dalai Lama’s monastery to attend the monk’s puja, afterwards circumambulate the monastery complex along with the locals. Return to hotel for breakfast. After breakfast, we drive to Amritsar, the Himalayan foothills called the Shivaliks. After lunch we visit the Golden Temple of the Sikhs. We will circumambulate the temple, stopping periodically for moments of quite reflection. The temple is like a small community, filled with many different activities. We will visit the kitchen where free meals are prepared by volunteers throughout the day, the temple where the sacred scriptures are read aloud 24/7 non stop and observe devotional rituals. We return to the temple in the evening for the closing ceremony. Overnight in the hotel.

Service includes:
18 nights accommodation in hotels (standard room) on bed & breakfast basis except at Sarahan, Sagla, Kalpa, Nako, Tabo & Kaza which will be on full board basis, accommodation at end in Delhi is for wash & change and dinner before departure. All overland journeys including arrival / departure transfers and sightseeing using good condition Jeep/car, entrance fees to monasteries/monuments/ temples, local guides during the visit of all important places, train fare from Delhi to Chandigarh in a/c chair car, assistance on arrival / departure transfers & garland welcome on arrival in India.