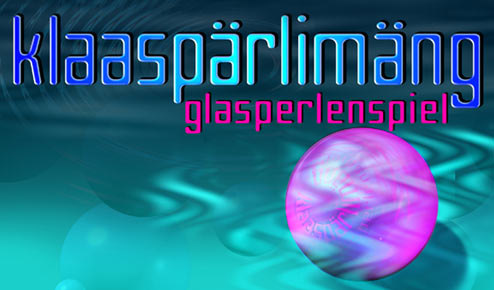 Founded in 1997 by the renowned violinist Gidon Kremer, the Grammy-award winning chamber orchestra Kremerata Baltica is already considered one of the most prominent international ensembles in Europe. Although it originally began as a “birthday present to myself” to celebrate his 50 years of life in 1997, Gidon Kremer immediately envisaged the potential behind the 27-member ensemble of young musicians drawn from Estonia, Latvia and Lithuania as a medium to share his rich artistic experience with the new generation and, at the same time, to promote and inspire the musical and cultural life of the Baltics.
Having opted to make the world their permanent home, Kremerata Baltica annually performs about 60 concerts during 6 annual tours throughout Europe, Asia, and the Americas. Regular performances in Vienna, Berlin, Paris, London, Moscow, and New York in the greatest halls are followed by appearances at renowned music festivals such as Salzburg, Schleswig-Holstein, the Prague Spring and the BBC Proms, etc. 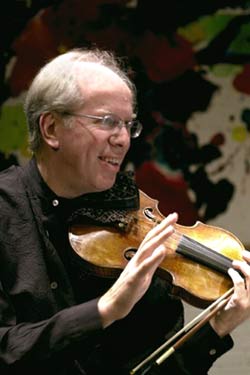 In the 30 year course of his distinguished career, violinist Gidon Kremer, born 1947, has established a worldwide reputation as one of the most original and compelling artists of his generation, praised for his high degree of individualism, his rejection of the well-trodden paths of interpretation, and his search for new possibilities.
Gidon Kremer began studying at the age of 4 with his father and grandfather, who both were professional violinists. At 16 he was awarded the 1st Prize of the Latvian Republic and 2 years later he began his studies with David Oistrakh at the Moscow Conservatoire. He went on to win prestigious awards including the 1976 Queen Elizabeth Competition and the 1st Prize in both the Paganini and Tchaikovsky International Competitions.
An exceptionally prolific recording artist, Gidon Kremer has made more than 100 albums, many of which brought him prestigious international awards and prizes: the Grand prix du Disque, Deutscher Schallplattenpreis, the Ernst-von-Siemens Musikpreis, the Bundesverdienstkreuz, the Premio dell’ Accademia Musicale Chigiana, the Triumph Prize 2000, and in 2001 the Unesco Prize. In 2002 he and Kremerata Baltica were awarded with the Grammy for their latest Nonesuch recording After Mozart.
Gidon Kremer plays a Guarneri del Gesù “ex-David”, dated from 1730. 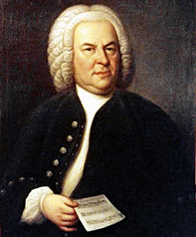 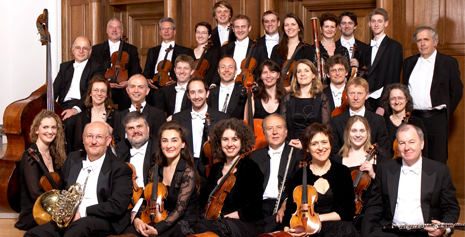 An oxymoron is a figure of speech that combines two normally contradictory terms. Oxymoron is a Greek term derived from oxy (‘sharp’) and moros (‘dull’). Thus the word oxymoron is itself an oxymoron. 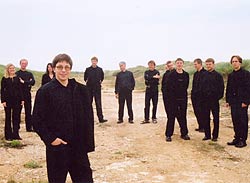 The ensemble was named after an international festival of new music that has been taking place in Tallinn since 1991; the NYYD Ensemble gave its 1st performance at the festival NYYD 1993. The Estonian word nüüd means “now”. The repertoire of the ensemble testifies that they actually interpret the notion “now” as an ample musical landscape involving different stylistic pursuits from the beginning of the 20th cent to the present day – the main criterion of selection is the work’s artistic value. NYYD Ensemble’s repertoire contains works by more than 80 composers from Debussy, Schönberg, and Stravinsky to Tan Dun, Heiner Goebbels and the younger ones. Due to the peculiar needs of some programmes, on rare occasions they have performed the classics as well. The ensemble is obviously in tight contact with Estonian composers. NYYD Ensemble has taken part in all the festivals of new music in Estonia, the most important of which are NYYD and the annual Days of Estonian Music. In the recent years NYYD Ensemble has been receiving more and more invitations to perform abroad. They have performed at several well-known festivals of new music, among others Musiikkin aika (“Time of Music”, Finland), Warsaw Autumn, and Maerzmusik in Berlin. In September they gave 2 different concerts at the festival Klangspuren in Schwaz.

The ethics of reverence for life know nothing of a relative ethic.
(Albert Schweitzer) 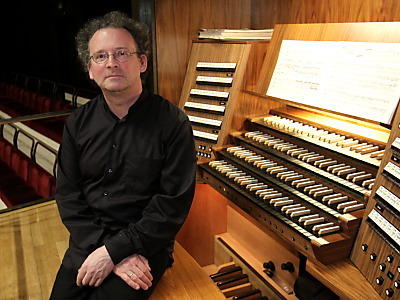 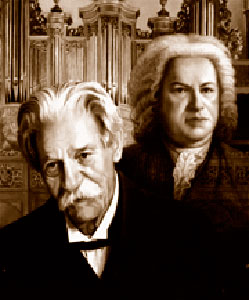 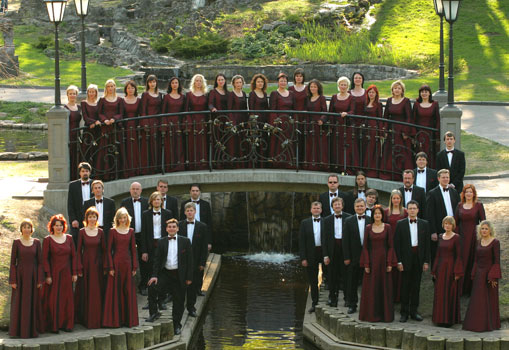 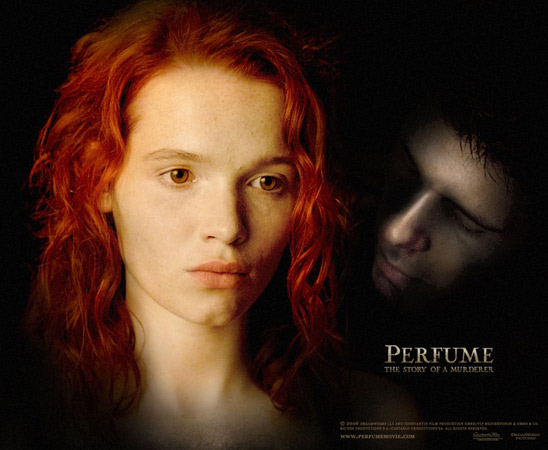 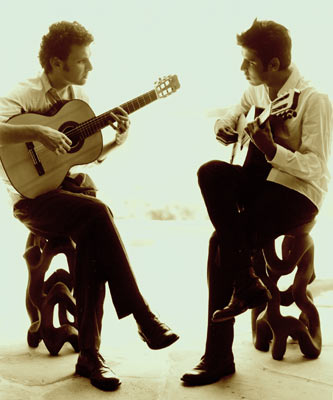 Slava Grigoryan, born in Kazakhstan in 1976 and raised in Australia, he has been performing since he was eight and with major international orchestras since he was 15, including the London Philharmonic, BBC Concert Orchestra, the Sydney Symphony Orchestra and Melbourne Symphony Orchestra. He has also performed at concerts and festivals in Europe, Asia, North and South America, including a Great Guitars Tour with the legendary flamenco guitarist Paco Peña.
As a major prizewinner at the Tokyo International Classical Guitar Competition, Slava was signed by Sony Music Entertainment Australia under Sony Classical in 1995 and has since released four solo albums. His debut classical album for ABC Classics, Sonatas and Fantasies, was awarded Best Classical Album at the 2002 ARIA Awards. Slava has received the ‘Mo Award’ for Instrumentalist of the Year and in 2002, toured for Musica Viva with his brother, Len Grigoryan.  The two enjoyed another highly successful Australia-wide tour in 2003 following the release of Play.
Len Grigoryan was born in 1985 and has been studying the guitar with his father, Eduard Grigoryan, since the age of four. He has won numerous national awards in all categories. Len has performed with Tommy Emmanuel, Kurt Jensen, the Melbourne Mandolin Orchestra, Concordia Ensemble and the Melbourne Musicians’ Chamber Orchestra.
Slava and Len Grigoryan both compose music for guitar and their effortless virtuosity and brilliant musicianship, both in the standard repertoire of the classical guitar as well as crossover material and contemporary composition, is highly regarded around the world. The brothers have recorded a new album for ABC Classics, due for release later this year. During the last year, the duo toured in the United Arab Emirates, South Africa, Australia, Europe, Russia.
Download photo, jpg, 300 dpi, 689 KB 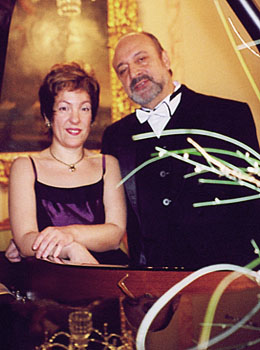 One may say that the artistic personality of Anatoly Safiulin is created by music itself – by Russian folk songs and romances; original chamber music programs of Russian and Western composers’ works and by large-scale compositions as masses, requiems, cantatas, oratorios and symphonies. He is considered to be the true Russian singer of European culture.
Anatoly Safiulin was born in Moscow. In 1977 he graduated from the Russian Academy of Music, where he studied the solo singing under Prof G Aden, one of the most celebrated Russian vocal teachers. Prof Aden revealed to his student the secrets of vocal art, holding the natural beauty of the voice. Throughout many years Anatoly Safiulin was being a soloist of the Moscow State Philharmonics. He has the honorary title of the so-called People’s artist of Russia. Since 2002 he has been living in Germany.
Anatoly Safiulin is a guest soloist at many prestigious music festivals. To quote just some examples: Russian Winter, Moscow Stars, White Nights of St Petersburg, Edinburgh Festival, Prague Spring, All the World Stars, Bilbao Festival, etc. He has been touring intensively all around Russia and performing in London, Paris, Rome, Milan, Florence, Vienna, Cologne, Hamburg, Munich, Glasgow, Geneva, Stockholm, Chicago, New York, Montreal, Ottawa, Tokyo, İstanbul, Tel Aviv, Singapore, etc.
In London Anatoly Safiulin appeared in the role of Salieri for the first time since great Shalyapin had performing it. That was the semi-performance of Rimsky-Korsakov’s opera Mozart And Salieri at the Royal Festival Hall. Princess Diana, who honoured the concert with her presence, gave the singer an audience expressing her gratitude.
During the last decade the bass performed hundreds of large-scale works with the orchestra: requiems and masses by Cimarosa, Mozart, Verdi, Dvořák, Brahms, Faure, Britten, Bach, Beethoven, Schubert; cantatas by Bach, Honegger, Schönberg, Rakhmaninov, Prokofiev, Schnittke; symphonies by Mahler, Shostakovich. The singer has recorded more than 25 CDs.
Since 1997 Anatoly Safiulin has been working with Inna Davidova, the pianist and the artistic director of Herman Braun Foundation. Inna Davidova graduated in 1987 from Latvian Academy of Music. The basic artistic features of Inna Davidova are delicacy and stylistic certainty. She prefers to work with vocalists. Many well-known singers, such as Inessa Galante, Inga Kalna, Antra Bigaca, Elina Garanca, Egils Silins, Jolanta Stanelite, Tatiana Monogarova, Irina Dolzhenko can be listed her best co-workers. The pianist performs regularly in Latvia, Russia, Denmark, UK, Italy, Japan, Canada, the USA, Israel, Slovenia, Sweden. 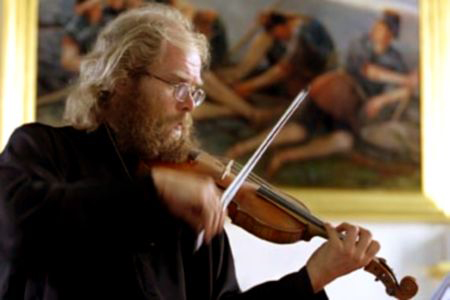 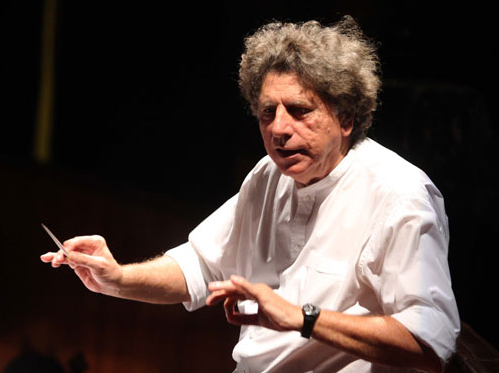 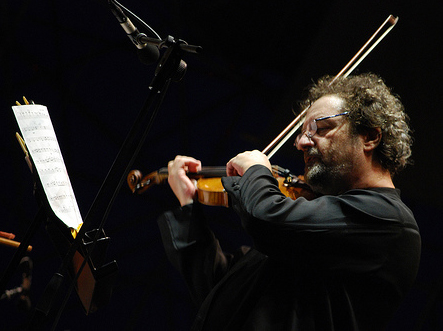 Orchestra Giovanile Italiana has been invited to many of the most important music festivals in Europe including Montpellier, Edinburgh, Ljubljana, Madrid, Frankfurt, Prague and Budapest with outstanding acclaim from both critics and public alike. In 2004, Orchestra Giovanile Italiana celebrated its 20th birthday – an important landmark in the orchestra’s career. In that year the orchestra was busy with important projects such as the extensive tour of South America (Lima, Santiago de Chile, Buenos Aires, Cordoba, Rio de Janeiro, Sao Paulo, etc). The orchestra ended the year with a tour of Italy performing Mahler’s 9th Symphony. This incredible project was the brainchild of Daniele Gatti and here the students played alongside some “old lions” who are at present principals of some of the most important Italian and European orchestras. A CD of the concert was made winning Daniele Gatti the Abbiati prize. Conductors have included Claudio Abbado, Roberto Abbado, Luciano Berio, Gabriele Ferro, Zubin Mehta, Riccardo Muti, Krzysztof Penderecki, and Giuseppe Sinopoli. The orchestra has recorded for Nuova Era, Aulos, Fonit Cetra and Stradivarius. In 2004 the orchestra was awarded the Music Critic’s Abbiati prize. 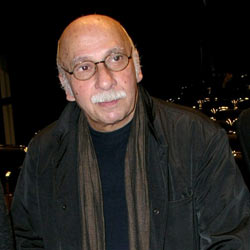 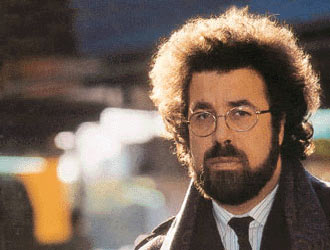 Thanks: Ministry of Culture of Estonia, Cultural Endowment of Estonia, Pärnu City Government