Estonian Music Awards 2023 − the best record of the year in the category of music composing! Nomination for the Classical Album of the Year. 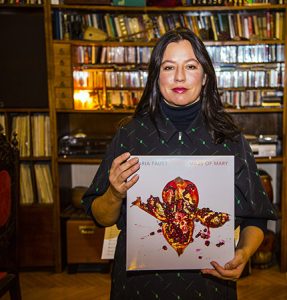 Publisher of the score – Estonian Record Productions
Download a fragment (pages 30–37, Credo) of the score of Mass of Mary
See also Making of... on You Tube

Maria Faust’s Mass of Mary (2020 / 2022) combines the musical influences of medieval music, jazz, sonoristic contemporary music, as well as the older Estonian folk tunes. In itself, it is characteristic of today’s postmodern sense of art that the „new” can often also be a rethinking of the old, time-tested values of musical art, manifested in the contemporary musical context. This is how the transcendent connection between today’s soundscape and the music world of centuries ago could sound like.
Since Mass of Mary is dedicated to victims of domestic violence, the composer has used in her work not only the liturgical Mass text, but also the esteemed playwright Eero Epner’s compilation of samples from texts by Karl Ristikivi and other poets. They give the traditional Mass text in certain parts (Mother, Child, Holy Spirit, and Finale) a more intimate, additional meaning referring to the fragility of family relationships regarding victims of domestic violence.
The sound language of Mass of Mary is relatively experimental in the sense that musical stylistic references alternate quite quickly here. Thus, bright and gentle musical motifs in the female voices of the choir can immediately switch to the jazz-like theme development of the instrumental ensemble (Gloria), and the laconicity, similar to the motifs of the Middle Ages, can be transformed into the artistic „barking” of the male voices of the choir and the mellow whispers of the female voices (Sanctus/Benedictus).
The choir and the instrumental ensemble have different roles within the framework of the Mass of Mary as a whole – while the center of gravity is mainly borne by the choir, the ensemble is left to carry an emphasis on dramatic accents, binding interludes and a „musical commentary”. That way, the music stays in good aural balance, emotionally as well as compositionally. 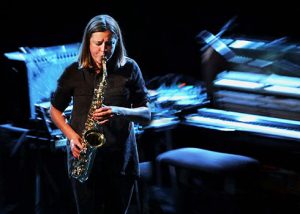 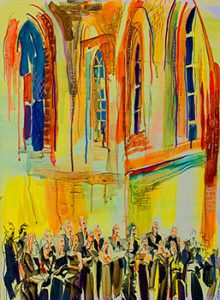 Mass of Mary is, undoubtedly, the most ambitious and most vocal – literally – work of Faust, thematically and musically. Faust weaves a dramatic and highly emotional, moving narrative that expands her open and encompassing musical vision and language. She employs brilliantly the angelic female soloists, the choir, often acting as a choir in the Greek tragedies, and the chamber ensemble of bassoon, trumpet and trombone players, and herself on the alto sax, in a way that colors Mass of Mary in a mythic perspective. (Jan Granlie, salt peanuts*, 06.01.23, Norway, whole article)