The bestseller of ERP! Sold out! “… one of the most beautiful and awesome CDs that the undersigned has ever held in his hands.” (Gerhard Lock, Muusika). Nominee of Estonian Music Award 2005 in the category of classical music.

Recordings from the archives of Estonian Radio, 1960s-2001

Estonian music today can be heard in many of the world’s metropoles. There is Arvo Pärt whose timeless language of music speaks in prayer. There are also ancient Estonian runosongs that sing in the music by Veljo Tormis. We can find the rainbow of postmodern styles in the works by Lepo Sumera and Erkki-Sven Tüür. Conductors Eri Klas and Neeme Järvi have taken Estonian music to the world’s arena. There are  more than 150 symphonies and hundreds of smaller symphonic works that together can by called Estonian Symphonic music, although as a professional genre it is no more than 100 years old. The reasons for that lie deep in the history.
The Republic of Estonia is a small country on the Baltic Sea, bordered in the west by aristocratic Europe, in the east by Asiatic Russia and in the north over the sea by the enlightened Nordic countries. Thus our symphonic music is a melting pot of cultures. For centuries Estonians have been in serfage of various countries like Denmark, Sweden, Germany and Russia − each in their turn. Freedom came only in the 19th century. Enlightenment ideas woke the cultural self-consciousness of Estonians giving birth to the national intelligentsia and starting a powerful movement of National Awakening in which the first All-Estonian Song Festival in 1869 is of utmost importance.
Estonian folk music and European classical music existed for a long time side by side like two total strangers to each other in two different worlds − one in the peasant huts, the other in the rulers’ manor houses, salons and churches. Choral melodies taught Estonians the language of European music. But there was a time discrepancy − while Europe listened to Bach’s counterpoint, Estonians were still singing their folk tunes. 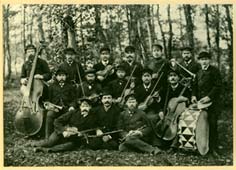 The first Estonian composers received academic education in St Petersburg at the end of the 19th or at the beginning of the 20th century. The “forefathers” of Estonian symphonic music Rudolf Tobias (1873−1918), Artur Kapp (1878−1952), Artur Lemba (1885−1963) and Heino Eller (1887−1970) graduated from St Petersburg Conservatory as students of such grand old men of Russian music like Rimski-Korsakov, Ljadov and Glazunov. The first professionally composed works were born.

The  first Estonian overture Julius Caesar (1896) and the first piano concerto were composed by Rudolf Tobias as his undergraduate work. Artur Kapp composed an overture Don Carlos in 1899. In 1908 the first ever Estonian symphony − Symphony No 1 by Artur Lemba − was performed in St Petersburg. In 1900 the first symphony orchestra of Estonians came into being in Tartu conducted by a graduate of Dresden Conservatory Alexander Läte (1860−1948).
The language of early Estonian music is strongly influenced by classic-romantic sounds. In the first orchestral works romantic heroes fight and suffer. Their gestures can sometimes be a bit clumsy and awkward, their earnestness reflecting the national character but the sincerity of expression is genuine.

The “Fathers” of Estonian symphony

It is a paradox that Estonian symphonic music began before the state of Estonia was founded. Only 1918, in the political chaos of the First World War the Republic of Estonia was born. The same year that a German Oswald Spengler predicted the decline of the Occident, the Estonian culture looked into the future with eyes full of hope and expectations. The crucial question was “Who are we − Estonians?” Rapid development of cultural life started in the young national state. In 1919 Tallinn Higher Music School, the predecessor of today’s Estonian Academy of Music was established. In the university town Tartu Higher Music School was founded. With their creative work and teaching Artur Kapp in Tallinn and Heino Eller in Tartu respectively give the ground and basis for the future of Estonian music.
The honorary place in Artur Kapp’s legacy is taken by five symphonies, instrumental concertos and oratorial works. His forms are monumental. His message is dramatic. He is “ours” and yet he is not. Russian flavour and romantic pathos in his music are tamed by the good old counterpoint. Sometimes, like a cool and crisp Nordic flower, Kapp’s lyric self blossoms up in his works.

Heino Eller represents the other − lyric and sensitive − trend in Estonian music. Besides the bright and radiant Russian orchestral style, his works reflect the west − the influence of impressionism and expressionism. Eller has also composed three symphonies but one does not find romantic world-weariness or Beethoven-like dramas in his work. The best part of his orchestral music consists of symphonic poems and pictures − a colourful, exalted and poetic world of paintings of nature and fantasy. Eller admires every single curve of melody in the music, he thrives for light and colour. He casts into sound form The Cries of Night and popular Burlesque, The Dawn and The Twilight glimmer in his music. Eller is one of those who does  not strangle the Estonian folk tune with the ties of romantic harmony − one of the first to express himself  “in Estonian”. Among the students of Eller are some of the most outstanding symphonists of Estonia −  Eduard Tubin (1905−1982) and later Arvo Pärt (1935), Jaan Rääts (1932) and Lepo Sumera (1950−2000).
The “Father figure” of Estonian symphony Eduard Tubin became a composer at the time when the world’s citizen Igor Stravinski experimented with different style masks and the New Vienna School was destroying tonality. Young Estonian music listens to the new sounds of Europe but avoids extremes, though, and looks for the harmony between classical romantic and folk tradition.

We do not know what paths of development Estonian music would have taken if there had not been the tragic turn in history. The Second World War destroys the young Estonian Republic. The political and cultural élite fly from the Soviet terror and take refuge in the West. Hundreds of thousands are killed. Eduard Tubin emigrates into Sweden and casts his pain and frustration into the Fifth Symphony. The 10 symphonies by Eduard Tubin (1934−1973) reflect history, the first ones depicting the mystery of legends and self-consciuosness of the nation, the later ones expressing the loneliness and nostalgy of exile. The continence of Tubin’s musical language seems almost modern, were it not held together by its conservative form. Both, the neoclassic puls of rhythm and motives of monotonous Estonian runo throb together in his ostinatos. Until today Tubin is the symbol of a tragic interruption in culture.

“The golden age” of Estonian music

The year 1945 brings Soviet occupation into Estonia. Repressions of culture and its supporters continue. The magic formula of Soviet culture is “its socialist content and a national form”. But a nation’s will to live is irrepressible: Estonian culture starts to rebuild itself. After the death of Stalin in 1953 the ideological oppression is deminishing.
A new young generation with new sounds is coming into Estonian music. That period will later be called “the golden age”. The starworks of the new era are Concerto Grosso (1956) by Eino Tamberg (1930), Concerto for chamber orchestra No 1, Op16 (1961) by Jaan Rääts and Overture No 2 (1959) by Veljo Tormis (1930). Despite the different messages their common denominator is the neoclassic pulse of rhythm.
Soviet pathos and modernist chastity come to an agreement in the ostinatos of the Concerto for Chamber Orchestra by Rääts. History and suffering have been overcome. A small amount of very typical Estonian irony is concealed behind the rhythms.

Eino Tamberg takes a road in the opposite direction. Despite the neoclassic kickoff his music breathes with tradition. Tamberg becomes the poet and bard of love in Estonian music. With sounds, his works unite forms of poetry, literature and fine arts. Tamberg is the author of numerous stage pieces, instrumental concertos as well as four symphonies (1978, 1986, 1989, 1998). The common denominator in his creation is a strong dramatic basis. It is served by his pluralist language of music: minimalism and expressionism, romantic harmony and modern ostinatos. More and more, expressionist sound form takes over in his work during the 90s. To sum it up Tamberg is a romantic and a playwright. Symbols of beauty glimmer in his music and regardless of the means he is striving for catharsis.
Also, Overture No 2 (1961) by Veljo Tormis was not a pure neoclassic play of form. The tragic ostinatos of this work carry on the rhythm of protest from the Fifth Symphony by Eduard Tubin.

The Time of Synthesis

While modernism in Europe becomes more and more a sheer play of form, in Estonia it starts speaking in different secret languages. Tormis opts for choral sound and folk tune. Arvo Pärt takes the road from tragic collage to tintinnabuli-style. From the 70s onwards Estonian music is not only seeking new means of expression but also new ideas. In the 80s synthesis of expression is being looked for.

Lepo Sumera (1950−2000), the last student of Heino Eller and one of the most brilliant Estonian symphonists is the first seeker of synthesis. In his 1st and 2nd symphonies (1981, 1984) dreamlike minimalist repetitions and large-scale dynamics melt into one. In the next ones (3rd − 1988, 4th “Serena Borealis” − 1992, 5th − 1995, 6th − 2000) his expressionist mode of speech deepens. The forms of tenderness and brutality collide. Soundchaos alternates with frozen time. As a symphonist Sumera is mercilessly earnest. In smaller orchestral forms he affords the child’s play of sound imitations. Sumera’s syntheses are intuitive and sensitive. From the effort to unite almost romantic flights of soul rise.

In the 80s also Erkki-Sven Tüür, a student of Rääts and Sumera, finds his way into Estonian music. Physically residing on a small Estonian island of Hiiumaa he creates his work in the global sound space. Music by Tüür today is commissioned by renowned international musicians and is more often than not first performed on the world’s stages. Tüür’s aim is provocative and reckless – to melt into music a “catalogue” of the 20th century styles. He has composed five symphonies (1984, 1987, 1997, 2002, 2004), instrumental concertos, a number of shorter symphonic pieces, an opera, a cycle for chamber ensemble Architectonics. There are undercurrents from the neostyle sources and rock music to sonorism and minimalism in his music. It could be taken for a pure fun of experimentalism. While listening one might perceive Tüür’s sound as if from another world − it is like a reflection of human existential consciousness − metaphysical desert of soul, lonely battles. In the recent works by Tüür one can sense the passion and tenderness of monologue, neoromantic glimmer, the signs of reconciliation and beauty.
At the beginning of the 90s Estonia re-established its independence. Estonian music got switched into the blood circulation of global culture. Symphonic music acquired new forms, masterly sound painting, exotic styles of melody − and new sense of life. The dominance of romantic drama and rhythm machine was broken. The names of Helena Tulve (1972), Toivo Tulev (1958), Tõnu Kõrvits (1969) and many more have found their way into the world. The music of today depicts dangerous and beautiful landscapes of human consciousness − or paints pictures of nature. Sometimes it is quite close to the sense of life that shimmers in the pictures of fantasy by the national classic Heino Eller.