PEETER VÄHI
2000 Years After the Birth of Christ

Every page of the score radiates with the author’s conviction that he is standing at “the end of the cultural history of the Occident”. It may sound too pretentious, but in my eyes “2000 Years After The Birth Of Christ” is something like a philosophical-musical summary of the history of Europe. (CD-booklet, 1995) 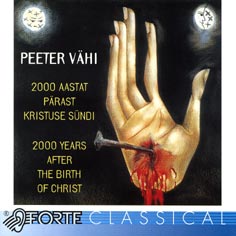 This extensive composition is based not so much on musical ideas, but rather on conceptions derived from the author’s world view. Vähi’s philosophical and aesthetic viewpoints regarding music history seem to be highly subjective, and yet they are interesting and fully relevant as the basis for his composition.
The author himself has written in the concert-program: “I tried to contrast two absolutely different sides. One of them is the stylized music of the European Golden Age, as performed by the Early Music Consort. This is contrasted with the music of Untergang des Abendlandes, performed by a contemporary symphony orchestra. It is true that we still do live in 20th century, but the era of extreme avant-garde is over and so it is possible to take a retrospective approach to it as a phenomena belonging to the past. In order to achieve a sharper contrast in essence and also some outward theatricality, I originally planned a separate conductor for each orchestra, but due to technical complexity the idea will not be carried out in the present performance. /…/ Being aware that it is hardly possible to date the ups and downs of European culture or to define them in the terms of styles of music, I do not try to pretend to be objective in my estimations. The creation of music is a very personal, one might even say, an intimate matter. And in the process of creating the present work, the only thing that mattered was that I thought so… The rest is of no importance.”
The first performance (1990) was a source of controversies in the musical circles. I about a week’s time, reviews were published in almost all of the greatest newspapers of Estonia. I fully agree with one of the critics who said that Vähi’s intuition turned out to be deeper than the verbal principles formulated by him in the program. The work has many more faces which the composer would not or could not point out. The work reflects, to some extent, the attitude of Estonians towards Lutherian Christianity, the attitude of the Baltic people towards the German culture. Also, his music reveals the composer’s power to transcend the duality of good and bad, to transcend the dualist world view… Every page of the score radiates with the author’s conviction that he is standing at “the end of the cultural history of the Occident”. It may sound too pretentious, but in my eyes 2000 Years After the Birth of Christ is something like a philosophical-musical summary of the history of Europe. 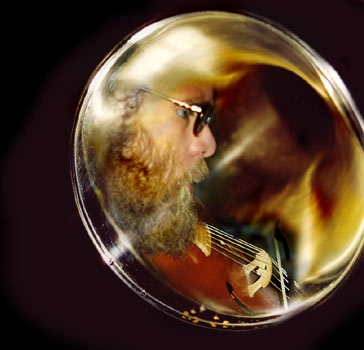 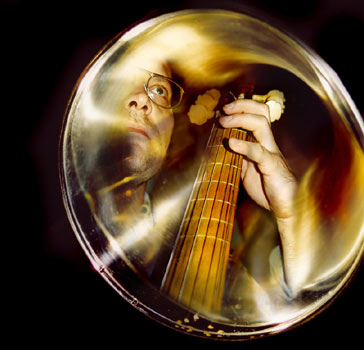 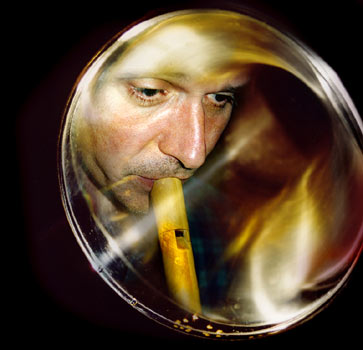 In 1972 the first performance of the early music consort Hortus Musicus (‘Music Garden’) initiated a new tradition in the Estonian music life. The founder, leader, and most radiant figure of Hortus Musicus is Andres Mustonen. The consort has been the first in the Estonian interpretation lore, one of the first of the Soviet Union and the Nordic countries to bring so methodically and such interesting programs the rich and largely undiscovered inheritance of early music closer to the listener. The real province of Hortus Musicus is non-ethnical European music from its start to late Renaissance and the masters of Baroque. This also explains the choice of instruments and the cast of the consort. The musicians are not only interested in the beauty of the lyrics and music but rather try to interpret the era as such and convey their attitude to what is being performed. Each Hortus Musicus’ evening is like a musical performance with original instruments and authentic attire. The staging is polished and “through-composed” – everything is essential, from strokes to the chair on which the musician is sitting on the stage. In short, you are attending ”…attractive and technically sure performances…” (The New York Times). The intense and wide scale concert life has secured concert halls for Hortus Musicus nights in different parts of the world. From the start, Hortus Musicus has participated in number of international festivals and music festivities (Holland Festival, Die Berliner Festwochen, Glasperlenspiel, Music of Old Cracow, Tel Aviv Festival, Copenhagen Summer, Helsinki Festival, Bratislava Autumn, Malmö Baroque, Prague Spring, Dubrovnik and Plovdiv Festivals, Boston Festival). Since 1976, Hortus Musicus has worked under the auspices of Eesti Kontsert, the National Concert Institute of Estonia.

See other records of Peeter Vähi: Maria Magdalena, A Chant of Bamboo, Supreme Silence, To His Highness Salvador D, Tamula Fire Collage, The Path to the Heart of Asia, Handbell Symphony, Sounds of the Silver Moon