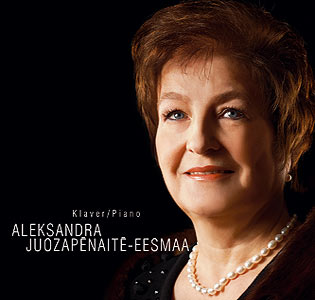 I have always had a tremendous need to express myself. Sound, harmony and keys mean a lot to me. I keep searching for new intonations and tones because the language of music offers me endless possibilities to express myself. (Aleksandra Juozapénaité-Eesmaa)

Jean-Philippe Rameau (1683 Dijon − 1764 Paris) was a French harpsichord player, organist, music theorist and composer, whose prime time was in the fine and playful Rococo era. Coming from a family of musicians, he worked in Dijon, Clermont-Ferrand, as well as in Paris, where he stayed since 1723. At first Rameau became successful as an organist, harpsichord player and a music theorist, publishing in 1722 the famous Treatise on Harmonie (Traité de l’harmonie) that became the basis of classical use of harmony. In the second part of his life Rameau composed a lot of music for stage − musical tragedies and opera-ballets. On the disc you will hear pieces from his second harpsichord suite (1724) − dances and virtuous character pieces that quickly became very popular.
The next era in music history, the Classicism, is represented by Joseph Haydn’s (1732 Rohrau − 1809 Vienna) Variations in F minor. Haydn was one of the founders of the Viennese classic piano style. He was influenced by the keyboard music of Johann Sebastian Bach’s most famous son Carl Philipp Emanuel, whereas his virtuosity and boundless imagination found a classical balance in Haydn’s works. Variations in F minor Hob XVII:6 belong to Haydn’s latest period, when the composer had become famous all over Europe and had received orders from Paris and London. It was written in 1793, between two trips to London. Already the theme of the variations (Andante) is notable for its extent and seriousness. Two separate parts in minor and major are opposed to each other and are developed with great variety. The large-scale coda fully demonstrates the expressive and technical possibilities of the instrument in its time.
The sound worlds in the music of the French Impressionists Debussy and Ravel are totally different. Claude Debussy’s (1862 Saint-Germain-en-Laye − 1918 Paris) work emphasized the game of colour and light − freely dealt harmonial successions that also influence the use of the instrument and an exceptionally fine timbre palette. These help to record fleeting moments in sounds as we hear in the cycle Images. The first set (1905) also focuses on the clarity of a musical idea. Debussy himself considered it to be a new stage in his creative evolution, saying jokingly that these pieces put him “on the left hand of Schumann and on the right of Chopin” on the Avenue of Piano Music. The first piece in the set, Reflections in the Water (Reflets dans l’eau) exhibits the Impressionists’ interest in ref-lecting light on a changing surface and ways of expressing that in music. In Homage to Rameau (Hommage à Rameau) Debussy fills an old dance form sarabande  with new sounds and structure, the piece being inspired by one of the melodies in Rameau’s opera Castor et Pollux. The third piece Movement (Mouvement) is like a 20th century perpetuum mobile.
The idea of Maurice Ravel’s (1875 Ciboure − 1937 Paris) Valses nobles et sentimentales is inspired by Franz Schubert’s waltz chains (Ravel’s work includes 8 waltzes) and exhibit Ravel’s general interest in movement and dance. It was completed in 1911 and the following year Ravel published an orchestrated version of it, which the ballet Adélaïde or the Language of Flowers (Adélaïde ou le langage des fleurs) is based on. There is a romantic touch in Ravel’s graceful and elegant waltzes. In pre-WW I music we often find the last reflections of the Romantic era. Ravel’s innovative harmony had a noticeable effect on his piano playing and made it possible to expand his playing techniques, bringing the virtuosity of Liszt to another level.
The composer, pianist and organist Olivier Messiaen’s (1908 Avignon − 1992 Paris) work is based on the Impressionist traditions of French music. It is also influenced by Gregorian chants, the rhythms of India, the sound and rhythm of the Javanese gamelan orchestra and his passionate interest in birdsong that Messiaen notated and incorporated into his music. The 12 pieces in Bird Catalogue (Catalogue d’oiseaux; 1956−1958) attempt to resemble the singing styles of the birds of French countryside, the Golden oriole (Loriot) among them.

The second CD on Aleksandra Juozapénaité-Eesmaa’s portrait album continues to unravel the possibilities and contrasts of music at the end of the 19th century and in the 20th century. The Spanish (Catalonian) composer Isaac Albéniz (1860 Camprodón − 1909 Camboles-Bains) was a child prodigy whose public performances  as a pianist started already at the age of 4 and at the age of 6 he continued his studies in Paris, which later became his main place of residence. As a virtuoso Albéniz melded in his work the the piano playing of Liszt, Spanish dance rhythms and the timbers of French music. The Spanish Suite (Suite española) originally consisted of four parts (created in 1886) and it was only after Albéniz’s death   that the publisher Hofmeister added four more parts. The suite depicts dance and everyday music of Spanish towns and counties (Granada is represented by a serenade; Aragon by a fantasy in the style of  jota; Cuba, at that time a Spanish colony, by dance rhythms Notturno; Cadiz by a religious song Saeta; in the Asturian Legend we hear influences of flamenco etc).
Estonian composer Heino Eller (1887 Tartu − 1970 Tallinn) was a student of Saint Petersburg Conservatory, one of the founders of Modernism in 20th century Estonian music, also a renowned composition professor, among whose students were Eduard Tubin (1905−1982) and Arvo Pärt (b 1935).  Eller’s second piano sonata (1938) is full of movement and deliberate images: Part I Allegro starts as a storm with an overwhelming theme and it seems that the same energy culminates in the last part (Presto) as a fascination with motorics, typical of that time. The lyrical middle part is slow and meditative (Andante penserioso).
Béla Bartók (1881 Nagyszentmiklós − 1945 New York) represented in the 20th century a musician, who was both a composer and an interpreter, in his case a distinguished pianist. Bartók wrote the piano sonata (1926) mainly for his own performances. Bartók’s forceful piano playing, inspired by the sound of percussion instruments, is demonstrated in the first part of the sonata Allegro moderato with its hammering ostinato-rhythms. At the culmination there is a thick  fugato. The second part Sostenuto e pesante is on the other hand characterized by static harmonies that the melody line attempts to penetrate, but with no success. The third part (Allegro molto) brings rondo form, the chorus reminding an Hungarian dance song. The last part of the finale gives a hint of Bartók’s piano piece Allegro barbaro, that in 1911 created a stir with its forceful rhythms.
The end of Aleksandra Juozapénaité-Eesmaa’s album pays  homage to old French music − the last piece is Gavotte in A major by Jean-Philippe Rameau. 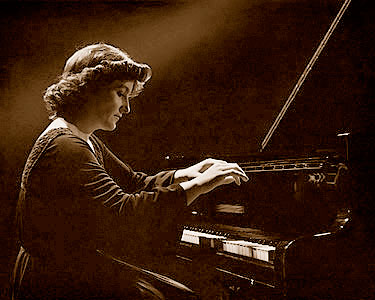 Aleksandra Juozapénaité-Eesmaa (1943−2012) had her debut at the age of 9 performing Piano Concerto in D Major by Haydn together with Lithuanian National Symphony Orchestra. At the age of 14 she gave her first solo concert. Her quick development took the pianist after two years in the Lithuanian Academy of Music to the Conservatory of Moscow to Prof Jakov Zak under whose supervision and guidance she also took her post-graduate course. 1976−1977 Juozapénaité-Eesmaa had the luck to study in Paris National Conservatory. Under the tuition of professors Claude Helffer and Yvonne Loriod (the wife of Olivier Messiaen) she dedicated most of her time and effort to French contemporary music. Being an extremely talented pianist her Paris connections offered many an opportunity to discover the world, had the ideological discrepancy between East and West not been an unovercomeable obstacle at that time. Still, the year in Paris gave that profound knowledge of French contemporary music that in 1993 the French record company JADE ordered from her the recording of the cycle Twenty Glances at Jesus-Child by Olivier Messiaen. Later this cycle in Juozapénaité-Eesmaa’s performance was released as a double-CD in the year 2001 being a co-operation project of Lithuania and Austria through record company “Semplice”. The current CD is Juozapénaité-Eesmaa’s 11th. She has recorded for the radios of Vilnius, Tallinn, Moscow, Paris and Amsterdam focusing on French, Estonian and Lithuanian music. She has frequently been the first performer of several works. Likewise, the present is the first recording of Sonata No 1 by Eller. Among her achievements are various diplomas and titles from international competitions and the 1st prize in the International Piano Competition named after Čiurlionis 1968. She has given recitals as well as performed together with orchestras in Lithuania, Estonia, Latvia, Russia, the Ukraine, Belorussia, Poland, Hungary, France, Germany, Holland, Sweden and Finland.
“She is an artist that has a message to deliver, who always plays exemplarily true-to-text and with polished preciseness; who has good taste and sense of tact, whose emotions and reason live in harmony and perfect balance. At the same time she always possesses an attitude of her own towards the music to be performed.” (Bruno Lukk)
“Happy times”, the pianist said about the recording of the present CD in spring-summer 2001. “I like to work with concentration. Emotions and dramatism suit me, I am glad that I can express it.” Aleksandra Juozapénaité-Eesmaa has passion, grasp and power, sometimes even pathos − and at the same time also sufficient clarity, preciseness, respect and distance. These are the characteristic features of her interpretation of Eller’s work.