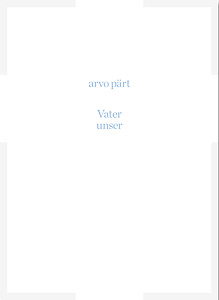 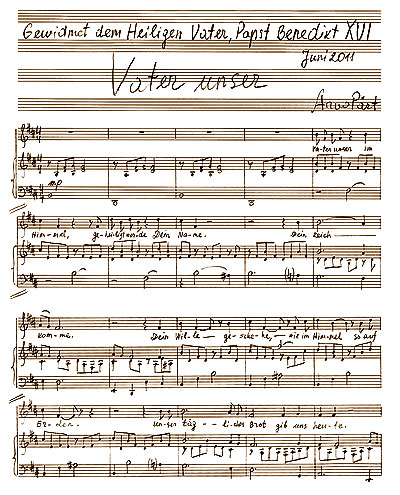 Special thanks to Nora Pärt and Zoja Hertz

In English:
Our Father in heaven, hallowed be your name.
Your kingdom come, your will be done, on earth as it is in heaven.
Give us this day our daily bread, and forgive us our debts, as we also have forgiven our debtors.
And lead us not into temptation, but deliver us from evil. 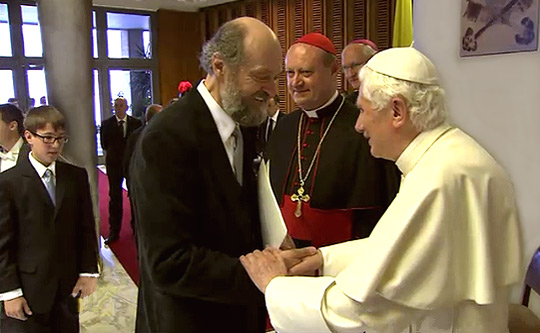 Arvo Pärt was born on Sep 11th, 1935. He graduated from the Estonian Academy of Music in 1963.
The early 60s in Estonia saw many new methods of composition being brought into use and Pärt was at the fore front. His Nekrolog was the first Estonian composition to employ serial technique. He continued with serialism through to the mid 60s in the Symphony No 1, Symphony No 2 and Perpetuum Mobile, but ultimately tired of its rigours and moved on to experiment, in works such as Collage über BACH, with collage techniques.
Official judgement of Pärt’s music veered between extremes, with certain works being praised and others, like the Credo of 1968, being banned. This would prove to be the last of his collage pieces and after its composition, Pärt chose to enter the first of several periods of contemplative silence, also using the time to study French and Franco-Flemish choral music from the 14th to 16th centuries: Machaut, Ockeghem, Obrecht, Josquin. At the beginning of the 70s, he wrote a few transitional compositions in the spirit of early European polyphony, like his Symphony No 3.
Pärt turned again to self-imposed silence, but re-emerged in 1976 after a transformation so radical as to make his previous music almost unrecognizable as that of the same composer. The technique he invented, or discovered, and to which he has remained loyal, practically without exception, he calls tintinnabuli (‘little bells’), which he describes thus: “I have discovered that it is enough when a single note is beautifully played. This one note, or a silent beat, or a moment of silence, comforts me. I work with very few elements – with one voice, two voices. I build with primitive materials − with the triad, with one specific tonality. The three notes of a triad are like bells and that is why I call it tintinnabulation.” The basic guiding principle behind tintinnabulation of composing two simultaneous voices as one line – one voice moving stepwise from and to a central pitch, first up then down, and the other sounding the notes of the triad − made its first public appearance in the short piano piece Für Alina.
Having found his voice, there was a subsequent rush of new works and three of the 1977 pieces − Fratres, Cantus in Memory of Benjamin Britten, and Tabula Rasa − are still amongst his most highly regarded. As Pärt’s music began to be performed in the west and he continued to struggle against Soviet officialdom, his frustration ultimately forced him, his wife Nora and their two sons, to emigrate in 1980. They never made it to their intended destination of Israel but, with the assistance of his publisher in the West, settled firstly in Vienna. One year later he moved to Berlin.
Pärt has concentrated on setting religious texts, which have proved popular with choirs and ensembles around the world. Among his champions in the West have been ECM Records who released the first recordings of Pärt’s music outside the Soviet bloc, Hilliard Ensemble who have premièred several of the vocal works, and Neeme Järvi who conducted the première of Credo in Tallinn in 1968, and has, as well as recording the tintinnabuli pieces, introduced Pärt’s earlier compositions through performances and recordings.
Pärt’s achievements were honoured in his 61st year by his election to the American Academy of Arts and Letters. In May 2003, he also received the Contemporary Music Award at the Royal Albert Hall in London, and in May 2011, again in Royal Albert Hall won the Classic BRIT Award Composer of the Year 2011.

On the current CD we hear the crystal clear voice of a boy soprano Heldur Harry Põlda, a violin and conducting student at the Tallinn Music College who has rocketed to stardom as a singer and performer of classical music. Born in Kuressaare, the boy began his career 6 years ago after the family moved to Tallinn. Besides violin studies with Prof Mari Tampere-Bezrodny and vocal studies with Zoja Hertz, Heldur Harry sings in the Estonian National Opera Boys’ Choir and performs regularly as a soloist with different musicians and orchestras. He made his stage debut at the age of 8. Now, 5 years later, his repertoire contains several musical and opera roles as well as soprano parts in various oratorial works. He has performed together with renowned opera singers in Estonia, Latvia, Spain and Germany. In 2008, Heldur Harry received the Estonian Culture Endowment Annual Award for his role of Miles in Britten’s opera The Turn of the Screw, being the youngest ever laureate of the prize.

Dowload: Producer’s notes about the recording of Vater unser (in Estonian, pdf)