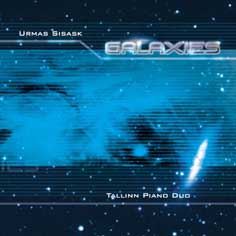 Our 17 billion years old universe is a huge “organ” invented by Jehovah. Due to the force of gravity galaxies, stars, planets, comets and others constellations form gigantic organ pipes. That is the Credo of My life and work. To learn the harmony of the musical instrument of the universe and to make it heard to the people is My mission. Thus, I do not consider myself a composer but a “recorder of music”. (Urmas Sisask)

Recorded at Estonia Concert Hall, Tallinn in 2001
Engineered by Priit Kuulberg
Booklet compiled by Elle Himma
Translated by Tiina Jokinen
Designed by Piret Mikk
Thanks: Cultural Endowment of Estonia, Ministry of Culture of Estonia
Produced by Peeter Vähi
Published by Edition 49
Produced by ERP for Edition 49

Nata-Ly Sakkos and Toivo Peäske have both graduated from the Estonian Academy of Music, taken their postgraduate course at the St Petersburg Conservatory named after N. Rimski-Korsakov and presently teach chamber ensemble at the Estonian Academy of Music. Their duo’s repertoire contains practically all the classical works for two pianos and also a number of pieces for four hands. Recently the duo’s 25th jubilee was celebrated with a Festival for Piano Duos.

Urmas Sisask, a composer and an amateur astronomer, was born in 1960. His main activities, besides composing classical new music, include astronomic observations and numerous concert lectures in the “musical planetarium” in his native village of Jäneda. Urmas Sisask’s interest in shamanistic activities was deepened during the so-called Singing Revolution, and he feels that rituals represent one of the most important forces that help us carry on.