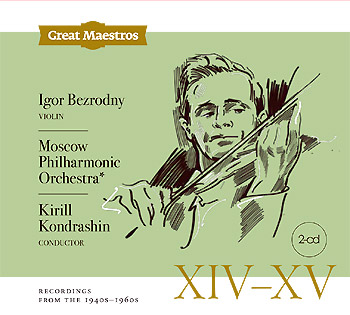 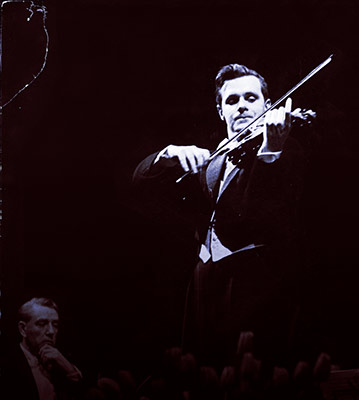 The 20th century was the golden age of the Russian violin school. World-known Heifetz and Elman names were followed by a Pleiad of Soviet violin virtuosos whose impact on the musical world of their days cannot be underestimated. One of the most brilliant representatives of this generation is Igor Bezrodny. Combining perfect technique and thoughtful interpretation, wide worldview and outstanding pedagogical talent, maestro left a rich creative heritage and a significant mark on the musical life of his time as well as on his numerous students.
Coming from a family of musicians, Igor Bezrodny (1930–1997) was exposed to music at a very early age – both parents were valued violinists and acknowledged violin teachers. Bezrodny continued family tradition and in 1937 became a student of Professor Abram Yampolsky, a legendary teacher who brought up a whole generation of prominent violin players. This long-time collaboration greatly influenced the formation of Bezrodny as a musician and later as a teacher. The success came quickly for the young violinist: first prizes at the First World Festival of Youth and Students in Prague (1947), Jan Kubelík Competition in Prague (1949) and the International Johann Sebastian Bach Competition in Leipzig (1950). Due to these victories he was awarded the Stalin Prize in 1951. During the 1950s he started a large-scale concert activity that brought him to many foreign countries in addition to the Soviet Union. He played with the best musicians of his time (Neuhaus, Oistrakh, Bashkirov, Flier) and performed in world-famous concert halls (Carnegie Hall, Concertgebouw, Musikverein, Royal Albert Hall, La Scala). As the first Soviet violinist, he visited several countries in Central and South America, such as Mexico, Costa Rica, Cuba, Ecuador, Peru and Uruguay, being a kind of ambassador for the Soviet violin school in this part of the world, and was also especially loved in Japan.
The wide circle of Bezrodny’s both musical and non-musical interests is astonishing. In addition to the violinist Bezrodny, the conductor Bezrodny is also known. A strong interest in conducting, expressed already in childhood, was realised years later. Being himself a professor at the conservatory, he decided to study again and completed the conducting course under the guidance of professors Nikolai Anosov, Boris Khaikin and Leo Ginsburg. Bezrodny took conducting very seriously and later led several prestigious collectives in Moscow, Leningrad, Berlin and other cities. He was also the chief conductor of the Moscow Chamber Orchestra (1977–1981) and Turku Philharmonic Orchestra (1986–1990). In addition to that, he is known for his numerous articles and essays on music related topics. Beside music, he was an avid photographer and cineast – he always tried to take photos during his concert tours and even won an all-Soviet amateur film contest. 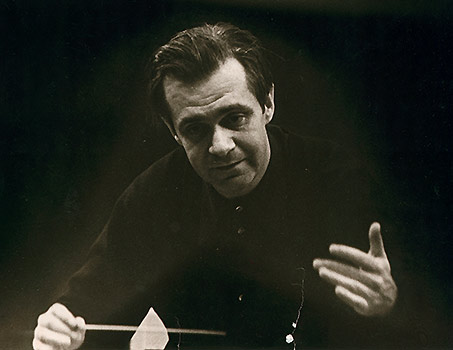 A huge part of maestro’s life was pedagogical activity. In 1955 he began to teach at the Moscow Conservatory, first as an assistant to Professor Rabinovich and later a professor himself. In 1990 he became a professor at the Sibelius Academy in Helsinki. During this period he also taught at the Estonian Academy of Music and Theatre as an honorary doctor. He also gave masterclasses all over the world and participated in the work of juries of international competitions. Bezrodny’s pedagogical work reflects the same broad worldview he had as a musician and a person. He did not focus just on teaching playing techniques but found time to discuss issues of performance, aesthetics and philosophy, sharing the thoughts with his students. One of his main pedagogical principles, following an example of his own teacher Yampolsky, was to notice the individuality and strong sides of each student and to develop them, not giving space for the mindless copying of other musicians. Among the students of Bezrodny are notable violinists Dmitry Sitkovetsky, Pavel Berman, Maxim Fedotov, Mari Tampere-Bezrodny and others.
Bezrodny’s own interpretation can be characterized by philosophical-poetic approach, intellectual depth and richness of nuances and timbre. Critics have called him an inspiring violin poet and an outstanding lyricist. The current albums highlight maestro’s strengths as a violinist. On the one hand he was particularly excellent in performing large forms such as concertos of Bach, Beethoven, Brahms, Sibelius and Saint-Saëns, on the other hand his ability to perform characteristic miniatures holistically and expressively is admirable. Bezrodny had a personal connection with several authors of recorded pieces. In 1953 he met Sibelius at the composer’s home in Finland. The music of Sibelius was especially dear to maestro from an early age and during this meeting he had a chance to play a Serenade for him. According to Bezrodny, this performance had a very strong impression on Sibelius. There was also a contact with legendary Jascha Heifetz whose violin playing fascinated young Bezrodny and who is the author of arrangements for two Gershwin’s pieces, performed by maestro on these CDs. Bezrodny had also personal connection with Igor Stravinsky whose ballet The Firebird inspired him to arrange scenes from it for the violin. The recordings of current albums should be considered especially valuable as in general maestro recorded rarely. He always preferred the situation of a live concert and has stated that the recording was just a mechanical imprint of the sounds.

Bezrodny’s contemporary Kirill Kondrashin (1914–1981) is considered to be one of the most influential conductors of the 20th century. His expressive and vigorous style and profound knowledge of both Western and Russian music repertoire gave him great recognition in the Soviet Union as well as abroad. Raised up in Moscow in a family of orchestral musicians, Kondrashin also chose a musical career and studied at the Moscow Conservatory under Boris Khaykin (1931–1936). After graduation, he worked at the Leningrad State Academic Maly Opera Theatre and in 1943 moved to Moscow Bolshoi Theatre where he brought several new operas to the stage. From the 1940s Kondrashin started to conduct symphony orchestras, in particular Moscow Youth Symphony Orchestra, and since 1956 focused solely on performing symphonic music. In 1947 he was awarded the Stalin Prize. From 1960 to 1975 he was the artistic director of the Moscow Philharmonic Orchestra which under his leadership became one of the most important collectives of the entire country – Kondrashin noticeably improved the quality of the orchestra’s performance as well as extended the repertoire. He focused more on playing contemporary music, including several works by Shostakovich with whom he had a close friendship. Also all Mahler’s symphonies were brought to concert halls. In addition to that maestro had a collaboration with such great artists as Rostropovich, Richter, Gilels, Oistrakh, Kogan and others. New opportunities came with the first international Tchaikovsky competition where Kondrashin conducted for pianist Van Cliburn who won the first prize. Due to this victory Kondrashin became the first Soviet conductor who performed in the USA since the beginning of the Cold War. He also recorded several important works with Van Cliburn, including Tchaikovsky’s Piano Concerto No 1. During a concert tour in the Netherlands in 1978, Kondrashin decided to seek political asylum and stay abroad. After his departure the Soviet Union banned all the previous recordings with him. For the rest of his life in exile the maestro worked as a permanent guest conductor of the Amsterdam Royal Concertgebouw Orchestra and also collaborated with the Vienna Philharmonic. Kondrashin has left a legacy of extensive discography that includes recordings with both renowned soloists and orchestras with whom maestro worked during his life.

The use of the name Moscow Philharmonic Orchestra for the orchestra on the current album requires some explanation. The material of these CDs has been restored from the magnetic tapes from 1949 the faded cover letters of which contain a note Симф.Орк.МГФ. It probably means Симфонический Оркестр Московской Государственной Филармонии or the Moscow State Philharmonic Orchestra. However, if someone visits the website of the orchestra or looks at the history of this collective, it turns out that the orchestra was officially established in 1951, two years after the given recordings were made! The question arises, which orchestra actually plays on these recordings. As one possibility, we can assume that it is a Kondrashin’s project orchestra of young musicians that he brought together for the recording and which two years later became the Moscow Philharmonic Orchestra. Unfortunately, more than seven decades have passed and it is impossible to ask for additional information from the soloist, conductor or orchestral musicians. Therefore, the meaning of the note Симф.Орк.МГФ remains unclear.