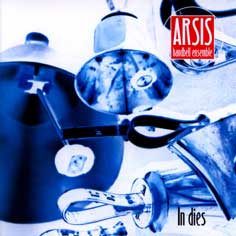 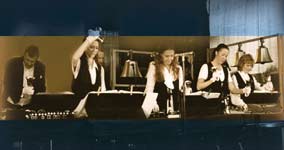 Arsis Handbell Ensemble was grown up from Arsis Chamber Choir – when the conductor of chamber choir, Aivar Mäe heard handbell music in the USA for the first time, it became his fixed idea to bring this wonderful music also to Estonia, thus founding his own ensemble. It was the year 1991. It took two years explanatory work and preparations in both sides of the world and the idea became reality. In 1993 the representatives of the American Guild of Handbell Ringers visited Estonia, and brought the first three octaves of bells as a present to Aivar Mäe and his choir. By now Arsis Handbell Ensemble has one of the most perfect sets in the world that includes bells of seven octaves. All the handbells in the set have been made in the USA, Malmark Incorporation bell factory with whome Arsis has been co-operating already since 1993. The ensemble, having eight members, has toured in different places of the world. One of the most exotic places was the Republic of South Africa where Arsis participated in Eisteddfod festival and was awarded the Grand Prix. Already for four times Arsis has visited the USA where the handbell music is most widely spread.
The ensemble is playing mostly arrangements of classical music but also a lot of original music. They have given out 5 CDs that include original works by Peeter Vähi (Handbell Symphony, Supreme Silence, Planet Cantata) and arrangements of Estonian folk songs by Tõnu Kõrvits (Awake, My Heart!).

Aivar Mäe (b 1960) − the artistic director of Arsis Handbell Ensemble. He acquired his musical education at Tallinn Music High School and Estonian Academy of Music where he studied choral conducting with Prof Ants Sööt. Aivar Mäe has been working with several choirs in Estonia as well as abroad − in Sweden and the USA. He has been the leader of international choir festivals, also running seminars for choral music. In 1992, Aivar Mäe studied in the USA for a year and a half improving his knowledge at the music department of Portland University with Prof Bruce Brown. Since 1999, he has been working as the general manager of Eesti Kontsert, the National Concert Institute of Estonia, and 2004−2006 also as the general manager of Theatre Vanemuine. Since 2009 he holds the position of general manager of Estonian National Opera. Aivar Mäe is a Honorary Member of the Estonian Society for Music Education.

Toomas Vavilov (b 1969) graduated from Estonian Academy of Music, where he studied the clarinet. He also took post-graduate course with Karl Leister (the well-known clarinetist of Karajan-time Berlin Philharmonics) in Germany. Toomas Vavilov is the most appreciated and most well-known clarinetist of Estonia, he has performed in Germany, Austria, Finland, Sweden, Latvia, Poland, Australia, etc. Toomas Vavilov won the annual prize of State Concert Institute Eesti Kontsert, in 2001 the annual prize of Estonian Cultural Endowment. Also, he is a member of NYYD Ensemble. During last eight years Toomas Vavilov also has been active in conducting, in 1996−1998 he studied at the Estonian Academy of Music in the class of Jüri Alperten and Prof Roman Matsov. Since 2004, Toomas Vavilov works as a assistant conductor of Estonian National Symphony Orchestra, and 2006−2007 as the chief conductor of the Theatre Vanemuine.