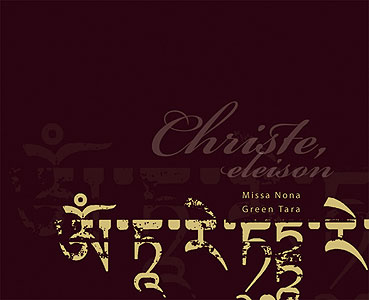 See also a fragment (compilation) of Green Tārā on You Tube

Missa Nona is a concert setting of the traditional mass ordinary text. György Orbán’s writing is harmonically centric and modal.
The piece was commissioned by the Japanese Women’ Choir Angelica and premièred on March 14th, 2000. Missa Nona requires an ensemble with great mental and physical stamina. The piece is characterised by intricate rhythms and modal shifts that should all blend in beautiful and free choral singing.

Avalokiteshvara strived many years to help all beings achieve Enlightenment. When he had delivered millions of beings, he noticed that there were many more suffering. He started crying out of compassion and his tears formed a lake in which a lotus sprung up. When the lotus opened, the goddess Tārā was revealed, saying “Don’t be sad, I will help you.”
Green Tārā sits on the lotus with her right hand in the mudra of supreme generosity, expressing the ability to give all beings what they need. Her left hand that is raised above her heart is in the refuge-granting mudra: her thumb and index finger are pressed together, symbolising the unity of method and wisdom. The remaining three fingers are extended upward, symbolising Buddha, dharma and sangha. She holds a blue lotus flower in both hands. Both flowers have three blossoms, showing that Tārā, the representation of enlightened action, is the mother of past, present and future Buddhas. Green Tārā has royal silk clothes, rainbow-coloured stockings, a short white blouse and jewellery. The latter symbolise Tārā’s perfect generosity and her high morals. The tiara that she wears on her black hair is adorned with jewels. There is a red ruby in the middle, the symbol of Amitabha, the mentor of Tārā and the head of a Buddhist school. Tara sits on the throne of lotus with her left leg bent up against her body, symbolising the renunciation of earthly pleasures and her right leg extended, showing her readiness to attend to those who call upon her. Her eyes are filled with compassion towards all beings. Her emerald green colour is connected with change and the element of air, expressing her ability to act quickly in order to help all beings. Modern Buddhist folklore is full of stories in which Tārā has snatched people from the jaws of death or has helped people to get away from robbers. Tārā protects from eight fears that have internal and external aspects, such as lions = pride, thieves = delusions, floods = desire and attachment, fire = hatred and anger, elephants = ignorance, snakes = jealousy, evil spirits and demons = doubts and bondage = avarice.

To the assembly of the Bhagawati deities,
the embodiment of the Triple Gem,
I and others take refuge until Enlightenment is achieved.
In order to protect all sentient beings from fears of sansara
I cultivate the two types of bodhicitta.

All the phenomena of grasping and fixation dissolve into emptiness.
The vast protections manifest from that emptiness.
At the center is a lotus and moon disk.
On that is a green TAM, the nature of ones awareness.
Light radiates and purifies the obscuration of all sentient beings.
It then makes offering to all the Buddhas and returns.
I become Tārā with one face and two arms in giving mudra,
holding a green lotus, two legs in the half lotus posture,
with a dignified youthful form, blue-green in colour,
wearing silken robes and jewel ornaments,
radiating light, in the Sambhogakaya form.
Light manifests to all directions from three syllables
in the three places bringing all the Buddha’s wisdom,
compassion and activities, which dissolve into me.
I become the embodiment of the Sugatas of three times.

On a moon disk at the heart level is a TAM syllable surrounded by the mantra,
radiating light to all the Buddhas bringing back the blessings which dissolve into me,
revealing the inseparability of appearance and emptiness,
the nature of the infinite qualities of all Buddhas.
Again from the mantra,
infinite light radiates which transforms all outer phenomena into Dewachen,
all beings into Tārā’s forms, all reciting the secret mantra.

All outer and inner phenomena melt into light and dissolve into me.
I also melt into the nonobjectified unfabricated Dharmadhatu,
the ultimate clear light Dharmakaya, the great bliss.
All is in the Mahamudra state – ordinary mind.

By this virtue and virtue accumulated in sansara and nirvana,
and the innate nature,
may all the mother sentient beings countless as infinite space attain the form of Noble Tārā,
free from rejection and acceptance,
the state of great wisdom which is liberated from the five poisons.

Dorje Chang, Tilopa, Naropa, Marpa, Milarepa, Dharma Lord Gampopa,
Phagmodrupa and Lord Drikungpa,
please bestow upon us the most auspicious blessing of all the Kagyu Lamas.
By this virtue may I achieve the all knowing state and may all who travel on the waves of birth,
old age, sickness and death cross the ocean of sansara by defeating all enemies-confusion (the cause of suffering).
Bodhicitta, the excellent and precious mind.
Where it is unborn, may it arise.
Where it is born, may it not decline, but ever increase, higher and higher.

By the virtues collected in the three times by myself and all beings in sansara and nirvana,
and the innate root of virtue,
may I and all sentient beings quickly attain unsurpassed, perfect, complete, precious Enlightenment.

May the teaching of the Great Drikungpa Ratna Shri,
who is omniscient, Lord of the Dharma, Master of interdependence,
continue and increase, trough study, practice,
contemplation and meditation until the end of sansara.
Sarva Mangalam.

In the unborn Dharmathatu abides the Reverend Mother, the deity Tārā.
She bestows happiness on all sentient beings.
I request to protect me from all fears.
Trough not understanding oneself as Dharmakaya, one’s mind is overpowered by the kleshas.
Our mother, sentient beings, wander in sansara.
Please protect them, Deity Mother.
If the meaning of Dharma is not born in one’s heart,
one just follows the words of conventional meaning.

Tallinn Children’s Choir was founded in 1951 by Heino Kaljuste. In 1969 the choir was named Ellerhein. A year later, Tiia-Ester Loitme began working with the choir as an assistant conductor and since 1989 she has been the choir’s chief conductor. The choir’s current assistant conductor and music theory teacher is Ülle Sander, the accompanist is Katrin Kuldjärv and the vocal coach is Eha Pärg.
Ellerhein has received wide international acclaim for its beautiful sound and is the winner of many choir competitions. The choir has received the 1st prize in Celje (Slovenia, 1977), Powell River (Canada, 1988), Giessen (Germany, 1990 and 1997), Tolosa (Spain, 1990 and 1997), Nantes (France, 1993), Tallinn (Estonia, 1994, 2000, 2001, 2003, 2005, 2007 and 2008), Arezzo (Italy, 1994), Ankara (Turkey, 2005), Wuppertal (Germany, 2007), as well as the European Grand Prix in Tolosa (Spain, 1997), Takarazuka (Japan, 1995), Tolosa (Spain, 1997). In 2007 the choir won the Estonian Radio prize “The Best Estonian Choir” and in 2008 they won the Grand Prix at the international choir competition Kathaumixw in Canada. At the same competition they also received the 2nd prize in folk & cultural traditions category. 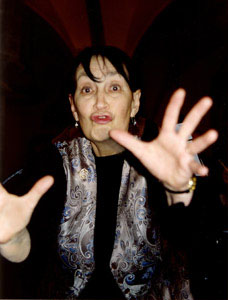 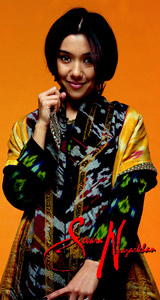 Sevara Nazarkhan is a talented Uzbek singer, songwriter and musician, who possesses a repertoire of beautiful songs based on the sufi tradition and on the rich national Uzbek tradition. Sevara, having a natural enchanting voice, began her career as a singer in 1998 when she started singing at the all female doutar quartet. Her breakthrough came in 2000 when she took part in the Festival WOMAD (World of Music, Art and Dance) in Redding, England. She was signed up by the recording company Real World.
In 2003 Sevara Nazarkhan was nominated the top singer in the Asia-Pacific Region – and won the title in the contest of BBC Radio 3 World Music Awards. A year later, she earned the title “Musician of the Year 2004” in the category of World Music by the BBC. In 2005, she debuted as a producer on the Calabash-released, BBC3-award-winning Gozal Dema.

Other recordings with Ellerhein: Tormis. Nüüd ep on ilus elada, The Hand Of God, Ellerhein. Estonian Choral Music
Other recordings of Peeter Vähi: Maria Magdalena, Hommage à brillance de Lune, In the Mystical Land of Kaydara, Supreme Silence, A Chant Of Bamboo, To His Highness Salvador D, 2000 Years After The Birth Of Christ, The Path To The Heart Of Asia, Tamula Fire Collage, Sounds Of The Silver Moon