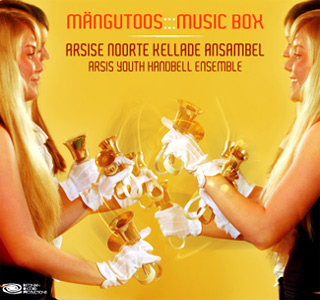 An exciting performing of classical hits and Christmas tunes by Arsis Youth Handbell Ensemble. The festive bronze sound of the bells gives a new dimension to the well-known pieces.

Bells or chimes as percussion instruments were recognised already in ancient times. The roots of these musical instruments date back to the 13-14th centuries when it was common that differently tuned church bells called people to the service playing beautiful melodies. The first small copies from big church bells were made in England and that is why these handbells are known as English handbells.
Arsis Handbell Ensemble was developed from the chamber choir Arsis in 1993. Arsis Youth Handbell Ensemble has its roots in the Arsis Handbell School which was founded in 1999. In 2003, the first students graduated from the school, and the same year, the current youth handbell ensemble was founded. The 14-member group was chosen through a contest from among 45 participants. The conductor of the ensemble is Aivar Mäe, the founder of the ArsisHandbell Ensemble and the Handbell School.

Aivar Mäe (b 1960) – the artistic director of Handbell Ensemble Arsis. He acquired his musical education at Tallinn Music High School and Estonian Academy of Music where he studied choral conducting with Prof Ants Sööt. In his youth Aivar Mäe was the vocal soloist of the pop-rock group Vitamiin. Later he has been working with several choirs in Estonia as well as abroad – in Sweden and the USA. He has been the leader of international choir festivals, also running seminars for choral music. In 1992, Aivar Mäe studied in the USA for a year and a half improving his knowledge at the music department of Portland University with Prof Bruce Brown. 1999–2009 he has been working as the general manager of Eesti Kontsert, the National Concert Institute of Estonia, 2004–06 the general manager of Vanemuine Theatre. Since 2009 he holds the position of general manager of Estonian National Opera. Aivar Mäe is a Honorary Member of the Estonian Society for Music Education.