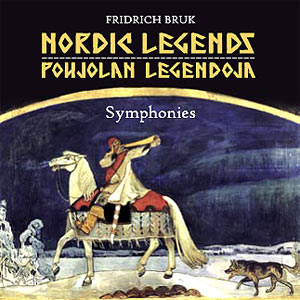 Double-CD with recordings of symphonies by Jewish-Russian-Finnish composer Fridrich Bruk. Inspired by the mystical paintings of Axel Gallen-Kallela.

Fridrich Bruk was born in Kharkov, the Ukraine on Sep 18th, 1937 as a son of an engineer and a famous pianist. In 1956 he graduated with a silver medal from Kharkov Music College of the Kharkov Conservatory. The same year Bruk continued his education in Prof Voloshinov’s composition class at Leningrad Rimsky-Korsakov State Conservatory. In 1961 he graduated as composer from the class of Prof Arapov. During the years 1961–64 Fridrich Bruk worked in Petroskoi, Karelia where he was also awarded membership in the Society of the Soviet composers. In 1964 Bruk returned to Leningrad where he continued his creative work composing music also for theater and movies as well as several popular songs. He headed the department of music in Lennauchfilm studio.
Since 1974 Fridrich Bruk has resides in Finland where he has composed numerous symphonic works, chamber and choral music as well as popular songs. In 1988 he was awarded the Cross of Merit of the Order of the Lion of Finland. In 1998 he received the artists’ supplementary pension of the Finnish State.
Fridrich Bruk is a member of the Society of the Finnish Composers, the Society of Russian Composers, the Guild of Light Music Composers and Authors ELVIS.

Ever since then the composer has taken a profound interest in Vepsan, Karelian and Finnish folk art and musical folklore as well as in the epos Kalevala. In 1980, already living in Finland, Fridrich Bruk composed Variations for the piano on the theme of a Karelian folk song Strawberry which is frequently performed at concerts. The year 1985 sees the birth of Concert Variations for cello and piano on an ancient theme from Kalevala – a work which became famous after its performance at Fridrich Bruk’s concert on Finnish TV in 1986.
In 2001 Symphony No 4 Carelia was composed and later, in 2003 it was recorded by the Estonian National Symphony Orchestra conducted by Maestro Paul Mägi. In this work the composer widely uses elements of Karelian folklore uniting the intonational-instrumental development of the symphony with a Karelian poem about Väinämöinen creating Kantele. In the symphony’s finale the Karelian intonation in a natural way melts together with a Kalevalan ode Aunuksen Aamu (‘Daybreak Over Aunus’) by Eino Leino.

Symphony No 7 Kalevala By Artist Axel Gallen-Kallela (2006) was recorded by Liepaja Symphony Orchestra (Latvia) and an Estonian conductor Andres Mustonen. Being inspired by Kalevala and Gallen-Kallela’s (1865–1931) impressive paintings on that theme the composer once again returns to fenno-ugric intonations and their variations in the development of the symphony’s musical characters, gradually uniting the thematic canvas with the principal idea – a melody of happiness which is achieved by hard work and great sacrifice.
Movement I The Aino Myth: A beautiful forest nymph Aino is intending to take her own life. In the forest she meets wise old Väinämöinen who falls passionately in love with her. But the beauty refuses Väinämöinen, walks into the water and becomes a mermaid.
Movement II Kullervo Cursing: An orphan shepherd boy Kullervo lives in slavery at his uncle Lemminkäinen’s place who has killed the boy’s parents. The wife of Lemminkäinen wants to torment Kullervo and hides a stone in the orphan’s bread loaf. Upon Kullervo cutting the bread with a knife which is his only memorabilia of his deceased parents, it hits the stone, thus breaking the blade. The anger flaming up in the boy makes him stand up and find his dignity. He swears to revenge his enslaver and becomes a brave soldier. However, Kullervo grows tired of waging war and decides to commit suicide.
Movement III Robbery Of The Sampo: An evil woman Louhi has stolen Sampo, creation of Kalevala people’s hard labour. She keeps the great treasure in a secret safe place. A group of brave men, however, decide to go and bring Sampo back and after a severe battle they get it from the usurpers and return it to the Kalevala people for ever.

Symphony No 1 for orchestra and trombone (1998) was first released on a CD of Fridrich Bruk’s works in 2003 together with Symphony No 2. The CD was warmly received by the audience and the new release of the afore-mentioned symphonies on the Nordic Legends CD is a telling sign of their popularity. Symphony No 1 for orchestra and trombone is dedicated to commemorate events of the Civil War in Finland in 1918.
The composer, living next to, in Finland well-known Pyynikki Park of Tampere, has heard lots of stories and read numerous books about the cruel and dramatic battles that took place in that fairy-tale-like nature of placid Nordic beauty during the Civil War. That war, the split of people then and all the events of that time, however, taught the Finnish people patience, tolerance, mutual understanding and in the long run gave their contribution to the development of democracy.
The tense and gloomy beginning of the symphony gets even darker, culminating in gunshots and execution of the conquered, all that taking place in the naturally beautiful spot of Pyynikki Park. In the 3rd movement the sounds of park nature and greenery take the upper hand, though, thus giving an impression of spiritual peace and joy created by those who take care that the Park of Pyynikki would flourish and blossom for ever.

Symphony No 2 for orchestra and piano (1999) is not based on a specific thematic script, however, already in the 1st movement Sostenuto e tenebroso, while listening to the dramatic development of the intertwining themes one enters a world of tense collisions that lead to nervous outbursts of the whole orchestra. It is quite obvious that those are the memories of the composer’s childhood during the years of war, of losing his mother and of the everyday world collapsing around him.
Already in the 2nd movement Vivo this dramaticism is changing into the mood of the happy time of youth with its jokes, laughs, dreams and first love. Here the composer introduces a piano solo, the role of which is gradually growing, almost giving an impression that the work in question is more a piano concerto than a symphony. The pianist displays his virtuosity creating an atmosphere where the orchestra nearly surrenders and stays in the background.
In the 3rd movement, though, despite the piano’s continuing cascades the orchestra fights back its typical-to-symphony position. In the end the orchestra and piano find a balance accepting their roles in the symphony and one can enjoy softer and lyrical melodies of lighter colour.
The composer, underlining the youthful moods in the symphony, with great skill uses also sharper rhythms characteristic of jazz.

Symphony No 6 Birds Of Passage for orchestra, French horn and tuba (2006) is based on the themes of 3 poems by a Finnish poet Viljo Kajava (1909–98). The symphony has been dedicated to a well-known expert of music Helena Hiilivirta.
The 1st movement Wolf is an allegory of the growth of the Finnish nature from a child to a experienced leader. Though in the course of events the situation makes him savage himself in order to give way to his stronger subordinate for taking his place.
The 2nd movement Sound Of The Shore is philosophic contemplation of a poet beaten by life about the latter’s fragility and futility of the search for a peaceful lagoon.
The 3rd movement is called Birds Of Passage. From high in the sky the Earth is seen – with its beautiful nature and endless vastness… and the dead body of a hanged poet and a child who just for fun kills an innocent bird with a catapult and a work horse writhing in labour and a satiated predatory animal tearing apart a gracious deer. Why? The poet does not give answers to the questions asked by him. Hence at the end of the symphony the uniting of sounds of nature with music offers the contemporary listener a possible explanation.