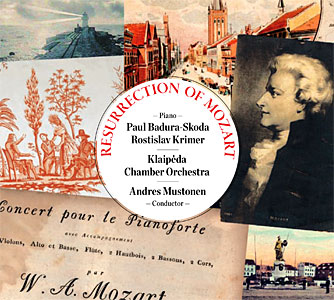 An active musical life, a historical and acoustically excellent concert hall as well as several highly acclaimed international festivals have made Klaipėda one of the most important musical centres in Lithuania. In Oct 2013, in order to give a concert and record the current CD with the Klaipėda Chamber Orchestra an international set of musicians gathered here − a legendary Austrian pianist Paul Badura-Skoda, a Belarusian pianist Rostislav Krimer, the wind group of Liepāja Symphony Amber Sound Orchestra and an Estonian conductor Andres Mustonen. 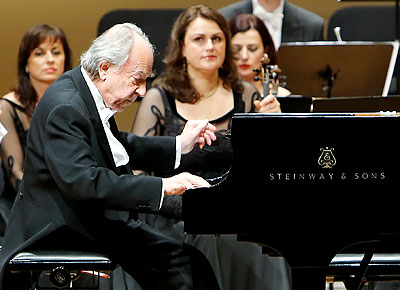 Paul Badura-Skoda, a student of Edwin Fisher, a valued co-operation partner of Wilhelm Furtwängler and Herbert von Karajan, after more than half a century at the top of the music world, is today still the same energetic and radiant person on the concert stage as well as in private life.
“He is fantastic − a true grand master of piano performance. I remember that the single piano music recording I used to listen to during my time at the conservatoire was Paul Badura-Skoda with Dagmar Bella − in 1953 together with Furtwängler they performed the same concerto that we are going to perform in Klaipėda. Let us see how it goes”, Uldis Lipskis, the director of Liepaja Symphony Orchestra expresses his admiration.
Despite his 86 years of age, Badura-Skoda’s performance schedule is still incredibly tight and far-planned. The current concert is soon to be followed by performances in the Amsterdam Muziekgebouw, the Berlin Philharmonic Hall, Vienna Musikverein as well as in Paris, London, Shanghai, Taipei et al. The dense schedule also accommodates master classes.
A Chicago music journalist Bruce Duffie interviewed Paul Badura-Skoda: “You have a special affinity for Mozart. What is about Mozart that brings such a special joy to you?” The Great Master replied: “I belive it’s one thing that brings special joy to everyone who loves music. First of all Mozart writes the most perfect, the most beautiful music; music which is perhaps at the turning point of history, where it was possible to use harmony and really make it sound like harmony, and yet not to make it too primitive. With the greatest economy of notes, of ornaments, of virtuosity, the greatest effects are reached. It means every note is charged with meaning and very often with emotion.”
If a musician dedicates most of his life to the works of one composer, then in a way he identifies himself with this music. The producer of the current recording Peeter Vähi said: “By his sole presence Badura-Skoda managed to create a peculiar atmosphere at the concert hall. From the first piano sounds it felt as if Mozart had been resurrected and was hovering above the hall in the small East-Prussian town of Memel*”.
Together with his wife, musicologist Eva Badura-Skoda, they have written a book Interpreting Mozart: The Performance of His Piano Pieces and Other Compositions. It was first published in Vienna, 1957 and it expresses an original idea at that time that Mozart’s music should be performed on the composer’s contemporary instruments. Ever since then the idea gained popularity among musicians in the world giving rise to the trend of performing Early Music on the historical instruments. The pianist himself prefers original instruments as well.
However, the sound of Mozart-time Hammerklavier is considerably lower than that of today’s instruments and thus the former are not always suitable for performing piano concertos with orchestras in big halls. On the present CD the piano concertos have been performed on modern instruments. Both soloists play the pianos made by Steinway & Sons.

* Memel − the former name of Klaipėda 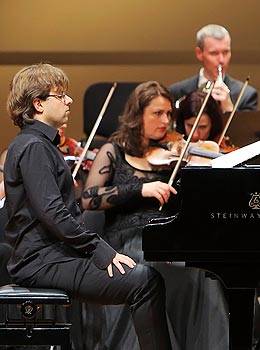 Gifted with unique musicality, Rostislav Krimer is one of the most notable pianists of his generation.
Born in Brest, 1980, he commenced his pianist career at the early age of 5. After graduating from the Music High School by the Belarusian State Academy of Music, in 1997, Krimer continued his studies at Sibelius Academy in Helsinki and thereafter with Vassily Lobanov at Musikhochschule Cologne. He took his Postgraduate Diploma with Prof Christopher Elton at the Royal Academy of Music in London, and was awarded the Diploma of Outstanding Final Recital.
He has been awarded prestigious prizes at several international competitions, among others the 3rd Prize at Chopin Youth Competition in Poland, 1996, and the 1st Prize at Rubinstein Competition in Paris, 1999. In 2004, he won the Prize for the best performance of Chopin at Unisa International Piano Competition in Pretoria.
Year 2006 witnessed his critically acclaimed debut at the Cadogan Hall in London. Rostislav Krimer has given piano recitals in more then 30 countries in Europe, Asia, Africa and the USA. Prestigious halls like the Berlin Philharmonic, Tchaikovsky Grand Hall in Moscow, Beethovenhalle in Bonn, Schloss Mirabell in Salzburg, Salle Cortot in Paris, Teatro Communale in Florence, Villa Medici in Rome, Cadogan Hall, Queen Elisabeth Hall as well as St Martin-in-the-Fields in London have hosted his performances.
His stage partners include Yuri Bashmet, Gidon Kremer, Maxim Vengerov, Paul Badura-Skoda, Viktor Tretyakov, Sergey Krylov, Mario Brunello. As soloist, Krimer has performed with the most notable orchestras and ensembles like Kremerata Baltica, Moscow Soloists, Mahler Chamber Orchestra, Johannesburg Philharmonic Orchestra, Lithuanian Chamber Orchestra, State Symphony Orchestra New Russia.
Rostislav Krimer is the Founder and Artistic Director of the Yuri Bashmet International Music Festival, which hosts the best artists of our time on concert stages of Belarus, Russia and Germany.
In 2012, a CD of Sofia Gubaidulina’s The Canticle of the Sun, performed by Gidon Kremer, Kremerata Baltica, Rostislav Krimer, Nicolas Altstaedt and chamber choir Kamēr was released by ECM. 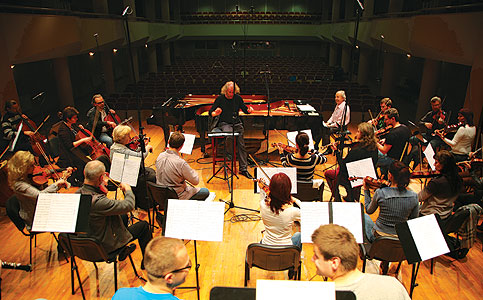 The Klaipėda Chamber Orchestra (KCO) is one of Lithuania’s youngest and most vibrant professional chamber ensembles. Since its foundation in 1992, the group of 19 string players has striven consistently towards enrichment of the local musical scene with new traditions of orchestral music. The Orchestra found permanent home and administrative support in the Klaipėda Concert Hall, a venue offering the year-round calendar of events and three annual festivals, where the Orchestra makes regular appearances as its resident ensemble. In programming events, it aims to stimulate and enlighten the audiences through dynamic performances, featuring a broad cross-section of musical styles and genres across the epochs.
The KCO’s unique artistic style is primarily distinguished for the refined sense of (mostly self-conducted) ensemble, which was achieved through long-term commitment of its individual members. The Orchestra’s professional growth and sound quality have always been in the hands of talented string players, starting with its founding member and first artistic director, present principal violist, Liuda Kuraitienė. A more decisive turn to the new level of excellence and expansion of the repertoire was masterminded by cellist Mindaugas Bačkus who took over as the Orchestra’s new artistic director in 2009. An experienced orchestral, ensemble musician and adventurous soloist himself, he sees an orchestra as “a way of life, a philosophy of one’s relationship with music, a sense of artistic community”. His farsighted approach soon yielded far-reaching results: in the past few years the Orchestra has gone through a series of master classes with Baroque music experts and started exploring early music repertoire; at the other end of classical music’s timeline it has introduced no less challenging programs, with a wide selection of 20th−21st century works and with a firm focus on Lithuanian contemporary music.
The KCO also continues to reach out to the young audiences by appearing as The Orchestra of Playful Music in the educational series of the Klaipėda Concert Hall where it has showcased the best young talents in the country, shared the stage with the fictional characters of stories for kids in semi-theatrical productions, and last but not least, accompanied the world-famous “pianist” cat Nora in the world première of the original CATcerto composed and conducted by Mindaugas Piečaitis.
Over the two decades the KCO has become a prime exponent of cultural life in Klaipėda, currently setting its sights on national and international engagements. To date, it has performed at major music festivals and venues in Lithuania, as well as on international tours in Germany, Poland, the Ukraine, Latvia and elsewhere. Both at home and on tour it has worked alongside a distinguished array of conductors and soloists, including Saulius Sondeckis, Robertas Šervenikas, Donatas Katkus, Vytautas Lukočius, Modestas Pitrėnas, Martynas Staškus, Kaspar Zehnder, Aleksandar Markovič, Dante Anzolini, Mark Kadin, Reinhard Goebel, Alexander Paley, David Geringas, Mike Svoboda, Petras Geniušas, Andrius Žlabys, and Mūza Rubackytė. Some of these performances have been captured on disc The Perfect Harmony of Sounds released in 2009. 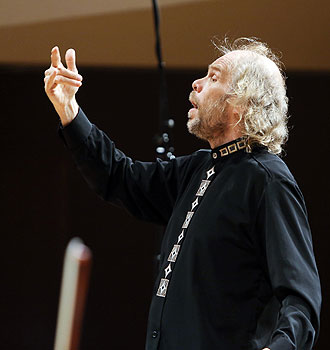 An expert in Early Music and Artistic Director of Early Music Consort Hortus Musicus Andres Mustonen has during the last decades gained international fame as a conductor with extra charisma and energy whose profound knowledge and feeling of music allow him to conduct and perform works of different genre and period, from early Christian monophony to Classical and Romantic oratorios, from Armenian and Arab mughams to Indian ragas and Israeli temple songs. Curiosity and interest in different cultures with an ability to find far-reaching interrelations have brought him together with musicians of various nationalities and backgrounds. His bursting energy infects and inspires the fellow artists as well as audience. The musical result never leaves anyone indifferent. He has been searching alternatives to academic music in jazz, rock and folk.
Andres Mustonen has conducted Sinfonietta Rīga, the Tchaikovsky Symphony Orchestra, Moscow State Academic Symphony Orchestra, Moscow and St Petersburg philharmonic symphony orchestras, Lithuanian, Estonian and Latvian national symphony orchestras, Helsinki City Orchestra, Finnish Radio Orchestra, Ostrobothnian Chamber Orchestra, State Academic Chamber Orchestra of Russia as well as numerous orhcestras in Italy, Germany, Israel, Poland, Turkey, Belarus, Armenia, Georgia, Brazil, Sweden, Mexico, Belgium et al. Since 2012, Mustonen is the Artistic Director and Chief Conductor of Glasperlenspiel Sinfonietta, though he was conducting various successful concert tours with the orchestra already before that.
The present concert was the first meeting of Paul Badura-Skoda and Andres Mustonen. However, Mustonen has always used Badura-Skoda’s editions of Mozart’s scores.

Distribution in Estonia by Easy-Living Music, in the USA by Naxos USA, worldwide by Note 1 Music and amazon.com.

Other recordings of Andres Mustonen: Ave…, 2000 Years After The Birth Of Christ, Nordic Legends, To His Highness Salvador D, A Wandering Minstrel