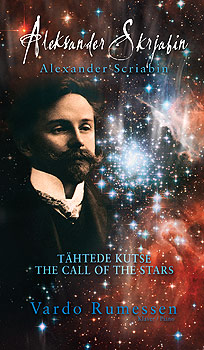 ALEXANDER SCRIABIN
THE CALL OF THE STARS
Vardo Rumessen, piano

So much do I love my star that if I shall no longer look at it, if it will not shine upon my life, and if I shall not strive towards it, then thought will die, and everything along with it. Better I should disappear within a wild outburst, but for thought to remain and triumph.

Listening to this music I hear distinct connections with the scientific properties connected to this world. Light, darkness, heat, frost, oceanic rhythms and their pulsating effects, together with their yearning – in unison they create a vacillating effect of our natural earthly elements of fire and air.

Special thanks to Estonian Public Broadcasting and Mr Margus Allikmaa