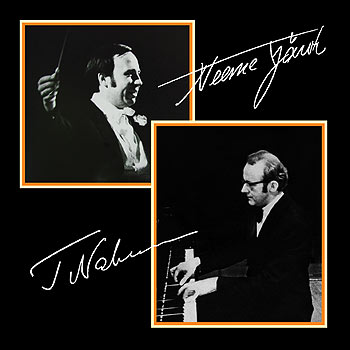 Toivo Nahkur (1947) was born in a family of teachers in Lääne-Virumaa, Estonia and got his first piano lessons from his father.
In spring 1963 Toivo Nahkur continued his studies in Prof Bruno Lukk’s (1909−1991) piano class at the newly-opened Tallinn High School of Music. He took a parallel course in composition with Harri Otsa. “I feel awfully sorry that my composing later came to a standstill”, Toivo Nahkur says. “It contributed a lot to the development of thinking, for example in the ability to read a musical piece from the score in my mind’s eye (without the piano) and be able to do it as coherently as playing it on the piano. Later on, music was always ready in me before coming to the fingers − a score and playing it through with my eyes, so to speak, was enough. This ability has greatly helped me in my teaching work. I no longer had problems with musical imagination. I learnt to improvise and mentally find musical figures on the piano. I learnt to think in the linear way, although I sometimes also composed harmonically.”
In 1972 Toivo Nahkur graduated from Prof Bruno Lukk’s piano class at the Tallinn State Conservatoire. From 1974 until 1977, he took a post-graduate course in Moscow, supervised by Prof Maria Grinberg (1908−1978) at the Gnessins’ Music Pedagogical Institute. From 1972 he was a lecturer at the Estonian Academy of Music, from 1974 also at Tallinn High School of Music.
By now, Toivo Nahkur has been teaching piano at the Academy for 34 years, and has had students at the High School of Music for just as long. Over 70 students altogether have graduated from his class. He has lectured on the history of pianism for half of this period. In the course of twenty-five years from 1972 to 1998 Toivo Nahkur gave over 300 concerts in Estonia and other parts of the former Soviet Union, performing also in Finland, Austria, Germany, Spain, France and elsewhere.
Ever since he stopped performing (his last performance was in Finland in 1998), his main activity has been teaching. His students have received numerous awards at international competitions, their debut concerts have taken place in New York Carnegie Hall, in Great Hall of the Moscow Conservatory, Concertgebouw in Amsterdam, etc. Toivo Nahkur’s son Hando Nahkur is also an outstanding pianist.

Neeme Järvi (1937), one of the most outstanding conductors of the world, is an Estonian-born. He studied music first in Tallinn, and later in Leningrad with Yevgeni Mravinsky. In his early career he held posts of Chief Conductor of the Estonian National Symphony Orchestra and the Estonian National Opera in Tallinn. In 1971 he won first prize in the International Conductors Competition at the Accademia Nazionale di Santa Cecilia in Rome. In 1980 he migrated to the United States.
In 1982 Neeme Järvi became the Principal Conductor of the Gothenburg Symphony Orchestra retaining this post for 22 years. Under his leadership the reputation and the size of the orchestra greatly increased. He held his post in Gothenburg until 2004 after which he became the Principal Conductor Emeritus of the orchestra.
Concurrently, he was also Principal Conductor of the Royal Scottish National Orchestra from 1984 to 1988. In 2006 the orchestra named him their Conductor Laureate.
In USA, Järvi became Music Director of the Detroit Symphony Orchestra in 1990. He served until 2005 and is now its Music Director Emeritus.
In 2005 he became Music Director of the New Jersey Symphony Orchestra working with it for several seasons. In March 2009, the NJSO named him their Conductor Laureate.
In Sep 2005, Järvi took up the post of Chief Conductor of the Residentie Orchestra of the Hague for 3 years. Further the orchestra extended his contract twice, at present also through the season 2010−2013.
In September 2010 the Orchestre de la Suisse Romande named Neeme Järvi as its 9th Artistic and Musical Director, as of 2012, with an initial contract of 3 years.
Neeme Järvi’s discography includes over 400 recordings for labels such as BIS, Chandos, and Deutsche Grammophon. He is best known for his interpretations of Romantic and the 20th century music and also the works by great Estonian composers Eduard Tubin and Arvo Pärt (whose Credo he premiered in 1968). Well known are also his interpretations of Sibelius with the Gothenburg Symphony Orchestra, and his recordings of  several works in their complete form − including Grieg’s orchestral music and the complete incidental music of Peer Gynt, as well as Tchaikovsky’s complete incidental music for Aleksandr Ostrovsky’s play The Snow Maiden, and all 3 Rimski-Korsakov’s symphonies and orchestral suites.
Neeme Järvi has 2 sons (conductors Kristjan Järvi and Paavo Järvi) and a daughter (flautist Maarika Järvi).