Released on Sep 25th, 2013 during the festival Verdissimo! The album includes a bonus CD specially edited and mastered for car audio systems.

The current compilation is a musical homage to three important events taking place in 2013. The whole world celebrates the 200th anniversary of Giuseppe Verdi and Richard Wagner, and the Estonians pay tribute to the 100th anniversary of Estonia Theatre and Concert House. On May 8th, 2013 a magnificent concert of Verdi’s and Wagner’s opera choruses and overtures took place in the Estonia Concert Hall. The recording of the concert makes up the current records. The current album is not the usual double-CD as both discs contain exactly the same music. Why? Probably all of us have noticed that while listening to the music in a car, our hand automatically reaches out to adjust the volume. At times, the music is too loud, at times, barely audible through the surrounding noise, at times, the bass frequencies are distorted, because mostly, the recording of classical music is meant to be enjoyed on a high quality player in relative silence. Estonian Record Productions has worked out a special method of sound editing in order to guarantee optimal listening effect of the current recording also in spaces with high background noise level. We have also taken into consideration that not all car sound systems are of top-quality, so the additional disc can equally well be played on standard equipment. To our knowledge, this is the first car-CD produced in Estonia and one of the very few in the world. 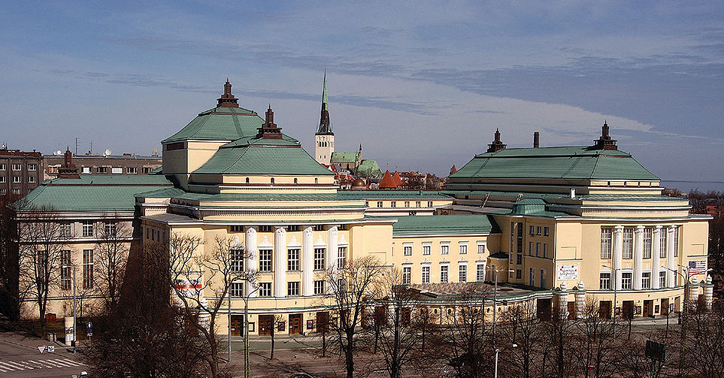 The Estonian National Opera, established in the year 1906, is a historic organisation with vital traditions and manifold functions.
The EsNO’s season, lasting 10 months from September until June, contains a varied repertoire of opera, ballet, operetta, musicals and children’ pieces. Around 250 performances of up to 30 different works are presented annually, including the cream of classical opera and operetta as well as contemporary masterpieces. On the top of that, the best works of Estonian origin are also shown on the stage!
The Estonian National Opera is the home of the symphony orchestra, the opera chorus and the ballet. The orchestra was founded in 1907 and it now employs almost a 100 musicians. In addition to its theatre assignments, the orchestra regularly performs symphonic works and records world classics as well as the best of Estonian music. The 54-strong opera chorus, besides participating in stage productions, consistently gives concerts on its own as well. The EsNO employs as many as 25−30 soloists. As a compliment to that, it welcomes guest singers on a regular basis. The EsNO ballet, existing within the framework of the opera company and employing approximately 60 dancers, is the country’s largest ballet troupe. Young choreographers are constantly enriching its repertoire of standard favourites with contemporary pieces and occasional avant-garde projects. In order to stay open to new ideas and fresh approaches, The EsNO always makes space and time in its working schedule for joint projects of multifarious nature, and for individual guest artists. For the latter to bring their unique experience onto our stage; for the Estonian audience, to partake of a different artistic vision.
Symbolically speaking, the EsNO’s location in the heart of Estonia’s capital city, Tallinn, is a reflection of the company’s artistic position − at the centre of Estonian culture.