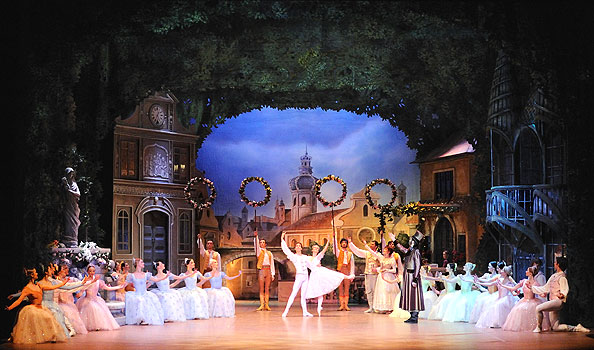 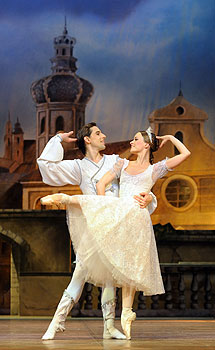 A village square in Galicia. This ballet is set in a village in Galicia, in central Europe. Swanilda, the heroine of the story, is the daughter of the Burgomaster, or Mayor, of Galicia. She is betrothed to Franz, a handsome young villager, and on the eve of their wedding day she has reason to doubt the seriousness of his affections when she finds him admiring a beautiful girl sitting on the balcony of a nearby house. Dr Coppelius, the owner of this house, is a strange and sinister toymaker who dreams of creating a doll with a soul. The appearance of the unknown girl causes much interest and speculation, particularly as she ignores Swanilda’s friendly greetings.
The Burgomaster leads the peasants in from the fields and reminds them that the following day they will be celebrating not only the harvest festival, but also his daughter’s marriage. When he sees that Swanilda and Franz have quarrelled, he produces an ear of corn and suggests that they put their love to the test using the old legend − if it rattles they will be married. The corn remains silent. After a few tears, however, Swanilda is dancing with her friends again and by evening the lovers have made up and tenderly kiss goodnight.
On his way to the inn, Coppelius is stopped by some rowdy youths. After a brief skirmish, they disappear and he continues his way, unaware he has dropped his house key. Having observed the incident, Swanilda and her friend decide to enter the strange house to find out more about the mysterious girl that they have seen. On his way home from the inn, Coppelius discovers he has no keys and notices his front door is open. Agitated, he goes into the house.

Coppelius’ workshop. Swanilda and her friends find the workshop filled with Coppelius’ automatons and are amused to discover that the aloof stranger, Coppélia, is also a doll. They are soon interrupted by Coppelius who drives the intruders away, whilst Swanilda hides in an alcove.
Franz then enters the workshop, as he’s also keen to meet Coppélia. Coppelius seizes him and attempts to transfer his life-force to the doll. Not realising that Swanilda has taken the doll’s place, Coppelius is overjoyed when the doll begins to move, but his excitement soon turns to dismay when Franz is revived and Swanilda reveals her true identity. Franz begs Swanilda’s forgiveness and the pair run out into the square, leaving the disillusioned Coppelius alone.

The village square. The villagers assemble for the double celebration of the harvest festival and Swanilda and Franz’s wedding feast. The couple are entertained by dancers representing faith, hope and love.
Still angry from the previous night’s activities, Coppelius storms out of his house threatening revenge, but the Burgomaster pacifies him with gifts of money and wine. The story ends happily and the festivities continue long into the night.

The roots of the Estonian National Opera go back to 1865, when the song and drama society Estonia was founded. In 1906, the society became the basis for a professional theatre. The ballet troupe began regular work in 1926, but the first full-length ballet, Coppélia by Delibes was performed in 1922 already. Since 1998, the theatre is officially named the Estonian National Opera. Estonian National Ballet that operates under Estonian National Opera was founded in 2010, employing approximately 60 dancers, being the country’s largest ballet company. Young choreographers are constantly enriching its repertoire of standard favourites with contemporary pieces and occasional avant-garde projects. The Artistic Director and Chief Conductor is Vello Pähn, the Artistic Director of the Estonian National Ballet is Thomas Edur and the General Manager is Aivar Mäe.
The theatre’s repertoire includes classical and contemporary operas, ballets, operettas and musicals. In addition, different concerts and children’s performances are delivered and compositions of Estonian origin staged. Estonian National Opera is a repertory theatre, giving 350 performances and concerts a year, being famous for its tradition of annual concert performances of rarely staged operas, such as Alfredo Catalani’s La Wally (2007), Verdi’s Simon Boccanegra (2008), Rossini’s Guillaume Tell (2009), Bizet’s Les pêcheurs de perles (2010), Bellini’s I Capuleti e i Montecchi (2010), Rimsky-Korsakov’s The Tsar’s Bride (2011), etc.