World première at the Estonian National Opera on May 11th, 2012. Released in November 2014!
“A human being − this is the future!” (Amadeo Modigliani)

Watch fragments of the ballet on YouTube (HD, 9 min 40 sec) 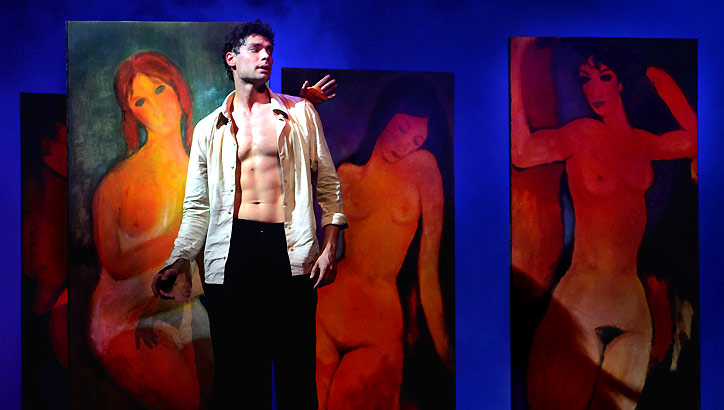 Paris at the beginning of the 20th century. Street café in Montparnasse. A cheerful and flirtatious Modigliani arrives at the cafe, drinks some wine and sits down at a table to draw. Soon, he is joined by other artists who have gathered at the café. Modigliani orders some wine, but instead of money, offers his drawing to the waitress. The waitress accepts it with contempt, casting a jaded look at the paintings already hanging on the walls of the cafe. The artists challenge each other to a drawing contest to see who draws best. Modigliani is acknowledged as the winner of the captivating competition. Their table is approached by an art dealer Leopold Zborowski, who offers Modigliani’s drawing to a rich client of his. Seeing the drawing, the man bursts into laughter, Modigliani is angered and they get into a row. Their friends try to make peace between the quarrellers. Modigliani becomes intoxicated and soon finds himself alone on the street. He imagines that he meets his destiny that makes him search for true love and an ideal woman. Reaching for the vision, the artist awakes and the phantom fades, but a woman’s shawl is left behind on the pavement. The policemen patrolling at the breaking dawn bring Modigliani back to reality. Zborowski on his way to the Académie Colarossi walks past, inviting him along.
Painting class at the Académie Colarossi. The students are drawing and Modigliani joins them. Soon, one of the students, the beautiful Jeanne Hébuterne, takes the model’s place. Jeanne recognises Modigliani and can hardly contain her joy. Once he has finished the portrait, the work-consumed Modigliani recognises Jeanne as his vision from the night before. The artist falls in love with Jeanne at the first sight and approaches the girl, donning the shawl from the street on her shoulders.
Modigliani’s studio. Modigliani tries to paint Jeanne, but his inspiration has abandoned him. Suddenly, the women in his paintings come to life and step down from the canvas. Modigliani is thrown into a fantastic swirl of dance; once he wakes from it, he realises that he draws his inspiration from none other than Jeanne. 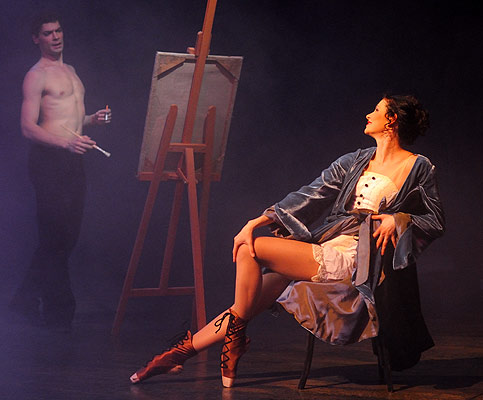 A few years have passed. The art dealer Leopold Zborowski and a gallery owner Berthe Weill are settling upon time for Modigliani’s first solo exhibition.
Opening of the exhibition at Berthe Weill’s gallery. Modigliani’s paintings are displayed in the gallery. People are curious and excited to look at paintings done in Modigliani’s peculiar style. Police enter the animated gallery and regard the exhibited nudes inappropriate and rude. They order that the exhibition be closed down. Modigliani and Jeanne are left by themselves. Jeanne asks Modigliani to calm down, but he is angered and hits her. In a fit of rage, Modigliani tears one of the canvases to pieces.
A room in a brothel. The room is full of bottles, thick cigarette smoke, and drunken and banal prostitutes and bohemians. A worried Zborowski enters to find Modigliani making love to prostitutes. He takes Modigliani away with one of them. Concerned about the artist’s health and financial situation, he traps Modigliani in the studio with the woman and an easel, so that the artist would start working. Modigliani begins painting the woman with passionate brushstrokes. Jeanne suffers from Modigliani’s faithlessness.
Later. A pregnant Jeanne is sitting at a table and drawing. A drunken Modigliani enters and picks a fight with her. Suddenly, he starts coughing, grabs a few paintings and runs out. Jeanne becomes lost in thought and is disturbed by dark and gloomy visions. At the appearance of a ragged and tired Modigliani, Jeanne awakes. They think of the future. A weary Modigliani falls asleep and Jeanne starts working on his portrait as she senses the inevitable tragedy. An alarmed Zborowski enters with his friends. By the atmosphere in the room he realises that the artist does not have long to live.
A dark room at a hospital for the poor. Modigliani is lying in bed, unconscious. His subconscious conjures up images about love, life and art. When these hallucinations fade, Modigliani dies. The heart-broken Jeanne is once again overcome by dreadful visions. She rises and follows them to the window…

The birth of a ballet − interview with Thomas Edur

Where did the idea to create a ballet about Amedeo Modigliani come from? 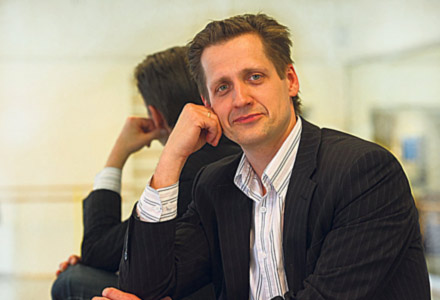 Recognition and search for ways of self-expression through one’s art is familiar to every artist. I wished to create a ballet that would speak about the sensitive inner world of the artist with its fragile self-confidence and self-esteem. I was familiar with Amedeo Modigliani’s art already in my childhood. My mother had many art books that I liked to browse. Modigliani’s works are not beautiful in the classical sense: his paintings, characterised by elongated necks and slanted eyes, come across as slightly primitive. He did not paint his models true to life, but focussed on their deeper souls. Thus, one can say that his paintings are like confessions. It is truly complicated to convey Modigliani’s passionate, controversial and very deep character as a painter, but the more people learn about his nature, the more he appeals to them. Being confident as well as vulnerable, he had a firm belief in what he did. Modigliani could be very stubborn and proud − if he did not like his client, he refused to sell his works, though he was constantly short of money. Nevertheless, Modigliani loved people and said: “A human being − this is the future!” It is widely thought that his drinking, drugs and scandalous love affairs only served as a ‘security blanket’ that helped him cover his delicate and vulnerable soul, and cope with his tuberculosis that proved fatal for him.
My ballet tells about Modiagliani’s last years when he led a light-hearted bohemian life and met Jeanne Hébuterne, the love of his life. This is a story about his relentless pursuits as an idiosyncratic artist, and passionate love that has no limits. The drama of the story could be likened to that of Romeo and Juliette. I try to put across the message that you must believe in what you do, even if the society does not understand you.
It is a lucky chance that the production team involved people who all have a personal connection with Modigliani. The artist Liina Keevallik as well as Irina Müllerson who co-authored the libretto with me regard Modigliani as their favourite artist. Tauno Aints was delighted by his works already as a small boy. It was a long-time wish of mine to create a full-length ballet to the music by an Estonian composer. When I suggested that Tauno Aints should write the score for the Modigliani’s story, his eyes lit up. His emotional music has qualities that I find to be well suited for the theme of this ballet. I think that with every day we became closer and closer as a creative team.

Ballet through a composer’s eyes − interview with Tauno Aints

Every artist feels a strong bond with his work. How has the creation of this ballet influenced you as a composer, as a person?

It has definitely had an effect on me both as a composer and as a person. I realised quite at the beginning that the music created for this ballet could not directly interpret the events in Modigliani’s life, nor could it describe his style. Rather, it should be guided by the feelings that his life and work evoke in me. Imagining the emotions that drove Modigliani to extremes was a powerful source of inspiration. Some moments were too intense for words. Analysing these events certainly changes both the person and the composer, and makes one take a long, hard look deep inside. At the same time, there were some technical issues − how can music portray the lack of inspiration, the moment inspiration is found, and the moment it completely engulfs the artist? Writing music for the ballet was very interesting as I could toy around with thoughts on inspiration, art and artistic people.
I have always found it interesting to think about everything around a piece of art and an artist − the mundane reasons that influence one artistic decision or another. Naturally, this is something that can mostly be sensed, not described rationally or in words. When the feeling is right, art is somehow able to transcend time and space and send shivers down your spine. The means of expression and the language that Modigliani uses speak to me, they touch me deeply. And the musical vision born out of that touch is what you hear in the ballet.

The roots of the Estonian National Opera go back to 1865, when the song and drama society Estonia was founded. In 1906, the society became the basis for a professional theatre. The ballet troupe began regular work in 1926, but the first full-length ballet, Coppélia by Delibes was performed in 1922 already. Since 1998, the theatre is officially named the Estonian National Opera. Estonian National Ballet that operates under Estonian National Opera was founded in 2010, employing approximately 60 dancers, being the country’s largest ballet company. Young choreographers are constantly enriching its repertoire of standard favourites with contemporary pieces and occasional avant-garde projects. The Artistic Director and Chief Conductor is Vello Pähn, the Artistic Director of the Estonian National Ballet is Thomas Edur and the General Manager is Aivar Mäe.
The theatre’s repertoire includes classical and contemporary operas, ballets, operettas and musicals. In addition, different concerts and children’s performances are delivered and compositions of Estonian origin staged. Estonian National Opera is a repertory theatre, giving 350 performances and concerts a year, being famous for its tradition of annual concert performances of rarely staged operas, such as Alfredo Catalani’s La Wally (2007), Verdi’s Simon Boccanegra (2008), Rossini’s Guillaume Tell (2009), Bizet’s Les pêcheurs de perles (2010), Bellini’s I Capuleti e i Montecchi (2010), Rimsky-Korsakov’s The Tsar’s Bride (2011) and Snegurochka (2014), as well as Der Rosenkavalier by Strauss and Gounod’s Roméo et Juliette (2013).