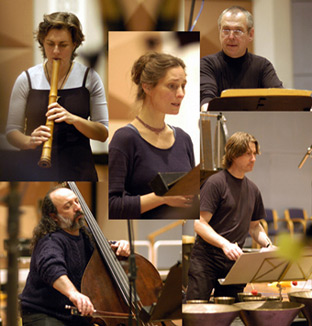 Jouissance was formed in 1993 to explore a dialogue between Medieval and Byzantine chant, and contemporary culture.
The musicians share a fascination with the mysticism, sensuality and rapture found in the works of Hildegard von Bingen, Peter Abelard and the Byzantine Rite. The engagement with this music is informed by the diverse nature of the performers’ experience: from new complexity to minimalism, from Japanese zen to jazz-rock crossover, from blues and ethnic music to all forms of opera. Improvisation is one of the elements used to site the exploration in an “unstable” environment, encouraging new insights and glimpses of other possible readings of the ancient work in a contemporary framework.

The Akathistos hymn – a massive work of the Byzantine rite. This intensely beautiful set of melismatic chant in praise of the Virgin Mary, has multi-layered text rich in imagery. Thought to have been composed in the 6th century, its various poetic genres hint at even earlier liturgies of the church. An epic work of Byzantine art, the Akathistos hymn transcends the everyday world and transports the spirit into a state of rapture.
The Akathistos has also a historic context to it, a backdrop that has surrounded the hymn with legend. On three separate occasions in the 7th cent, the capital of Eastern Christendom, Constantinople, was attacked and held under siege. Through the miraculos intervention of the Theotokos, the city repelled the invading armies. The hymn “Ti hypermacho stratigo” links the safety of Constantinople with the benevolent care of the Virgin Mary. Since that time, the “Akathistos” and “Ti hypermacho stratigo” have been sung together as a thanksgiving to the Virgin Protectress of Constantinople.

Near Divine. Jouissance is an ensemble which embodies a feeling… of primal ecstasy. (Sydney Morning Herald, 14.03.02)
… the extraordinary impact of their enterprising fusion of old and new, East and West, Latin and Byzantine… Their near hysteric outpourings… to the serene… combined discipline and freedom… a barrier-breaking treat. (The Age, Melbourne 11.03.02)
… an enthralling experience, meditative, impassioned, sensual and uplifting, with moments of striking beauty. (The Advertiser, Adelaide, 11.03.02)
… the night’s instrumental beauties came in the unpredictable passages: the breathy elliptical Japanese flute work of Norman, Tsiavos’ wide-ranging bass support, and the assortment of gongs, metal sheets and cymbals that Neville applied to the texture: subtle ornamentation of the ensemble’s solid and daring structure. (Clive O’Connell, The Age, June 03)
The Australians charm with their originality. …the music disappears between the two worlds of reality and unreality. The musicians were able to perfectly convey the archaic ether, their extasy became a part of the audience. (Pärnu Postimees, Estonia, 13.08.99)
… Jouissance has realised a soundworld that is much more than an accompaniment to the lyrics of Hildegard and Abelard, it is a highly imaginative evocation of the very aura of rapture to which these lyrics so often aspire. (Soundscapes, Australia, May 1994)
… wrenchingly ecstatic… Jouissance displays elegance, linear firmness and a deep spirituality in its performances. …one of this year’s concert going delights. Jouissance cannot be commended highly enough. (Clive O’Connell, The Age, Melbourne, Aug 97)
The best of the locals for the 1997 season… was Jouissance. My longing for adventurousness was gratified … these musicians produced an experimental fusion that gave its audience a rich aesthetic experience. (Review of 1997 music season in Melbourne, The Age, Dec 97)

Jouissance has recorded several CDs and one DVD of their Mikres Ikones program recorded live in concert in 2003. The group has recently recorded a new CD entitled Akathistos Fragments (ABC Classics 476 8064).