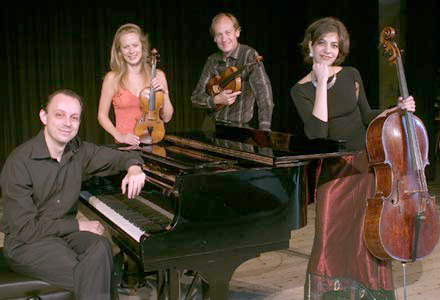 Bartolomeo Cristofori lived in Padua from 1655 to 1731 and is generally considered to be the ’inventor’ of the pianoforte, the instrument from which the piano as we know it today has developed. The Piano Quartet Amsterdam named itself after this Italian because of the central role the piano plays in the quartet.

The members of Cristofori Piano Quartet come from 4 different countries – Germany, Italy, Israel, and the Netherlands. Paolo Giacometti (piano), Eva Stegeman (violin), Johannes Erkes (viola), and Timora Rosler (cello) can each look back ob many years of experience as soloists as well as chamber musicians. For this reason the ensemble has been able to establish itself quickly in the international chamber music scene since its start in the summer of 2002. The quartet has been invited to perform at numerous festivals and concert series. In addition they have made various live radio recordings.

Distinguished with the 2001 Edison Classical Music Award for best performing Dutch musician, Paolo Giacometti performs all over the world as a soloist and as a chamber musician, both on period as well as on modern instruments.
Giacometti was born in Milan in 1970, but has been living in the Netherlands since his first year. He studied with Jan Wijn at the Sweelinck Conservatorium in Amsterdam where he graduated with distinction in 1995. The summer master classes held by György Sebök in Switzerland also played an important role in his musical development. Giacometti has won many prizes both at national and international competitions. He has performed with renowned orchestras under distinguished conductors such as Frans Brüggen, Kenneth Montgomery, Lauren Petitgirard, Michael Tilkin and Jaap van Zweden. With Jaap van Zweden he recently performed Beethoven’s 1st and 3rd Piano Concertos during a successful tour in the UK with the Netherlands Symphony Orchestra.
Apart from his activities as a soloist, Giacometti’s love for chamber music has resulted in a successful co-operation with leading musicians. Giacometti has performed in concert halls all over the world including the Concertgebouw (Amsterdam), Teatro Colon (Buenos Aires), Wigmore Hall (London) and Théâtre du Châtelet (Paris).
Giacometti records exclusively for Channel Classics. His impressive discography has been widely acclaimed by the international press. His recordings include Rossini’s complete piano works, a remarkably novel project that started in 1998. In Rossini’s homeland critics say: “… Rossini has finally found his pianist…” For the 3rd recording of this series Giacometti received the Edison Classical Music Award 2001. His recording of Schumann’s Humoreske, Fantasiestücke and Toccata received the BBC Music Magazine’s Benchmark and Performance of Outstanding Quality distinctions. Giacometti’s recording of the Dvořák and Schumann piano concertos were acclaimed by Gramophone as “… one of the best concerto discs I have heard in a long while…” Among his chamber music recordings, a CD with works by Schubert (with cellist Pieter Wispelwey) received the Choc du Monde de la Musique and Luister 10 awards, while another recording with works by Chopin, Fauré and Poulenc (also with Pieter Wispelwey) was awarded the Diapason d’or.
Paolo Giacometti is also a dedicated piano professor at the Utrecht Conservatory of Music.

The Dutch violinist Eva Stegeman (1971) studied with Davina van Wely at the Royal Conservatory in The Hague and with David Takeno at the Guildhall School of Music and Drama in London where she was awarded the M Warsaw Chamber Music Award. In 1995 she was the 2nd prizewinner at the final of the National Oskar Back Violin Competition, performing Beethoven’s Concerto at the Royal Concertgebouw in Amsterdam.
She has taken part in international seminars with great teachers such as György Sebök, Viktor Liberman, Herman Krebbers, Boris Belkin and Lorrand Fenyves. For several years she was the principal violinist of the National Youth Orchestra of Holland.
Stegeman regularly appears as a soloist throughout Holland as well as in Germany, Austria, France, Norway, Spain, England, and Denmark, performing violin concertos by Bach, Vivaldi, Mozart, Beethoven, Mendelssohn, Saint-Saëns and Pärt with orchestras such as the Orfeo Orchester Budapest, Combattimento Consort Amsterdam, the Städtisches Orchester Trier or Amsterdam Sinfonietta. Stegeman is a regular guest director of the European Union Chamber Orchestra with whom she also appears as a soloist. Furthermore she is a member of the ensemble Combattimento Consort Amsterdam with whom she has toured Europe, Japan, and South-America, and has taken part in various CD recordings as well as numerous radio broadcasts.
As a chamber music player Stegeman is much in demand; she performs regularly with chamber music ensembles in various different formations. Outside Holland she has been invited to perform at numerous international chamber music festivals such as in Austria (Toujours Mozart in Salzburg and Vienna), Italy (Spoleto), Germany (Harzburg, Rellingen and Aschau in Chiemgau), England (Prussia Cove and Bath) and Switzerland (Ernen and Sierre), etc. She successfully worked and performed with great musicians such as Gordan Nikolic, Vladimir Mendelssohn, Jan Willem de Vriend, Alois Brandhofer, Bruno Weinmeister and the Netherlands Blazers Ensemble. In 1998, at the invitation of the Concertgebouw in Amsterdam, she took part in a performance of the Brahms’ 2nd String Sextet with the legendary Isaac Stern. She is a member of the Leupold Trio (Baroque).
Stegeman is founder and artistic director of the Chamber Music Festival Haaglanden which yearly takes place in The Hague since 2003. Under her direction the festival was able to establish itself rapidly in the Netherlands.
She plays a G B Rogeri (Brescia) violin from around 1680. 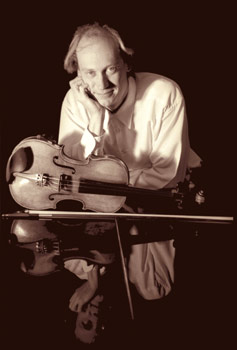 The German viola-player Johannes Erkes studied at the Munich Conservatory with Oscar Lysy. Subsequent studies with Kim Kashkashian complemented his musical training. As soloist and chamber musician Erkes is equally in demand and gave appearances in all the great concert halls in Europe, America, and Japan. He performed concertos with orchestras such as the Orfeo Orchestra Budapest, the Salzburger Kammerphilharmonie, the Orchestra da Camera di Padova e del Veneto, the Klassichen Philharmonie Bonn and the Staatsorchester Braunschweig. He was invited at numerous international chamber music festivals such as the Helsinki Festival, the Kuhmo Chamber Music Festival (Finland), the Bath Festival (UK), the Oleg Kagan Musikfest in Kreuth (Germany), the Rossini Festival in Pesaro (Italy), the festival “Begegnungen” (Salzburg) and the Festival of Besançon (France). His musical partners among others were Valery Affanassiev, Gordan Nikolic, Michel Dalberto, Natalia Gutman, Alexander Lonquich, Karl Leister, Charles Neidich, Alexander Janiczek and Wolfgang Schulz. Erkes is a regular guest leader in the Camerata Academia Salzburg.
Erkes made numerous radio broadcasts and compact disc recordings for the WDR, the BBC, RAI and the labels BIS and Festivo Records. In 1993 he founded the chamber music festival Festivo in Aschau im Chiemgau (Germany), which under his direction quickly gained an international reputation. In 2003 and 2005 he was artistic director of the Toujours Mozart festival in Salzburg and Vienna. In November 2004 he was awarded the Kulturpreis des Landkreises Rosenheim (Germany).
Johannes Erkes plays a viola of Giuseppe Guadagnini from the year 1798. 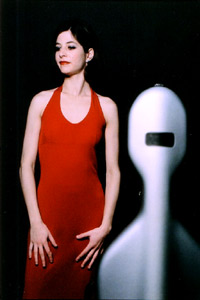 The Israeli cellist Timora Rosler took 1st prize at the 1996 Stuttgart International Cello Competition. In 1997 she won the Vriendenkrans of the Royal Concertgebouw in Amsterdam. She was praised by the jury as follows: “Timora Rosler has a capturing talent, intimate expressiveness, virtuosity and a natural feeling for the composition. Her interpretation is exceptionally fascinating”.
A year later she won a special prize for her interpretation at the XI International Bach Competition in Leipzig. She also won the top prize at the Caltanissetta International Duo Chamber Music Competition in 1996 in Italy with her duo-pianist Klára Würtz. Since 1985 she was awarded the America Israel Cultural Foundation Scholarship and later became a member of the Distinguished Young Artists Chamber Music Group at the Jerusalem Music Center. She has attended master classes with artists such as Janos Starker, Heinrich Schiff, Boris Pergamenschikov, Anner Bijlsma, Daniel Shafran and Lynn Harell.
Timora has participated in numerous chamber music festivals including Ravinia, Aspen, Banff Center for the Arts, the Manchester Cello Festival, the International Musicians Seminar in the UK, Holland Music Sessions, Pro Festival in Germany, the Maurice Ravel Summer Academy in France.
Timora has appeared in concerts in Europe, the USA, Canada, Argentina, and Israel. As a soloist she has performed with different orchestras such as Philharmonia of the Nations, Janácek Philharmonic, Slovak Sinfonietta, Donetsk Philharmonic, National Symphony of Ukraine, Haifa Symphony Orchestra and the Eastern Connecticut Symphony Orchestra. With the Orquesta de Cámara Mayo of Buenos Aires she toured extensively throughout the Netherlands and Argentina, with works of Piazzolla. Both a television and a CD recording were made of this collaboration. She has also made recordings for the Israeli, Hungarian, German, Dutch and American Radio.
Timora holds a Performing Musician degree from the Sweelinck Conservatory in Amsterdam, where she studied with Dmitri Ferschtman, and a Certificate of Performance from Yale University where she was a pupil of Aldo Parisot.
Timora plays a Thomas Dodd cello from 1800.