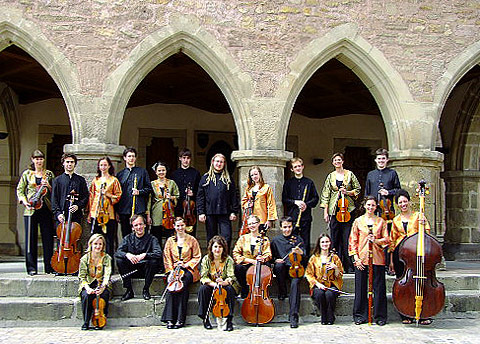 The European Union Baroque Orchestra (EUBO) is like no other orchestra: its modus operandi since its foundation in 1985 has been to audition and select new personnel annually. EUBO’s ephemeral existence makes its concerts special: live performances enjoying all the technical accomplishment of the best young baroque musicians in Europe, allied to an infectious undimmed sense of discovery and enjoyment. “The skilful playing of this extraordinary pan-European orchestra…augurs well for the future of Baroque music-making in Europe.” (International Record Review, 2014)
Members of EUBO come from all over the European Union to gain performing experience, working together under the inspirational leadership of Music Director Lars Ulrik Mortensen and some of the world’s finest baroque musicians. Ton Koopman, Margaret Faultless, Enrico Onofri, Rachel Podger, Riccardo Minasi, Paul Agnew, Gottfried von der Goltz and Stefano Montanari have all been guest directors in recent seasons.
Tours take the talented young orchestra to all corners of Europe − from celebrated city concert halls, to seaside summer festivals, to monasteries nestling in autumnal forests, and to winter celebrations in beautiful churches. And at the centre of these great arcs of European travelling EUBO has established residencies in several cities, most notably as “orchestra-in-residence” in Echternach, Luxembourg, where, with the support of its local partners, it is creating a centre of excellence for baroque music.
Over the years EUBO has recorded several CDs, the last four under the direction of Lars Ulrik Mortensen. The CD release Peace & Celebration, featuring choral and orchestral works by Handel, was recorded live in concert in Londonwith the Choir of Clare College, Cambridge, in September 2013. Gramophone magazine praised “the refreshing spontaneity of this live recording. The rapturous dialogue of Mortensen and his youthful crew…put some more experienced Baroque bands to shame.” EUBO’s recording Pure Handel with soprano Maria Keohane was shortlisted for the 2014 Gramophone Awards: “a generous celebration of this estimable organisation’s (EUBO) continuing high achievement. These are live-wire performances, technically excellent and propelled with exactly the right degree of driving energy…” (Gramophone, August 2014).
Between 2015 and 2018, the activities of EUBO are an integral part of EUBO Mobile Baroque Academy (EMBA), a Creative Europe co-operation project, co-funded by the European Union and organised by EUBO and its nine partners. The orchestra has been honoured with the status of Cultural Ambassador for the European Union in perpetuity. Flying the flag for Europe, “EUBO is” as former EC President Barroso says, “a perfect symbol of the power of integration, a subtle and potent instrument of harmonisation between people and nations”.

A Vivaldi. Concerto for strings and basso continuo in D major, RV 124 on YouTube, 14 min 33 sec

When Lars Ulrik Mortensen began studying musicology at university, he came across a book about English music for the virginal − he was fascinated, and it led him to the harpsichord. He studied first in Copenhagen and then in London, becoming harpsichordist with London Baroque and Collegium Musicum 90. In 2004, after a long association with the European Union Baroque Orchestra as harpsichord tutor and guest director, Lars Ulrik Mortensen became its Music Director. A Financial Times reviewer, writing after a EUBO concert, said “Mortensen is exceptional not just for his scholarship and virtuosity at the keyboard, but also because he makes music with his entire body and soul.” In his home country Lars Ulrik is the artistic director of Concerto Copenhagen, whose opera productions at the Royal Theatre in Copenhagen have helped to build a profile for the group nationally and internationally. In addition to his work with his “own” orchestras, Lars Ulrik also performs extensively as guest director, soloist and chamber musician in Europe, the USA, Japan and Australia, with distinguished colleagues including Emma Kirkby, Susanne Rydén, Maria Keohane, John Holloway and Jaap ter Linden. Maestro Mortensen has received a number of prizes, among them Denmark’s most prestigious music award, the Léonie Sonning Music Prize in 2007. Lars Ulrik Mortensen’s many CD recordings have reaped major awards. Directing Concerto Copenhagen, his recent recordings include the complete harpsichord concertos by J S Bach, Haydn piano concertos, as well as symphonies by Danish composers Hartmann, Kunzen and Gerson.

EUBO Mobile Baroque Academy (EMBA) will build on the 30-year successful track-record of the European Union Baroque Orchestra (EUBO) in providing training and providing opportunities for young EU orchestral musicians and a bridge into the profession. EMBA extends and develops the possibilities for players of baroque instruments who intend to pursue a professional career.
EMBA is broader in scope than the EUBO programme: it offers a pathway from an earlier stage of conservatoire training via orchestral experience through to the first steps in the professional world. The EMBA project addresses the unequal provision across Europe of opportunities for baroque music education for performers and audiences. EMBA identifies areas where the playing field can be levelled in the early music sector and will establish four “bridges” (listed below) to meet these needs.
EMBA will nurture talent, maintain performance quality and encourage creativity and the mobility of artists and ideas. The activities of EMBA comprise music education (masterclasses, courses), performances (international touring, recordings), audience development (including schools work, project with puppeteers), an orchestral apprentice scheme, and a digital program of interviews, comment and advice related to baroque music and period performance.
The four “bridges” principle refers to EMBA’s mission to 1) reduce the geographical divergence in resources and opportunities; 2) create inspirational live performances and enagage audiences; 3) equip young performers with a portfolio of skills; and 4) to embrace new technologies to disseminate expertise, performances and resources.
EMBA partners are: European Union Baroque Orchestra, Association of European Conservatoires, Concerto Copenhagen, Estonian Record Productions (ERP), Villa Musica Rheinland-Pfalz, Trifolion Festival Ville d’Echternach, Arts Council Malta, Koninklijk Conservatorium Den Haag, Universitatea Nationala De Muzica Din Bucuresti, and St John’s Smith Square, London.

Releases in co-operation with ERP