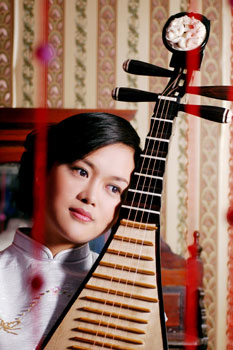 Lan Weiwei (in Chinese 兰维薇) was born in Sichuan, China, 1980.
She has pursued the career of a pipa-player for more than 20 years, and considered to be one of the best-pipa players in China.
She has won a multitude of prizes since childhood. In recent years, Lan Weiwei has been invited to guest-perform in Germany, Belgium, Switzerland, Austria, Mongolia, Azerbaijan, Estonia, Canada, Mexico, Vietnam, Indonesia, etc. From the very start of her artistic career she has dedicated herself to introducing the traditional and folk music of China to the Western world. In addition, she has intense passion in playing contemporary music of different form – solo pieces, ensemble music, and concertos (Tan Dun, etc) with symphony orchestra. She has held recitals in Beijing, Freiburg, Taipei, etc. She has co-operated with various orchestras around China such as Beijing, Shanghai, Henan, Shanxi, Inner Mongolia, Hongkong as well as in Taipei, Estonia, Freiburg, Toronto. Through her performing art pipa music has become a bridge between ancient and modern times as well as between the East and the West.
Lan Weiwei  is teaching at the Central Conservatory of Music in Beijing, China.

Pipa (in Chinese 琵琶) is a plucked Chinese string instrument. The word pipa is made up of two Chinese syllables, pi (琵) and pa (琶). These are the two most common ways of playing this instrument. Pi is to push the fingers of the right hand from right to left, thus more than one finger can be used at a time striking multiple notes, and pa is to pull the thumb of the right hand from left to right, in the opposite direction. The strings were originally played using a large plectrum in the Tang dynasty, then gradually replaced by the fingernails of the right hand. Since the revolutions in Chinese instrument making during the XX century, the softer twisted silk strings of earlier times have been exchanged for nylon-wound steel strings, which are far too strong for human fingernails, so false nails are now used, constructed of plastic or tortoise-shell, and affixed to the fingertips with the player’s choice of elastic tape.
Prototypes of the pipa already existed in China in the Qin dynasty. At that time, there were two types of pipa. One was straight-necked, with a round sound box constructed from lacquered Paulownia wood, and two faces mounted with leather. The other was believed to be inspired by the primitive forms of zheng, konghou, and zou. It also has a straight neck, a round sound box, and also four strings, along with twelve standards of notes. This model was later developed into the instrument known today as the ruan. The modern pipa is closer to the instrument which originated in Middle-East and was introduced into China beginning in the late Jin dynasty. By the Tang era, the pipa had become popular in the imperial court. It had a crooked neck, 4 or 5 silk strings, and 5 or 6 frets, and was played with a plectrum in a horizontal position. As the ages went by, the crooked neck was replaced by a straight one, the number of frets increased to between 14 or 16, and to 17, 24, 29, or 30 in the 20th century. The 14- or 16-fret pipa had frets arranged in approximately equivalent to the western tone and semitone, starting at the nut, the intervals were 1–1/2–1/2–1/2–1–1/2–1/2–1/2–1–1–3/4–3/4–1–1–3/4–3/4. In the XX century the number of frets was increased to 24, based on the 12 tone equal temperament scale, with all the intervals being semitones. Since then the number of frets has been extended to 29 or 30. The traditional 16-fret pipa is becoming less common. The plectrum was replaced by fingernails and the horizontal playing position was replaced by the vertical position. During this time, the 5-stringed pipa became lost. The pipa became a favourite in the Tang dynasty, during which time Persian and Kuqan performers and teachers were in demand in the capital, Chang’an. Many delicately carved pipas with beautiful inlaid patterns date from this period. Masses of pipa-playing Buddhist semi-deities are depicted in the wall paintings of the Mogao caves near Dunhuang.
Several related instruments in Far-East and Southeast Asia are derived from the pipa; these include the Japanese biwa, the Vietnamese đàn tỳ bà, and the Korean bipa.

Outside of China exclusively managed by ERP from Sep 1st, 2009
Contact: e-mail artists@erpmusic.com
See also other musicians reperesented by ERP