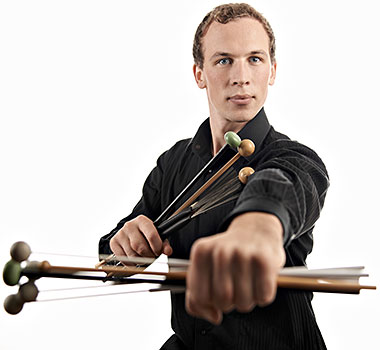 Heigo Rosin is the first solo percussionist to emerge out of Estonia. Despite his young age he has appeared frequently as a soloist with numerous symphony and chamber orchestras. Additionally, he has performed with different solo programs both in Estonia and abroad. There are a growing number of compositions being especially written for Heigo. In 2016, Heigo was also selected as principal percussionist with full scholarship to the World Percussion Group tour in the USA.

In 2004, Heigo Rosin started his percussion studies at Heino Eller Tartu Music College. Despite the lack of instruments in his hometown and literally practicing all percussion techniques on his bed, he was accepted to study in Estonian Academy of Music and Theatre (EAMT) in 2008. He completed his studies (Bachelor and Masters degree) there in 2014 with a distinction in Rein Roos’ percussion class. Simultaneously with EAMT Heigo studied in the Royal Conservatoire of Antwerp and earned his second Bachelor and Masters degree with a distinction in Prof Carlo Willems’ and Prof Koen Wilmaers’ percussion classes. Since 2014, Heigo has been studying at the Royal Academy of Music Aarhus / Aalborg in Prof Henrik Knarborg Larsen’s percussion class to earn a soloist diploma. During his years of studies Heigo has participated in numerous master classes of teachers and educators from all over the world including She-E Wu, Pius Cheung, Emmanuel Séjourné, Mark Ford, David Friedman, Hakim Ludin, and Pedro Carneiro. He has also participated in the drum clinics of Dave Weckl and Sheila E. In addition to that Heigo has had personal percussion sessions with the world famous solo percussionist Dame Evelyn Glennie. Additional honors awarded to Heigo through various national and international competitions include 1st Prize at the Contemporary Music Competition De Linkprijs in the Netherlands (2013), 1st Prize at the Yamaha Scholarship Competition for Percussion (2013), 2nd Prize through the Estonian Academy of Music, classical music radio Klassikaraadio prizes at the Estonian TV competition “Classical Stars” (2013) and 1st Prize at the Estonian National Competition for Winds and Percussion in Tallinn (2012).

Heigo’s performances are hypnotizing and his choice of program content is unique. The way he breathes life into the rhythms in the music is enrapturing and the melodies and harmonies are mesmerizing; his performances carry audiences to other worlds. On the stage, his presence is fluid and versatile; sometimes an angel, who comforts, protects and brings blessings, sometimes a demon that shadows the whole hall with darkness. While performing he likes to play with emotions and energy, establishing a deep connection with the music he plays. Over ten years of karate practice has inspired Heigo to combine the movements of karate with his percussion playing. This unique aspect of his playing has given Heigo the nickname “Percussion Athlete” and makes his performances extraordinary not only to hear but to see.