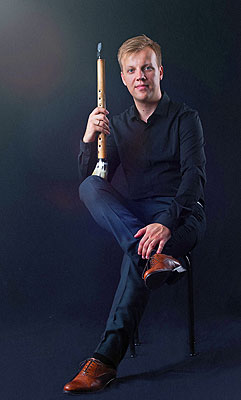 Vytautas Kiminius is one of the most prominent players of the Lithuanian folk instrument birbynė and the first and only one to study it abroad. Kiminius introduces this unique wind-instrument by performing classical repertoire throughout the world, one of the most significant events so far has been playing birbynė during a live broadcast of Deutsche Welle’s project The Sound of Europe in 2015. Kiminius has studied in Stasys Šimkus Conservatory in Klaipėda and has obtained a bachelor’s degree in birbynė at the Lithuanian Academy of Music and Theatre (2014) as well as master degrees in orchestral conducting (Prof Juozas Domarkas, 2016) and oboe (Prof Robertas Beinaris, 2018). Kiminus continued his studies as an intern in Conservatorio di Verona Evaristo Felice Dall’abaco in Italy under the tutelage of the oboist Alessandro Baccini. Kiminius has won Grand Prix at the international competition Renaissance in Armenia and the first place in the competition of the international association Menas ir švietimas XXI amžiuje. He is also a three-time laureate of Jonas Švedas soloists’ competition. The President of the Republic of Lithuania has awarded Kiminius with a diploma in 2013 for international appraisal. In 2016, Kiminius received a diploma from the Minister of Education of Lithuania for creative ideas and their implementation into Lithuanian song festival Tu mums viena as well as for promoting cultural values amongst Lithuanian youth. As a part of the project Traveling Youth Orchestra, Kiminius has had an opportunity to perform both as a soloist and orchestral player in many European countries. The audience of the Glasperlenspiel festival may remember Kiminius from the year 2019 when the musician performed at the final concert with Čiurlionis Quartet.’ 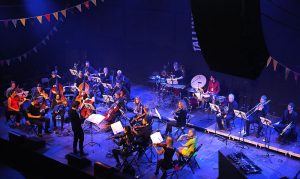 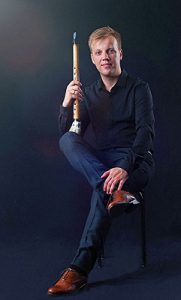 The Glasperlenspiel Sinfonietta is undeniably one of the festival’s symbols, being a long-time partner of the Glasperlenspiel and bearing the same name as the festival since 2012. The orchestra, founded in 2009, consists of professional musicians and its size varies from a string ensemble to a large orchestra depending on repertoire. The Glasperlenspiel Sinfonietta performs a wide variety of music from Bach to Pärt and Piazzolla, and besides interpreting classical masterpieces, the orchestra often participates in different crossover projects. Since 2012, the artistic director of the Sinfonietta is Andres Mustonen whose charismatic personality and experimental ideas greatly shape the choice of the repertoire and the manner of performance. Sinfonietta has played numerous works by contemporary composers collaborating with Mustonen as Valentin Silvestrov, Arvo Pärt, Gija Kancheli, Alexander Knaifel, Erkki-Sven Tüür, Galina Grigorjeva and Peeter Vähi. Among the most outstanding events of the current concert season the cooperation with acknowledged musicians Vadim Repin, Ivari Ilja and composer Arvo Pärt as well as participation in London West End International shows can be named. The orchestra has performed on world-famous stages and has given concerts almost everywhere in Europe, South-America, Russia, Iran and other countries. It is worth mentioning that Sinfonietta was the first Estonian collective to play in the Henry Le Boeuf Hall in Brussels and at the Concertgebouw in Amsterdam. The orchestra has participated in numerous festivals in Estonia and abroad as well. Regardless of the style of music, the orchestra can be recognized by an energetic, fresh and emotional way of playing that offers listeners joyful and pleasurable experiences and brings to life compositions created centuries ago. 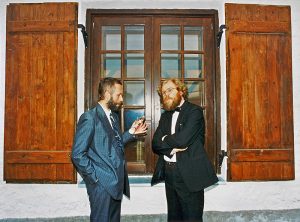 Birbynė Concerto: History is merciless – countries that once played an important role disappear from the world map, as well as the peoples and languages spoken there. It is this fate that has hit Prussia, the Old Prussians and the Prussian language. In recent years, many musical collaborative projects have taken me to Memel, or Klaipėda, the city of former Prussia, allowing me to discover a legacy of pagan backgrounds from Old Prussians. Among other things, a number of archaic folk songs have survived. One of them, Mīla swāiksta Saulīka, Mīla Dēiwas dukrīka (‘Dear Bright Sun, Dear Daughter of God’), seemed extraordinary inspiring. Having been requested by the Lithuanian Philharmonic Society, Vilnius Festival and Lithuanian Chamber Orchestra to compose a concerto for birbynė solo and orchestra, I decided to use just this melody as the starting point for the work. In addition to birbynė, the rustic percussion instruments – wooden gong and cowbells – used in the score will probably add some folkloristic flavour to the work being composed. (Peeter Vähi)

The concert will be recorded by Estonian Public Broadcasting. Live broadcast on the channel of Klassikaraadio (Classic Radio).