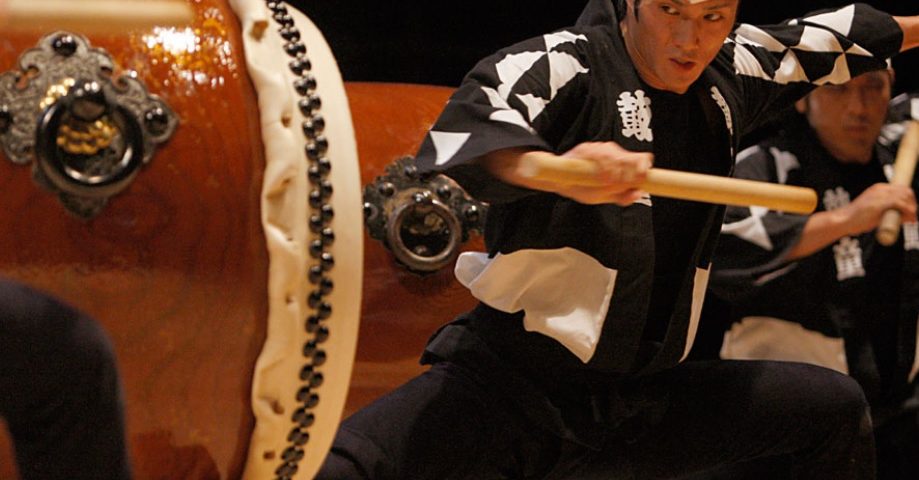 Taiko are categorized into 2 types of construction. Byou-uchi daiko (鋲撃ち太鼓) have heads nailed to the body. Tsukushime-daiko (付締 め太鼓) have heads sewn onto iron rings, which are then laced to each other around the drum body. Byou-uchi daiko are typically hollowed out of a single piece of wood. The preferred wood is keyaki (欅) due to its density and beautiful grain, but a number of other woods are used. Byou-uchi daiko cannot be tuned, and their sizes are limited by the diameter of the tree they are made from. The typical byou-uchi daiko is the nagado-daiko (長胴太鼓, long-body taiko). Nagado-daikos are available in a variety of sizes, from 12 to 36 inches (head diameter). Nagado-daikos over 36 inches are also available, but they are referred to as ō-daiko (大太鼓, ‘great drum’). The largest ō-daikos (with a length of 2.4 m, a maximum diameter of 2.4 m, a weight of 3 tons, made out of a single piece of wood from a 1200 year old tree) are too big to move and permanently reside inside a temple or shrine. Tsukeshime-daiko are available in a wide variety of styles, and are tunable. This style of taiko is typically tensioned before each performance. The tensioning system is usually rope, but bolt systems and turnbuckles have been used as well. Tsukeshime-daiko can either have stitched heads placed on bodies carved from single piece of wood, such as the shime-daiko and tsuzumi, or stitched heads placed on a stave-construction body such as the okedo-daiko.