Concerts and events in 2006 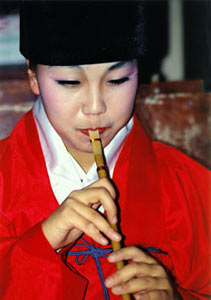 Sufism or tasawwuf, as it is called in Arabic, is generally understood by scholars and Sufis to be the inner, mystical, esoteric, or psycho-spiritual dimension of Islam. In spite of its many variations and voluminous expressions, the essence of Sufi practice is quite simple. It is that the Sufi surrenders to God, in love, over and over; which involves embracing with love at each moment the content of one’s consciousness (one’s perceptions, thoughts, and feelings, as well as one’s sense of self) as gifts of God or, more precisely, as manifestations of God. Ṭarīqah (Sufi order) may be associated with Shi’a, Sunni and other currents of Islam, or a combination of multiple traditions. Sufi thought emerged from the Middle East in the 8th cent, but adherents are now found around the world. 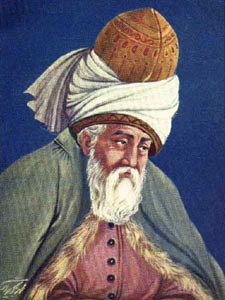 Sufism has produced a large body of poetry in Turkish, Persian and Urdu languages, which notably include the works of Mawlānā Jalāl ad-Dīn Muhammad Rūmī (Celâladin Mehmet Rumi in Turkish, 1207–1273 AD, a poet, lawyer, and Sufi theologian), as well as numerous traditions of devotional dance, such as Sufi whirling, and music, such as qawwali.
The Mevlevi, one of the most well-known of the Sufi orders, was founded by the followers of Rūmī in 1273 AD in Konya, present-day Turkey. They are also known as the whirling dervishes  due to their famous practice of whirling – zikr (remembrance of Allah) in the form of a dance and music ceremony called the sema. The Mevlevi were a well established Sufi order in the Ottoman empire, and many of the members of the order served in various official positions of the Caliphate. The centre for the Mevlevi order was in Konya, in Turkey, where Rūmī is buried. There is also a Mevlevi monastery in İstanbul, where the sema ceremony is performed and accessible to the public. 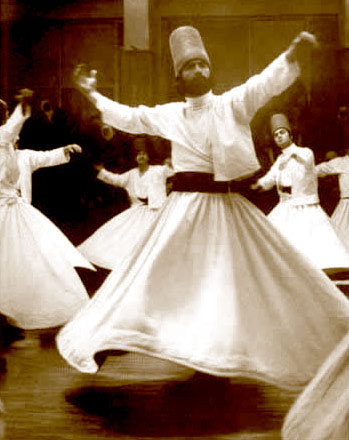 The practice of Sufi whirling, is a twirling meditation that originated among the ancient Indian mystics and Turkish Sufis, which is still practiced by the dervishes (members of Sufi ascetic religious tarikat or “confraternities” known for their extreme poverty and austerity) of the Mevlevi order. The sema represents a mystical journey of man’s spiritual ascent through mind and love to “perfect”. Turning towards the truth, the follower grows through love, deserts his ego, finds the truth and arrives to the “perfect”. He then returns from this spiritual journey as a man who has reached maturity and a greater perfection, so as to love and to be of service to the whole of creation.
Following a recommended fast of several hours, Sufi whirlers begin with hands crossed onto shoulders and may return their hands to this position if they feel dizzy. They rotate on their left feet in short twists, using the right foot to drive their bodies around the left foot. The left foot is like an anchor to the ground, so that if the whirler loses his or her balance, he or she can think of their left foot, direct attention towards it and regain balance back. The whirling is done on the spot in an anti-clockwise direction, with the right arm held high, palm upwards, and the left arm held low, palm downwards. The body of the whirler is meant to be soft with eyes open, but unfocused so that images become blurred and flowing. A period of slow rotation is followed by a gradual build up of speed over the next half an hour. Then the whirling takes over. When the whirler is whirling so fast that he or she cannot remain upright, his or her body will fall by itself. The whirler does not consciously make the fall a decision or attempt to arrange the landing in advance; if his or her body is soft he should land softly – and the earth will absorb the energy. If the idea of letting oneself fall is too much for the practitioner then the whirler should allow himself to slow down very slowly. If the whirler has been whirling for an hour then the process of slowing down might take some time. Once the whirler has fallen, the second part of the meditation starts – the unwhirling. Sometime and somewhere, the whirler rolls onto his stomach immediately so that his bare navel is in contact with the earth. The practitioner feels his body blending into the earth like a small child pressed to his mother’s breasts. After the meditation whirlers try to be as quiet and inactive as possible. 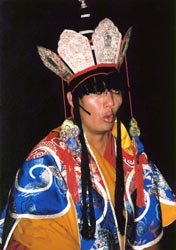 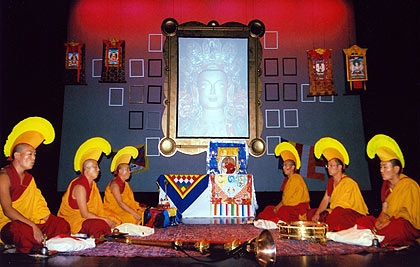 To preserve the most advanced and esoteric teachings, the Gyuto Tantric University was founded in 1474 by Gyuchen Kunga Dondrub, a principal disciple of His Holiness the 1st Dalai-lama. The practice in the monastery was based on the contemplation and the rituals of Guhyasamāja tantra. The original crew of 32 monks lived and breathed the universe of this tantra and its mandala of bliss-void-invisible. In particular, a style of overtonal guttural chanting was developed, in which each monk sings a chord containing 2 or 3 tones simultaneously. The men’s voices are pitched so low (A of contraoctave) that one wonders if this can really be human beings singing. This remarkable, transcendental sound is thought to arise only from the throat of a person who has realised selfless wisdom. This kind of music emanates from samādhi (a trance-like state of pure consciousness) and is capable of communicating that samādhi to the audience.

In addition to their monastic activity Gyuto monks have won renown as musicians working together with names like Philip Glass, Kitaro, etc. Discography: Freedom Chants from the Roof of the World, Voice of the Tantra, Sacred Chants of Tibet, The Perfect Jewel, Music of Tibet, Chant Retrospective 2000, Gyuto Tantric Choir, Tibetan Tantric Choir. 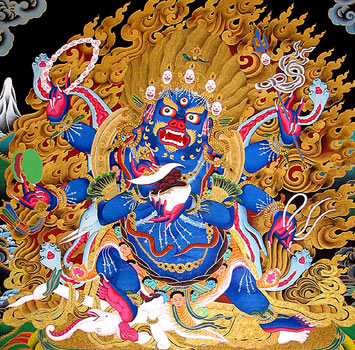 Mahākāla is the most important protector-deity of Tantric Buddhism, the wrathful form of compassion-bodhisattva Avalokiteśvara. During the ceremony, the monks invite Mahākāla to manifest himself before them, they make mental offerings, praise him, and commission him to safeguard all beings.
In the Yamāntaka ritual, the monks identify themselves with the divine “Terminator of death”. During the visualization, they enter his sacred mandala-palace, where they become channels for Yamāntaka’s stream of life-giving blessings to all beings. Although Yamāntaka manifests a wrathful, triumphal appearance, his essence is actually the gentle Mañjuśrī, the bodhisattva of wisdom. This recitation is believed to have the power to exorcise the human afflictions of anger, avarice, lust, and envy, and transform them into creative wisdom.

The practice of Guhyasamāja has particular significance to the Gelug school of Tibetan Buddhism, and also to the lineage of the Dalai-Lamas. Guhyasamāja Tantra (‘assembly of secrets’) is probably the earliest of Buddhist Tantric scriptures, attributed to Asanga, a Yogacara master of 4th cent. The Tantra states that – if psychic powers (siddhis) are to be acquired – women must always be associated with those who attempt to reach this goal. Such attainment of psychic powers and training in magic is one of the main topics of the Guhyasamāja, and some of the magic spells and rituals are clearly ancient ones in that they are also known in cultures the world over. The text also speaks of the virtues inherent in desire and sensory enjoyment, the well-being of body and mind, and of realizing the “Buddha nature” through the union of female and male. It differs from many later texts in not condemning male ejaculation but says that “when the diamond (lingam) is connected to the lotus (yoni) in the union of both polarities, one worships the Buddhas and the diamond beings with the drops of one’s semen.” We also read that the male adept, or yogi, lets his semen flow out continuously in the form of mandalas. During the chanting, the practitioners identify themselves with Guhyasamāja. 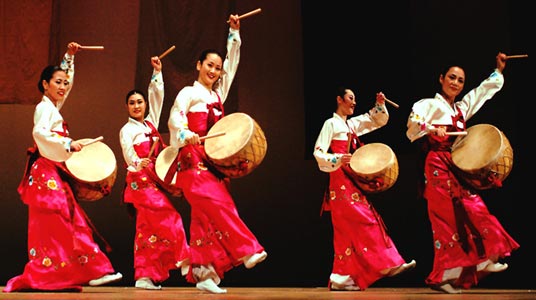