The first ever concentrated show of oriental music in Estonia, a tradition going back to the year 1992, has brought the most authentic performers from India, Siberia, Middle East, Central Asia, Far East, and South East Asia. It is certainly a leading musical event in the Baltic States where music lovers can enjoy performers like Hariprasad Chaurasia, ensemble “Kodō”, Ravi Shankar, Anoushka Shankar, Jivan Gasparyan, ensemble “Huun-Huur-Tu”, Alim Qasimov, Burhan Öçal, Sevara Nazarkhan, Gyuto and Gyume Buddhist monks, Wu Man, etc. Keep a close eye on our website and advertising – the show goes on. 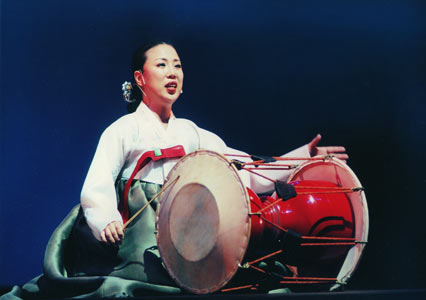 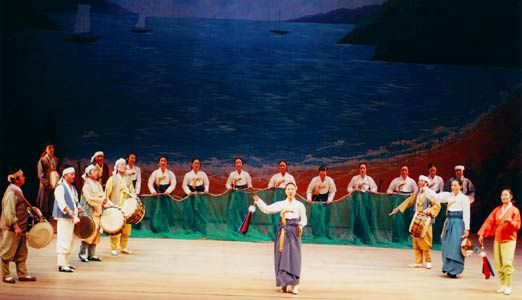 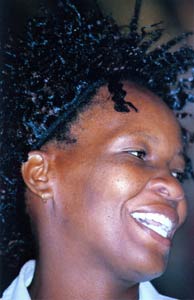 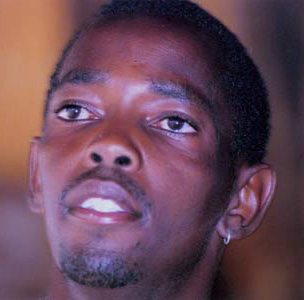 Armenian chant is the melismatic monophonic vocal art used in the liturgy of the Armenian Apostolic Church. Like Byzantine chant, Armenian one consists mainly of hymns. The oldest hymns were in prose, but later versified ones became more prominent, such as those by Nerses Shnorhali. The official book of hymns, the sharakan, contains 1,166 hymns. The source of the most traditional music is the liturgies at Echmiadzin, the religious center of Armenia. 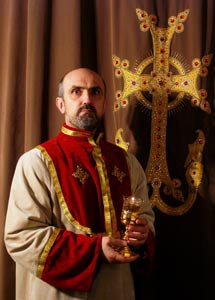 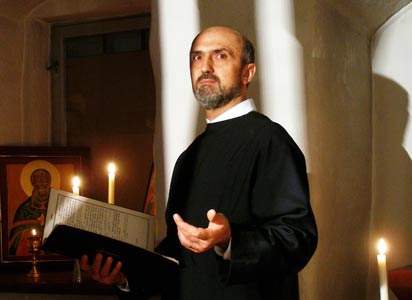 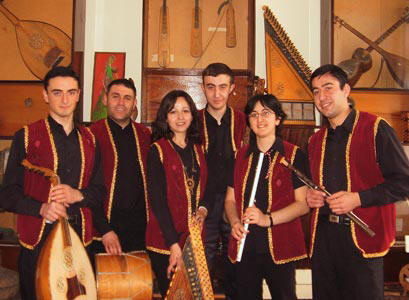 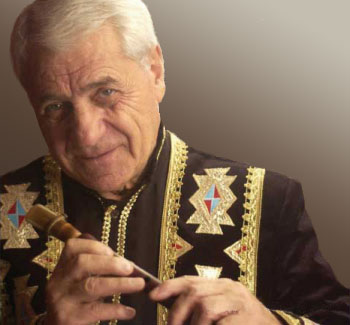 The Qur’ān (القرآن, literally ‘recitation’) is the essential sacred book of Islam. Muslims believe the Qur’ān to be the scripture of divine guidance and direction for mankind, consider the text in its original Arabic, to be the literal word of God revealed to Muhammad over a period of 23 years, and view the Qur’ān as God’s final revelation to humanity.
All Muslims must memorize at least some parts of the Qur’ān, in order to perform their daily prayers. To perform prayer, a mandatory obligation in Islam, a Muslim is required to learn at least some suras of the Qur’ān (typically starting with the 1st sura al-Fatiha). Until one has learned al-Fatiha, a Muslim can only say phrases like “praise be to God” during the prayer. The person whose recital repertoire encompasses the whole Qur’ān is called hafiz (‘reciter’ or ‘protector’). Muhammad is regarded as the first hafiz. Recitation (تلاوة) of the Qur’ān is a fine art in the Muslim world. There are several schools of Quranic recitation, all of which are permissible pronunciations of the Uthmanic rasm. Today, 10 canonical and at least 4 non-canonical recitations of the Qur’ān exist.
Sura al-Fatiha (الفاتحة‎, ‘the opening’) is the 1st chapter of the Qur’ān. Its seven verses are a prayer for God’s guidance and stress the lordship and mercy of God. This chapter has a special role in traditional daily prayers, being recited at the start of each unit of prayer.

Al-Baqara (‘the cow’) is the 2nd, and the longest chapter of the Qur’ān with 286 verses. The sura’s name is in reference to an argument between the prophet Musa (Moses) and the Israelites over a cow they should sacrifice in order to know the murderer of a slain man. It appears to be one of the earliest suras to be mentioned by name in a non-Muslim written sources. 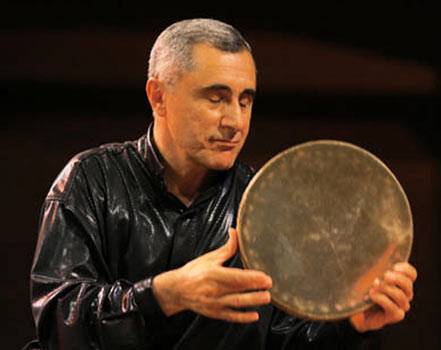 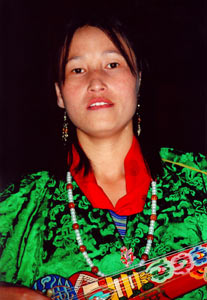 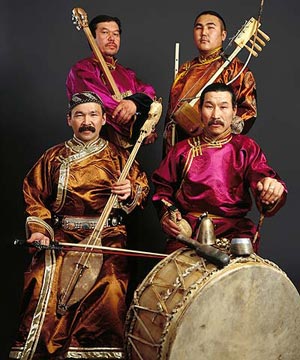 The Tuvans, a South Siberian Turkic people who number some 150,000, preserve what are arguably some of the world’s oldest forms of music-making. What binds these forms together is their use of mimesis, or imitation for aesthetic purposes. By imitating or aesthetically representing the sounds of nature, human music-makers seek to link themselves to the beings and forces that most concern them: in the case of the Tuvans, domestic animals, the physical environment of mountains and grasslands, and the elemental energies of wind, water, and light. The best known genre of Tuvan music, hoomei (throat-singing), comprises what one might call a lexicon of musical onomatopoeia in which natural sounds are mimetically transformed into musical representations.
Huun-Huur-Tu (‘sun propeller’) has emerged as the foremost international representative of Tuva’s remarkable musical culture.
“The Tuvans will ride into your brain and leave hoofprints up and down your spine.” (The San Francisco Bay Guardian)
“It is unfamiliar yet very accessible, an other-worldly but deeply spiritual music that is rooted in the sounds of nature.” (The Chicago Tribune)
“When a Tuvan sings praises of mother and country, which is what a Tuvan usually sings, he often does it in three-part harmony. By himself.” (Los Angeles Times)
“Imagine cool, fresh air, high altitudes, the wild open spaces of the steppes, rushing rivers, singing birds, galloping horses, yurts, and a culture that combines Buddhism with shamanism, and then imagine that you hear the sounds of all these elements in the music. With a beat. That’s what it sounds like.” (Union News)
“The sound is peculiar, haunting, hypnotic. It is a guttural, sometimes piercing sound of vocal chords burrowing into the flesh of mother nature. It is wind and rushing water and crumbling earth, it is called throat singing and masters of the technique are headed our way…” (The Gazette)
“The members of Huun-Huur-Tu are perhaps the best known practitioners of throat singing and accompany themselves on all manner of strange and wonderful instruments… The resulting sound is as compelling as a wild gallop across the steppes.” (The Oregonian)
“… Between verse come sounds that seem unlikely for either voice or string. They are high and whistling, like bird calls. Sometimes they are croaking, down toward the nether reaches of detectable pitch. Sometimes they have a pulsing, rolling quality sustained for lung-aching duration, sounds that seem to capture the essence of ever-flowing water and ever-blowing wind.” (The Washington Post) 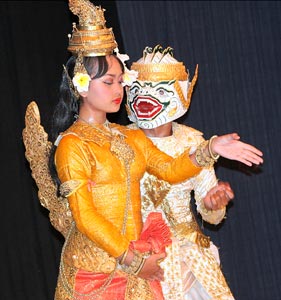 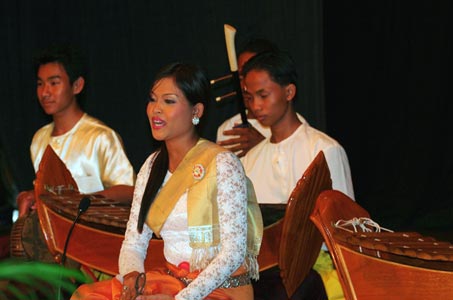 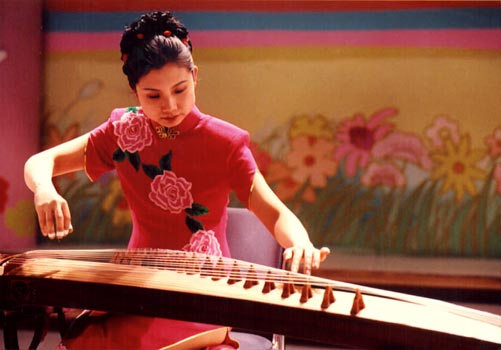 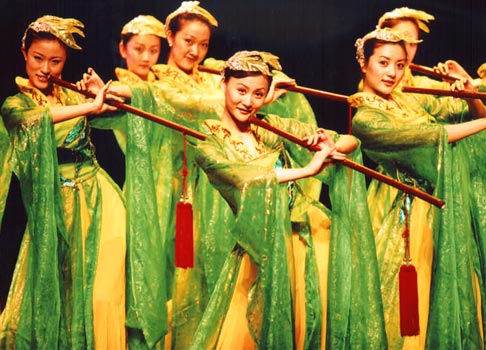 The gǔqín (Chinese 古琴; literally ‘ancient string instrument’) is the modern name for a plucked 7-string Chinese zither. It has been played since ancient times, and has traditionally been favored by scholars and literati as an instrument of great subtlety and refinement, as highlighted by the quote “a gentleman does not part with his qín or se without good reason,” as well as being associated with Confucius. The modern form has been standardized for about 2 millennia. The gǔqín is not to be confused with the gǔzhēng (古箏, another Chinese long zither also without frets, but with moveable bridges under each string. The gǔqín is a very quiet instrument, with a range of about 4 octaves. By tradition the qín originally had 5 strings, but ancient qín-like instruments with 10 or more strings have been found.

The trapezoidal yángqín (Chinese 揚琴) is a hammered dulcimer of Persian origin. The instrument was traditionally fitted with bronze strings, which gave the instrument a soft timbre. Since the 1950s, however, steel alloy strings (in conjunction with copper-wound steel strings for the bass notes) have been used, in order to give the instrument a brighter and louder tone. The instrument’s strings are struck with 2 lightweight bamboo beaters with rubber tips. A professional musician often carries several sets of beaters, each of which draws a slightly different tone from the instrument.

The suǒnà (Chinese 嗩吶) is a Han shawm or oboe developed from Central Asian surnay or zurna, from which its Chinese name probably derives. It has a distinctively loud and high-pitched sound, and is used frequently in Chinese traditional music ensembles, particularly those that perform outdoors. It is an important instrument in the folk music of northern China, particularly the province of Shandong, where it has long been used for festival and military purposes. It is still used, in combination with shēng mouth organs, gongs, drums, and sometimes other instruments, in wedding and funeral processions. The suǒnà has a conical wooden body, similar to that of the oboe, but uses a brass or copper mouthpiece to which a small double reed is affixed, and possesses a detachable metal bell at its end.

Events in co-operation with Orient

May 5th at 1 pm, The Azerbaijan Cultural Centre of Estonia
Lecture Islam and the Holy Qur’ān (in English) by Hafiz Shamsher Alam (India)