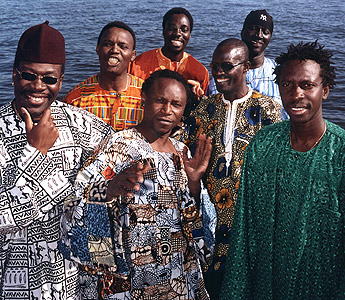 Mbalax (or mbalakh) is the national popular dance music of Senegal and the Gambia. Mbalax is a fusion of popular Western music and dance sabar, the traditional drumming and dance music of Senegal. The genre’s name derived from the heavy use of accompanying rhythms used in sabar called mbalax. Mbalax developed in Senegal in the late 1960s and early 1970s. Influenced by the “back to roots” philosophy of Negritude and the receding influence of colonialism, artists began to mix these sounds with traditional Senegalese music and forge new sounds incorporating their new national identity. Musicians began singing in Wolof (Senegal’s lingua franca) instead of French and English, and incorporated rhythms of the indigenous sabar-drum. Dancers began using moves associated with the sabar, and tipping the singers as if they were traditional griots. However, it’s sabar rhythms and Islamic influenced vocals continue to make mbalax one of the most distinctive forms of dance music in Western Africa and the diaspora.

The history of the specific Drikung Kagyu vajra dances began in 13th cent during the term of then 10th Drikung throne holder Nyer Gyedpa Dorje Gyalpo. Further dances were added by later successors to the throne and the tradition of the vajra dances spread to various monasteries through Tibet. In 15th cent, the Phiyang monastery was founded in Ladakh by Choje Dhanma Kunga Dagpa who came from the area of Mt Kailash, Tibet. Later, in 16th cent, the vajra dances were introduced there by Choje Gyaltse Tsang. The traditional dances and music which are performed nowadays at Phiyang monastery, are very authentic, without any Western nor modern influences. 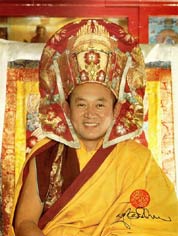 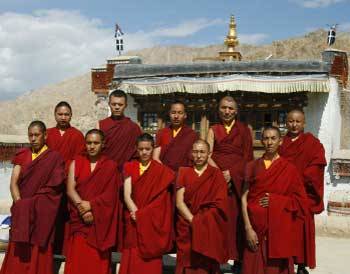 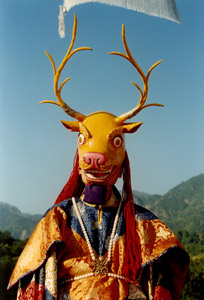 There are at least four vocal styles in use in Tibetan Buddhist monasteries. The basic difference between them is the way in which the sounds are created. Chants may be sung using the normal sound, which is the everyday voice used for speaking and singing. Chanting in an extremely low voice is, however, more common. Sometimes it is difficult to believe that it is possible for a human being to produce such deep sounds. Technically, overtonal guttural singing is the most complex. Two or three different sounds can be distinguished simultaneously: a basic tone and one or two overtones, which somehow seem to be unnaturally forced and emphasised. The strained glottal way of singing does not allow for complicated melodies. Archaic recitative tunes usually range from three to five notes. A later influence of Tibetan folk songs has expanded the scope of melodies to a 7-tone scale. 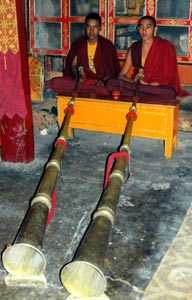 Musical instruments:
Dung-chen is the largest trumpet-like instrument used in Tibetan Buddhist ritual music. These instruments are generally between 2 and 3 m in length, but may be as long as 4.5 m. The telescopic tube is made of copper or brass, and the more expensive instruments are decorated with spectacular engravings. To be played, the large instrument usually is fixed on a wooden stand. The dung-chen creates an extremely low bass sound. This instrument is not primarily used for melodies, but for the basic tone and occasionally for octaves as overtones. In order to get a continuous sound, the instruments are always used in pairs, and the two players must not simultaneously pause for breath.
The principle of generating sound with the kang-dung or kang-ling, another wind instrument, is similar to that of trumpet. Originally, this instrument was made of a thighbone of a young girl who had, preferably, died a virgin. This is because the sound of the kang-dung symbolizes purity; therefore the instrument was to be pure.
Dung-kar is a ritual wind instrument of Indian origin, made of a conch shell. Already known in India during the Vedic era, it has been used ever since in sacred, folk and military music. The dung-kar has always been regarded as a sacred object. In Indian mythology, it is known as Vishnu’s weapon. The dung-kar has a mystic timbre and a hollow, deep vibrating tone. Its sound symbolizes purity and devotion. Its sanctity is so universal that is used as a ritual instrument in the Vedic religion, Hinduism and Jainism, as well as in Hinayāna, Mahāyāna and Tantric Buddhism.
Gyaling is a close relative of the oboe. The instrument is a conical wooden tube with a metal funnel at one end and a metal tube with a double-reed mouthpiece at the other. The gyaling is often played with the so-called circular respiration technique, which permits continuous emission of sound without having to pause for breath. Complicated melodies can be played on this musical instrument, but skill and tenacity are required. Consequently, no beginner is trusted to play the gyaling.
Drilbu, which is of Indian origin, may be considered either a musical instrument or a cult object. In combination with the dorje, it plays a major role in Vajrayāna Buddhist rituals. The drilbu is a bronze, copper or silver bell. The total length with its handle is approximately 20 cm. When played, the bell is always held in the left hand. When the handbell is shaken, the clapper inside it creates a high piercing sound that symbolizes ultimate transcendental wisdom.
Damaru is a small, hourglass-shaped hand drum that is used in many parts of Asia. As the legend tells, this drum consists of parts of two human skulls. It is said that the dead whose skulls have been made into drum speak to us in the language of the sounds of a damaru. According to a Hindu belief, the universe was created by Shiva with the help of a damaru. The drum has 2 small leather balls attached, sometime with female pubic hairs in one of the balls and male pubic hairs in the other, symbolizing the unity of male and female principles. When the drum is swung, the balls begin to oscillate, hitting the leather membrane, create a heavy rattling sound.
Nga is a large ritual drum with 2 membranes. Although the nga is only about 20 cm wide, it has a low droning sound, owing to the large diameter of the membranes. A bent piece of wood, in the shape of a question mark, is used as a drumstick.
The silnyen and rolmo are cymbals. In sacred music, they can be used in two different ways: either to provide particular emphasis in orchestra performances or to create a low monotonous background to text recitation.

See also photos from the tour in Estonia, Latvia and Russia