The taiko ensemble Indra was founded in 2013 by Ishizuka Yū (b 1978), the eldest son of a well-known Nō-theatre musician (hayashikata) Mochizuki Saburō.

The name “Indra” refers to one of the main Gods in the Vedas. Ishizuka Yū is also known under the name Takewaka Mochizuki or hōgaku-bayashi-kata meaning that he has been officially acknowledged as a bearer of Mochizuki tradition.

Besides Yū, 4 other members belong to the ensemble, among them Yū’s sister Eri who has also received an education in the traditional music studying different flutes and percussion with her father and other great masters. Indra’s musicians pay a lot of attention to choreography and master Japanese classical dance – hayashi and buyō styles as well as lion dance (shishimai).

A characteristic trait of the ensemble are their compositions based on the Nō and Kabuki traditions as well as different taiko playing techniques from various festivities which charm the audiences by their rich sound and virtuosity. 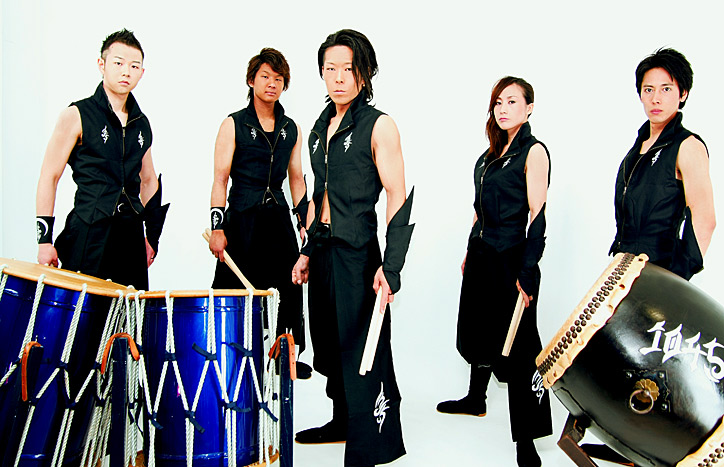 Taiko (太鼓) means ‘drum’ in Japanese. Outside Japan, the word is often used to refer to any of the various Japanese drums and to the relatively recent art-form of ensemble taiko drumming. Taiko drums have been developed into a wide range of percussion instruments that are used in Japanese folk, ritual and classical musical traditions.

Taiko, in general, are stick percussion instruments. With the exception of the kotsuzumi and ootsuzumi, all taiko are struck with bachi. They have heads on both sides of the drum body, and a sealed resonating cavity. Taiko are also characterized by a high amount of tension on the drums heads, with a correspondingly high pitch relative to body size. This high tension likely developed in response to Japan’s wet and humid summers when most festivals take place. Many taiko are not tunable, and a drum with high head tension would counteract the slacking effects of humidity.