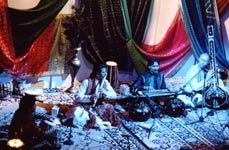 Mustafa Raza was born in 1958 in Delhi in a famous family of musicians. His father and teacher, Ustad Ahmed Raza Khan has taught him khayal-singing in a traditional way of so-called guru shishya parampara. Raza’s family associated with the Moradabad gharana through his grandfather Ustad Chajju Khan, a court musician. An All India Radio musician with the A grade, Mustafa Raza is frequently invited to perform in the prestigious festivals in Europe and India. Twice (1995, 2005) he participated in festival Orient. Vichitra vina (vichitra means ‘unique’) is a very rare North-Indian string instrument.

Aditya Kalyanpur: a prize percussionist of the younger generation in India. Aditya has studied with tablā virtuosos Ustad Alla Rakha and Ustad Zakir Hussain. At the age of 11 he received a special grant at the Indian competition of young talents. Some of his achievements are: Indian National Grant of Music, First Award of Pandit Jasrai Competition (Mumbai), Taal Mani title and Vidyasagar Award. He has performed on various TV channels and at prestigious concerts in India and abroad as soloist and together with Zakir Hussain, Ustad Shamim Ahmed Khan, Ustad Sultan Khan, Pandit Satish Vyas, Pandit Nayan Ghosh, Pandit Bhawani Shankar, kathak-dancers Shama Bhate, Sunayana Hazarilal and Madhurita Sarang.

Brian Melvin: a highly appreciated versatile musician. He has studied with Alla Rakha, Zakir Hussain (tablās), Kwaku Daddy (African drums) and Armando Peraza (Latin American percussions). Played together with many great names: Joe Henderson, Mike Stern, Bob Weir anda Greg Allman. Brian has released five CDs together with the bass legend Jaco Pastorius (“Standards Zone” was the number one album on the jazz top ten list for 15 weeks running (!). He is a member of two trios: Beatlejazz and Fog as well as the author of the book Tao of Drumming.

Ustad Siraj Ahmed Khan: a singer who has been awarded various titles and and pri zes. His roots go back to the legendary composer Miyan Tansen – a court musician of the great Mogul Akbar. Siraj Ahmed Khan’s grandfather was a veteran of Hindustani classical music Ustad Tajummul Hussain Khan and his father was a singer. Siraj has participated in music festivals of India, London, Amsterdam, Hong-Kong, Nairobi, Muscat, Dubai and Paris. In honour of the 50th anniversary of the Republic of India he composed a work Parchhaaiyaan (Reflections) and Nehru Cultural Centre has commissioned ballet music by him.

Vaqar Ahmed Khan: a tablā-player, a ghazal-singer and a composer of film music, comes from a famous family of musicians. He has studied singing and ghazal-style from his father, a renowned singer Ustad Taj Ahmed Khan and tablā with Ustad Nizamuddin Khan, Dabhan Khan and Alla Rakha. Vaqar has given performances in a large number of countries on different continents. 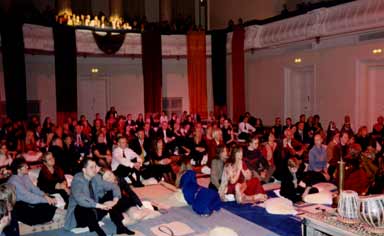 The drum magic by Aditya Kalyanpur gave an impression that this is the limit of human means, as denser beatings will not be perceived by human ear any more and in addition to all that those extra beats in another timbre. A pure mental journey is a sublime phenomenon and concerts like that undoubtedly raise the emotional intelligence of the listeners, being may-be even a substitute of religious rituals. When, after a long time I opened my eyes I felt that the surrounding ambience, people’s faces as well as my own image of myself had changed. It is not often that one attains to those unnamed moments of inner perception. /…/ Mustafa Raza became customarily ecstatic together with the development of the raga and the sound of his instrument’s sharper dashes began to remind psychedelic jams of the Mahavishnu Orchestra. /…/ A friend of mine joked after the concert: “So, let’s go and smash our own drums now.” (Lauri Sommer, Muusika, No 2, 2004, Estonia)