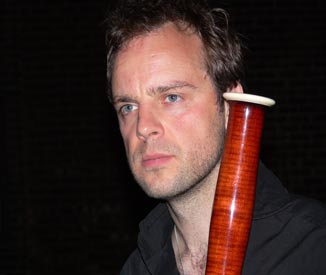 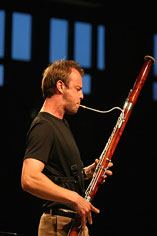 Estonian born bassoon virtuoso, Martin Kuuskmann is a commanding force bent on redefining the bassoon as a top caliber solo instrument. His charismatic and entertaining performances throughout the world have earned him repute as one of the leading instrumentalists around. The New York Times praised Kuuskmann’s playing as “dynamic… amazing… gripping…” and in 2007 he received a Grammy Nomination for his recording of Chesky’s Bassoon Concerto and in 2017 for recording of Theofanidis’ Bassoon Concerto (ERP 8215).
Kuuskmann has appeared as soloist in the New York Philharmonic series performing Luciano Berio’s Sequenza XII for bassoon solo, the Macao Orchestra, Estonian National Symphony Orchestra, Nordic Symphony Orchestra, Sinfonietta Rīga, Absolute Ensemble, Tallinn Chamber Orchestra, Symphony Orchestra of the NorrlandsOperan in Sweden, among many others, and in venues such as Carnegie Hall, Lincoln and Kennedy Center. Kuuskmann conducts master classes and is the woodwind coach with the Baltic Youth Philharmonic at the Usedom Music Festival in Germany at the invitation of Kristjan Järvi.

A founding member of the Grammy nominated Absolute Ensemble, Martin Kuuskmann has been a featured soloist in Michael Daugherty’s virtuosic and madcap concerto, Dead Elvis, a work Kuuskmann has performed nearly 50 times around the world receiving wide critical acclaim. As a soloist, Kuuskmann has recorded on Chesky Records, CCn’C and ERP record labels. His world music album on Erdenklang Records, The Path of Mantra, combines solo bassoon with the chanting of the Tibetan monks and electronic sounds by Peeter Vähi. Kuuskmann’s solo performances have been broadcast on BBC, CBC, NPR (wnyc, wfmt, etc), Hong Kong Radio as well as on numerous European radio stations.
Kuuskmann has appeared as a solo principal bassoonist with the Seoul Philharmonic at the invitation of Myung-Whun Chung. He was the solo principal bassoonist of the Nordic Symphony Orchestra from 1998-2001. While living and freelancing in New York City he appeared regularly as principal bassoon with the Orchestra of the St Luke’s, Orpheus Chamber Orchestra, the New Jersey Symphony Orchestra, Miss Saigon on Broadway, to name just a few. After moving to the Seattle area he continues to record on numerous motion picture soundtracks.
Born in Tallinn, Martin Kuuskmann graduated from Tallinn Music High School and received degrees at Manhattan School of Music and Yale University School of Music. His mentors include Stephen Maxym, Frank Morelli, Rufus Olivier, Vernon Read, and Ilmar Aasmets. As a highly in demand teacher, Kuuskmann has and continues to give lectures and master classes in major conservatories and universities in North-America and Europe. Kuuskmann is a member of a New York based new music ensemble Sequitur, and a former member of the New York Lyric Chamber Music Society, where he has premiered numerous solo chamber works and conducted educational projects. Kuuskmann is a faculty at the Manhattan School of Music Contemporary Performance Program. While not on his travels he

enjoys teaching his private studio of students from his home in Washington state. 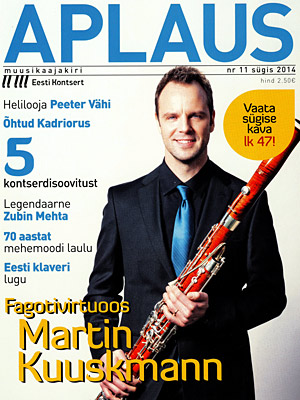 The evening’s other guest artist was the amazing bassoonist Martin Kuuskmann, who is intent on having a successful solo career, not exactly common among players of his instrument. Mr Kuuskmann has won considerable notice for his dynamic performances with the Absolute Ensemble, especially his solo turn in Michael Daugherty’s Dead Elvis, which Mr Kuuskmann performs as an Elvis impersonator, complete with gyrations and glittery costume. (Anthony Tommasini, The New York Times, 21.05.02, USA)

But bassoonist Martin Kuuskmann steals the show for his swaggering performance of Michael Daugherty’s Dead Elvis, complete with glittering costume. Thank You very much. (The Australian, 04.10.02, Australia)

Martin Kuuskmann, bassoonist, operates under a peculiar handicap. The moment he steps onto the stage, the audience falls head-over-heals in love with him. Here’s a guy who laces a serious concert with a dry sense of humor that is almost corny at times, and he gets away with it. He’s caught in the web of charisma… (Richard Clark, The Northern Light, 20.01.05, USA, whole article)

Martin Kuuskmann shows without question that there is very little that he can’t do on the bassoon. His technique and virtuosity are remarkable throughout – from double tonguing to circular breathing to multiphonics to incredible high notes to you-name-it, he does it all! (International Double Reed Society Magazine)