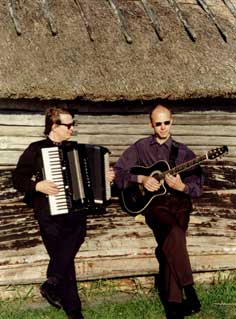 Free bass piano-accordion together with acoustic steel guitar (tuned C-G-D-A-E-G) – a new approach in the Baltic region. Beside the traditional Estonian folk tunes, Henn Rebane and Robert Jürjendal are using different sounds and rhythms of the World Music, building a bridge between old and new. New Folk Duo plays music the roots of which are deeply in their country.

This joyful New Folk Duo is coming from Estonia, a small country on the Baltic Sea. Even before the relatively recent political re-independence came true, Estonia was regarded as a fairly original islet on the musical map of the world.
Duo, started in Oct 1996, is playing music, which is based on old transcriptions. These Estonian folk songs and tunes have been collected and selected at the beginning of the 20th century, during several expeditions arranged by music students and conductors like Cyrillius Kreek and Peeter Süda.
Free bass piano-accordion together with acoustic steel guitar tuned C-G-D-A-E-G), is a new approach in the Baltic region and farther.
The arrangements of the pieces are inspired by an interesting original material (each piece has its own character, background and story), fixed with free improvisations of both musicians. Beside the traditional Estonian folk intonations, Henn Rebane and Robert Jürjendal are using different sounds and rhythms of the World Music, building a bridge between old and new.
New Folk Duo plays music the roots of which are deeply in their country and leaves are like continuing discoveries and experiments of the players.

Henn Rebane is undoubtedly one of the most outstanding accordion players in Estonia. After graduating from Estonian Academy of Music he played in early music consort Hortus Musicus. Since 1980 he has been making tours in several countries: Sweden, Finland, Hungary, Portugal, Japan, India. He has organized several Accordion Festivals in Estonia, participated in the work of the International juries. In 1990–94 he taught accordion at Kokkola Conservatory, Finland.
Besides the academic and the traditional accordion music he has studied and played music from the other countries, including French musette, cajun and also rock music.
At the present time he is working as a free-lance musician and lector. He has written and published pedagogical materials and articles, including a weekly accordion program at Estonian Radio. Henn Rebane has worked with many artists and recorded 3 solo CDs.

Robert Jürjendal has studied classical guitar and composition. He has composed works for guitar and piano, including music for films, art exhibitions and performances. He is participating in various Guitar Craft activities, as well as courses and performance projects (tour with The Berlin Guitar Ensemble in Aug 1996). Since 1993 he has concentrated on contemporary guitar music and worked with Weekend Guitar Trio (1st Prize at Lausanne International Guitar Competition 1995). He has recorded 2 CDs with Weekend Guitar Trio and toured in Finland, France, Switzerland, Baltic States, and Russia. He works with Trio Fragile (ambient project with guitar, electronics, drums and live painting).