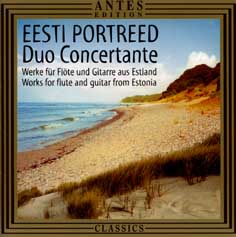 A good collection of chamber music for guitar and flute by the mid-generation of Estonian composers Kõrvits, Eespere, Vähi, Sisask and others performed by Tiit Peterson and Tauno Saviauk – probably the most brilliant masters of these instruments in Estonia.

The present CD of Duo Concertante – Tiit Peterson (guitar) and Tauno Saviauk (flute) – bears a significant title “Portraits Of Estonia”. Most of the pieces selected for this CD have been written in 1991–1999 and are dedicated to Tiit Peterson and Tauno Saviauk. So, “Portraits Of Estonia” is at the same time a portrait of two musicians as well as a portrait of Estonian newest music. And even more, it is also a set of self-portraits of seven Estonian composers. Whatever the idea or subject matter of the work might be, composer always leaves his self-portrait in it.
See also other recordings by Tiit Peterson: “White Concert”

Raimo Kangro (1949–2001) is perhaps the most well-known portraitist among Estonian composers. His series “Display” consists of 11 musical portraits for various chamber ensembles, including portraits of Steve Reich, Mozart and Schubert. The idea of the composition is play and simple charm of playing is typical to Kangro’s musical handwriting as a whole. In his piece “Alla sincerone” (1998) the flute melody can be characterized as a neoromantic cantilena, guitar playing the role of harmonic and rhythmic accompaniment. All together it makes a colourful and exciting landscape of simple images.

Tõnu Kõrvits (1969) can be considered as an aquarellist in music. His compositions are always picturesque and they even share the artistic sense of the works of impressionists. In Two Preludes for guitar (1995) the composer’s idea is to avoid complicate rhythmic schemes in spite of multitude of triplets and quintuplets and thus the musicians should perform the preludes in relatively free movement and with free romantic breathing. In his guitar music, a number of hidden elements and intonations of pop music can be discovered.

Ester Mägi (1922) seems to paint beautiful Estonian landscapes − virgin forests, intact lakes and old-fashioned farmhouses in her music. In Mägi’s compositions tight contact with Estonian folk music appears, her chamber works can be characterized as lyrical and deeply poetical soundscapes. A due (1997) for the flute and the guitar is not an exception – fragile and airy images draw our attention. In this piece intonations of Estonian national music appear to some extent less than in her other chamber works. Here the composer has rather expressed most sensitively the general mentality of Estonian folk-lore.

Peeter Vähi (1955) appears sometimes as a graphic artist (Four Engravings Of Reval), in some works you can feel a touch of Dalí’s surrealism (To His Highness Salvador D). Peeter Vähi seems to be familiar with both Chinese silk painting and pop art – East and West as well as intonations of Baroque and pop-music interlace in his works. Dance Of The Moon Goddess won the 2nd prize at the contest of composers in 1996. As an impressive composition performing the variety of technical possibilities of the guitar, it is one of the favourite pieces in Tiit Peterson’s concert programs. Here rhythm is no less important than soundscape − guitar is sometimes used even as a percussion instrument. It makes a perfect suggestive accompaniment for the mythic dance of the goddess. Mystical Uniting (1991) has an effect as Eastern and Western frames of mind meeting each other – we can hear both meditative and improvisatory moments and it allows us to place the piece under the term “cross-culture”.

Jaan Rääts (1932) is the abstractionist in Estonian music. His works are well-proportioned and sometimes even organized by geometrical regularity. In Nameless Music (1999) repetition of images is significant – Rääts seems to be drawing a pattern of images. At the same time this repetition is more of neo-classicist and neo-baroque than of minimalist origin. Nameless Music is technically rather complicated both for the flute and for the guitar, that is why composer leaves the musicians a free hand in interpretation. His works starting with his first instrumental compositions written 40 years ago can be characterized as active and energetic.

René Eespere (1953) is rather a graphic artist than a painter. Exact details and clear figures of melody allow us to compare him with masters of etching. Evocatio (1996) is dedicated to Tiit Peterson and won the 1st prize at the contest for guitar compositions. Inner tension and dramatism are achieved with the help of gradually cumulating culmination, which is followed by minor final resolution as a poetic generalization. The title as well as the message of the piece are ambiguous and leave the listeners enough space for their phantasies. Modus vivendi (1998) seems to draw a picture of the turbulent lifestyle of our time and all means for survival (this is the indirect meaning of the title) are welcome.
See also other recordings of Eespere on ERP: In dies, De spe, Februa, Respectus, Locus amoenus.

Urmas Sisask (1960) paints the universe – galaxies, constellations, planets and comets. Sisask gets his inspiration from the mysterious starry sky, the core of his astromusic theory being a vision of music in harmony with universe. The Hale-Bopp Comet (1999) is the first composition, in which Sisask uses guitar. Main idea of the piece is coming, staying and leaving of the comet. Repetition of the E-note on the guitar and the flute makes an impression of a brightening spot in the night sky − we can already have a glimpse of the comet even when it is still far away. When the comet comes nearer and nearer, around the E other notes start assembling − the comet is becoming bigger and the sounds turn more and more intensive. At the same time music is becoming more and more “Spanish”, especially in the second phase of the composition, where we can even hear the intonations of flamenco. So, when Sisask starts to paint a comet he could very easily end up painting corrida.
See also other recordings of Urmas Sisask: Celestials, Galaxies.

Distribution in Estonia by Edition 49, and in Germany by Bella Musica Edition