Ensemble Ülger comes from Khakassia, a country of endless steppe and taiga, at the foot of the Sayan-Altai Mountains in southern Siberia. The ensemble was formed in 1989 by young musicians who were dissatisfied with the existing Soviet music folklore, and it remained the leading ensemble for Khakas folk music and dance ever since.

Ensemble Ülger participated in many festivals and competitions, both within Russia and abroad. They excelled in Belgium, Switzerland, Poland, and The Netherlands; in 2005 they took the Grand Prix price at the 3rd Sayan Ring Siberian World Music Festival; and since 2006 they frequent the South of France, most recently at the Russian Art Festival 2011 in Cannes.

Since 2003 ensemble Ülger works under the artistic direction of Kuchen Ayhayrkh San − an exceptionally gifted musician, virtuoso of throat-singing, and bright multi-instrumentalist.

Ülger means “Pleiades”, the winter stars that rise in early autumn and announce the long, dark, cold season. People believed the Pleiades to be the place of residence of powerful heavenly beings who decided upon one’s fate.

The Khakas people consist of several ethnic groups who understand each other. In the early Soviet period they were restructured as “Khakas”, but they call themselves “Tadar”. In the North of today’s Khakassia live the Khyzyl people, in the central part the Khaas people, and in the South the Saghai, Khoibal, and Piltîr people.

The Khakas people were known for their rich storytelling traditions, both in poetry with throat singing and an accompanying string instrument, and in unaccompanied prose. Besides storytelling, they had a wide range of ceremonial songs, wedding, lyric and improvised songs, dirges and laments, instrumental music and various kinds of ceremonial dance. 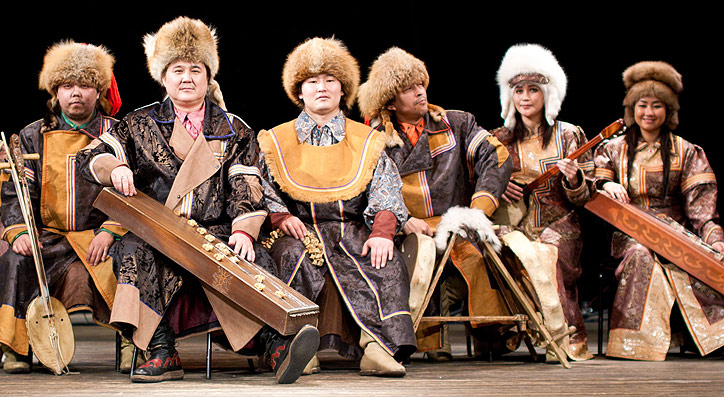