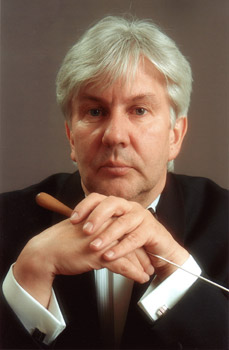 Conductor Endel Nõgene with a career of more than 30 years in an opera theatre where he has staged over 60 operas, ballets and operettas and conducted 3120 performances, is first and foremost known for his deep expertise in operetta. Music reviewers call him a hardened romantic who excels in flexibility and his will of co-operation. His most cherished composers have been Puccini, Verdi, Donizetti, Rossini, Tchaikovsky as well as operetta music, hence, he has conducted delightful operetta-galas.
“Theatre-life can be compared to a kaleidoscope where each smallest stone changes the total picture,” said Nõgene at the concert of his “30-years on stage” anniversary. “One of the brightest and most colourful particles in that kaleidoscope is operetta with its beautiful music, joyfulness and gypsy tunes used by almost all operetta composers of the world.”
Endel Nõgene graduated from the Estonian Academy of Music in 1974 majoring in trumpet under the supervision by Helmut Orusaar and later as conductor under the supervision by Prof Roman Matsov. During the years 1975−1977 he studied orchestra conducting with Prof Viktor Fedotov at Leningrad State Conservatoire followed by post-graduate studies with Prof J Aleksa in the Lithuanian National Opera. He has taken follow-up courses and attended master-classes in Potsdam, Vienna, Berlin, Bayreuth, Munich, and Zurich.
The first ever time to conduct an orchestra for Nõgene was at Tartu University Assembly Hall in 1968. In 1974 his conducting debut with operetta La Périchole by Offenbach in Vanemuine Theatre made a solid foundation to his theatre career. In 1974−1981 he was a conductor in Vanemuine, in 1977−1979 at the Lithuanian National Opera, in 1979−1987 at the Estonian National Opera, in 1980–81 and 1987–99 he was music director and chief conductor of Vanemuine, in 1999−2004 a conductor at the Estonian National Opera. Currently he is the guest conductor of the two latter. Nõgene has co-staged several Italian operas as an assistant to Alberto Zedda and Carlo Felice Cillario as well as assisted Maestro Neeme Järvi with his master-classes during the years 2000–07.
Endel Nõgene has conducted a number of symphony concerts in Estonia as well as in Finland, Sweden, Germany, Armenia, Russia, Latvia, Lithuania, Romania, and the Czech Republic; among the afore-mentioned appear concerts in the Hall of Berliner Philharmonie and festivals in Romania, Aachen, Brandenburg, Karlsruhe, and Riga. He is the artistic director of Ferenc Lehár Orchestra and artistic director and chief conductor of the Nordic Baltic Youth Philharmonia. In addition to all that he is also engaged in teaching, the longest co-operation in this field being with the Opera Department of the Estonian Academy of Music and Theatre. In 1992 Nõgene was elected a member of Europäische Musiktheater-Akademie and was a member of the Board until 2001. He has been in the Jury of several international conducting and singing competitions.
Maestro Nõgene has been awarded the Best Conductor prize on multiple occasions by the Estonian Ministry of Culture and the Theatre Union.

Debussy. Prelude To the Afternoon of a Faun, fragm, live rec, 112 sec, mp3

… the guest conductor put a special stress in bringing out Tchaikovsky’s fine sound-scapes. The Music Director of Tartu Vanemuine skilfully painted a musical picture of tender sensibility and a bursting temperament in Symphony No 5. Nõgene convincingly and consistently built up the symphony with his precise movements remaining analytically clear in achieving the final result. The mature orchestral sound was accompanied by rhythmic brightness that gave the whole work brilliant contours. (Walter Grampe, Mitteldeutsche Zeitung, 12.04.99, Germany)

Endel Nõgene is an amazingly good conductor! He has very precise and expressive movements that leave no room for empty gesticulating. The orchestra, truth to be told, ennobled by additional force from Tallinn, displayed extremely high musical culture under his baton. (Margo Kõlar, Sirp, Apr 1999, Estonia)