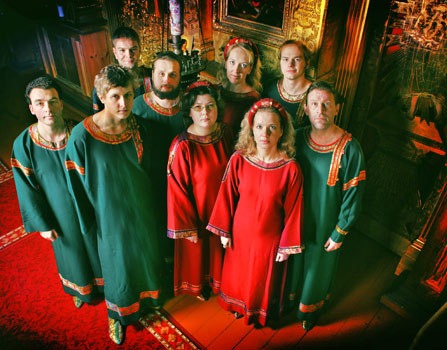 Despite the fact that the ensemble’s name refers to Orthodox, this time they actually also perform songs based on the Old Believers’ or Starovers’ texts. The concert venue is all but conventional. Piirissaar in the middle of the lake Peipsi boasts of three villages – two Russian and one Estonian – with the population mostly being Old Believers. The islanders have somehow been estranged from the life on the mainland and sort of remained forgotten by everybody. Though the concert takes place outside of Tartu, it is not meant for the islanders only, but rather more for Tartuvians and other mainlanders with special transfers being arranged by the festival. Get to know our own versatile cultures!

The ensemble Orthodox Singers, consisting of professional musicians, was born in 1989 on the initiative of Valeri Petrov. The collective’s repertoire includes both early and modern orthodox music and in addition to foreign composers, works by Pärt, Kreek and Tormis are often performed. The ensemble’s performances are characterized by a complete immersion in every word of the scriptures, impeccable vocal technique, well thought-out dynamical plan and extraordinary sense of style. The critics have also repeatedly highlighted the ability of the collective to maintain the uniformity of the performed work. The ensemble has given concerts in many European countries, Russia, Lebanon and the United States as well as participated in several international festivals.

The concert ticket includes bus and boat transportation from Tartu to Piirissaar and back. Buses to Laaksaare harbour will depart from the parking lot in front of the Tartu Vanemuine theatre on Sunday, July 12th at 10.30. The return time is approximately (!) by 7 pm.