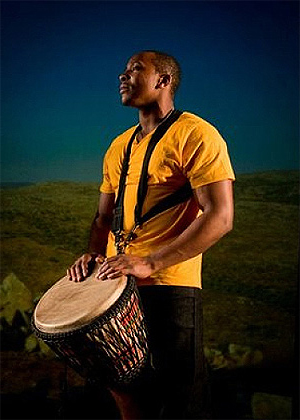 Idd Aziz’s musical style is reminiscent of Lokua Kanza, Youssou N’Dour and Ismael Lo all rolled into one. It is a form of Afro-fusion music.
His passion for music begun at the early age of 13 and followed with a tour of the world at the age of 15! Inspired by his father, Idd Aziz has been placed on this planet to inspire positive change and awakening through his music and performances.
Kenyan born Idd Aziz is completely dedicated to becoming one of the most empowered and awakened male vocalists possible.
Idd Aziz has reached a platform in his musical growth where he is ready to share his knowledge and talents with others to create an awakening of like-minded upcoming musicians. He understands that a great way to uplift society is through quality conscious music. He has spent most of his life training for this. Idd Aziz’s combination of the expressive, compassionate and the soulful creates a unique sound for the musical market worldwide.
His passionate, cultural music has influenced great diversity in his vocal style. His vocals come from a deep place within his heart and can be felt clearly by any listener. His style combines world sounds with deep African roots. Idd Aziz plays the guitar- and flute-like instruments, also a variety of African percussion. As a singer and songwriter, Aziz has worked with some well known music writers including Henning Siumaro and Trondheim Orchestra, just to mention a few.
Idd Aziz appears live with a full band or smaller ensemble at music & art festivals, benefit concerts, community centers, private parties and gatherings. He recently performed at FAFA 2014 Gala Show in Nairobi, Kenya. He has also played with such noted musicians as Angelique Kidjo, Salif Keita, Alpha Blondy and Youssou N’Dour.